Gayle Lemmon On The Remarkable Fighting Women Of Afghanistan 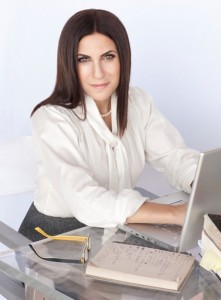 Gayle Tzemach Lemmon is a seasoned journalist who has been reporting and researching the economic and living conditions of women in Afghanistan since 2005.

I read her heartbreaking story in “The Daily Beast” recently about Bibi Aisha, an Afghan teenager whose nose and ears were cut off by an uncle when she tried to escape from an intolerable marriage. Another article about an 11-year-old bride who was sold to a Kabul family and escaped was equally powerful and disturbing.

Gayle was a producer with ABC News for nearly ten years, a Fulbright scholar, and is the Deputy Director of the Women and Foreign Policy Program. Next year her book about women entrepreneurs in Afghanistan and other war-torn countries will be published. To find out more about Gayle’s background, visit her website.

“People do not often hear stories about how hard women are fighting to create something better for the next generation.” Gayle Lemmon

THE WOMEN’S EYE: Your reporting is extraordinarily informative about the experiences of women in Afghanistan. It is, in many cases, gut-wrenching. What motivated you to write about this country and its women?

GAYLE:I began writing about women entrepreneurs during and after the conflict in 2005. This work brought me to Afghanistan, where I interviewed some compelling entrepreneurs working hard to create something better for their country.

I realized that you cannot write about economic issues facing women in Afghanistan without also examining the social and political circumstances they’re living in, so that is how I began to do stories about issues such as women in the security forces, domestic violence and child marriage.

The remarkable women I write about and their stories are what keep me going. People do not often hear stories about how hard women are fighting to create something better for the next generation; it is an under-reported story.

EYE: You broke the unforgettable story of Bibi Aisha, the teenager who was horribly attacked by an in-law as Taliban were watching. She managed to escape to a shelter in Kabul and is currently in California for treatment. Her photo on a recent Time Magazine cover generated a lot of discussion. You comment on the effect of that cover story at cnn.com. How difficult are those kinds of stories to report on? How important are they?

“You cannot imagine the lack of humanity.”

GAYLE: These kinds of stories are incredibly difficult to write about and equally important to put out there. It was shocking to me when I first met Bibi Aisha to think that someone had actually done this to another human being.

You cannot imagine the lack of humanity. I think these pieces are so important, though, because they reflect the very uncomfortable reality of some of what is happening in Afghanistan. And the positive aspect, which is that these women are able to get help because a shelter system is now in place to offer them safe haven.

EYE: You also wrote about the courageous escape and rescue of Obeida, the 11-year-old girl who was sold for money and forced to wed. You reported that for every Obaida who is rescued, there are thousands who aren’t. What will it take for this barbaric practice of child marriage to stop?

GAYLE: Education, time and criminal punishment are required to stop the practice of child marriage. It will take time and real examples of men who are punished for selling their children to create change.

Educating the next generation will also make a great difference. But the economic piece cannot be ignored; families are selling children because they are worth money. If there is no market, the incentive goes away.

EYE: You write that women are now being trained for police duty, to be midwives, that they are becoming entrepreneurs and slowly becoming a part of the government. Are the lives of women improving on some level?

GAYLE: Yes, certainly, depending on the security situation in the area in which they live, women are changing their own lives for the better and seizing pockets of opportunity to create something better for their families. You see that over and over again: that women are grabbing for themselves the opportunities now available to them.

In regions where security is either in tatters or in the process of unraveling, this is, of course, far more difficult. There women are forced to play defense and protect the few gains they have been able to make since 2001.

EYE: You mention Women for Afghan Women, an organization that is providing shelter for women involved in violent situations. What kind of success have they had as a protective force?

GAYLE: They and other organizations running shelters in Afghanistan have made a large difference in creating for the first time a safe haven for women who have suffered abuse at the hands of their family. They also offer literacy courses, which can open new worlds for women who participate in them.

This is not to say that they are the complete answer to the issue of domestic violence, but they are certainly one part of protecting women and keeping them safer. 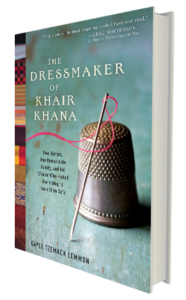 EYE: The book “The Dressmaker of Khair Khana” that you’re working on is about a female entrepreneur and how she created jobs during Taliban years. What inspired you to write about her and other women entrepreneurs?

GAYLE: The book tells the story of a young woman whose business created jobs and hope for 100 women in her neighborhood during the Taliban years. I was inspired to tell this story because we are very used to seeing women as victims of war who deserve our pity rather than survivors of war who demand our respect.

So few people outside Afghanistan know just how much work women did during the Taliban years; these women made the difference between survival and starvation for their families at a time when they weren’t even supposed to be on the street.

I was struck the first time I heard Kamela, my protagonist’s, story by just how brave and how intrepid these young women were, and I was determined to tell their story.

EYE: Are you ever in fear when you cover stories in this region, particularly as a woman?

GAYLE: I do not think that being a woman is an additional risk, but of course there is always concern when you are in an active conflict region. That said, in Afghanistan life goes on each day, despite all the challenges, the insecurity and the fragility of life.

EYE: How do you determine what stories you report on? What’s next?

GAYLE: What’s next is preparing for the book’s March launch! I look for good stories and stories I think matter. Right now I am working on two business features from Afghanistan for the New York Times Global Edition and a report on maternal health in Afghanistan for the Council on Foreign Relations.

EYE: How objective do you try to be?

GAYLE: I try to look at all stories from a remove, but I do believe in universal human rights. Some things are not relative, and some things, such as the brutality visited upon Bibi Aisha, are simply wrong. And I think people must see these stories because it is much easier to look away than to confront their very uncomfortable realities.

EYE: When did you know you wanted to be a journalist?

GAYLE: I knew I wanted to tell stories when I was 13. That is why I went to journalism school at the University of Missouri for my undergraduate work. I now am at the Council on Foreign Relations and get to tell stories in a very different way and reach different audiences, and I feel grateful for all the opportunities I have had to write stories and about issues which I believe matter.

EYE: How can people on the outside help these women in Afghanistan?

GAYLE: They can give to organizations that work on the ground. There are many doing very good work, including Afghanistan Center Kabul University, Women for Afghan Women, Voice of Afghan Women, Afghan Women’s Network and so many more.

EYE: Thanks, Gayle, for your inspirational reporting. We are looking forward to your continued coverage of these intrepid women.