LISTEN TO OUR LATEST PODCAST: Vanessa Ruiz on the Challenges Facing Journalists Today

Cynthia Aguilar’s valiant attempt to set a world paddleboarding record from Cuba to Key West in thirty-six hours came to abrupt end in September after paddling solo in the water for 17 hours. You can read about her preparation for the trip to raise money for the Make-A-Wish Foundation in this EYE interview.

When I heard that Cynthia didn’t make it all the way, I wanted to find out just what happened in the unpredictable Gulf Stream and how dangerous it was. She told me what made her reluctantly decide to get out of the water before reaching Key West and gave me some exclusive photos that you’ll see in her documentary coming out next year when she tries again. The woman is unstoppable! 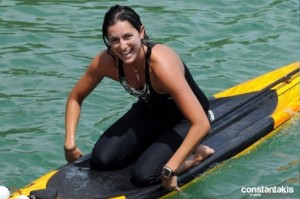 WOMEN’S EYE: You paddled successfully for 17 hours. What happened?

CYNTHIA: I stopped because I just couldn’t be selfish and lie to myself. Yes, the man o’ war were a problem. I got stung like I have never been before from my hands up to my elbow. But that was not what stopped me. I had a really bad reaction to that, but I just get going after it was over.

The eddies were my worst enemy out there. Every time I stopped for a five minute food break, I would lose up to one and a half to two miles. For over seven hours, I was in the same area. Trust me, I did not want to get out of the water.

Getting out was the hardest thing I had to do. But it was my choice after talking to my crew. They were willing to stay there until I couldn’t go any further. I just had to be realistic about what was happening and know when to say that’s it.

EYE: Were you injured?

CYNTHIA: I was not injured at all except for the really nasty stings on my arms. I have to say that when I got out of the water I was feeling so strong. What is hard for me is to know that I could have paddled further.

I had to take some time for myself and take it all in. I learned so much from it. I learned when to stop not by quitting but by knowing that I would continue at a better time.

We’re still filming the documentary all the time. It wouldn’t be truthful if we left out the hard parts of life. I want to show people the real me.

EYE: How will you train for the next time?

CYNTHIA: My training is going to stay the same, but I’ve found lots of new friends from all of this that will help me pick a better day for this crossing.

EYE: Will your next crossing attempt be for Make-A-Wish?

CYNTHIA: It will be 100% for Make-A- Wish until I touch land in Key West. I feel like I let them down and I’m going back with revenge for them. I’m looking at the Summer of 2011 to try this again.

EYE: What do you think happened out there in the gulf?

CYNTHIA: The ocean is even more unpredictable than I thought. I learned that I’m really human and could be stopped. Hopefully, this will show people and inspire them by seeing that I’m just like them. 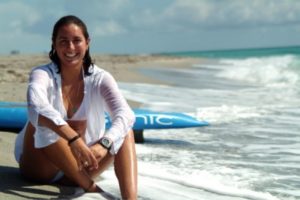 With your heart in the right place and with hope anything is possible. If you fall, rub that dust off and go for it even stronger than ever no matter what anyone thinks or tells you.

EYE: Cynthia just went back on her board recently for the first time since the Cuba-Key West attempt for a three mile paddle. You can follow her on keeppaddlin.org. Good luck with your paddlin, Cynthia!

Virginia Paca On Her Homegrown Foodbank To Feed The Needy
Next Post: Elizabeth Murray On Her Passion For Monet’s Garden And Sacred Spaces