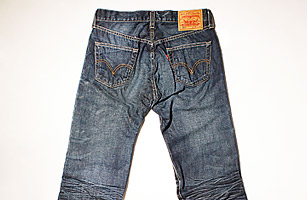 There’s a fascinating article in Time online by Bryan Walsh about the new “green” WaterLess jeans produced by Levi’s with less water that can be bought in stores this month. The company says they are using 28% less water in the finishing process to wash them, saving up to 16 million litres of water overall. They cost the same.

There’s also a terrific collection of photos in the story called “The World of Blue Jeans.” The photo above is by Alexander Ho for Time. Below you’ll see the Levi ad for these new jeans. It’ll give you an idea about the amount of water they claim we all will save with them.

If you’re interested in jeans in general, check out “The Master of Blue Jeans” exhibit opening in New York on January 20 at Didier Aaron, Inc. written about in the New York Times. It includes 17th century paintings of people dressed in denim made at the time in Genoa.

The word “jeans” by the way came from material in the pants of sailors from Genoa back in the 15oos. And Genoa in French was Genes.

And here’s even more jeans’ trivia. Blue jeans were invented in 1873 by Jacob Davis and Levi Strauss. They were first called waist overalls. Jeans certainly have come a long way in 500 years.