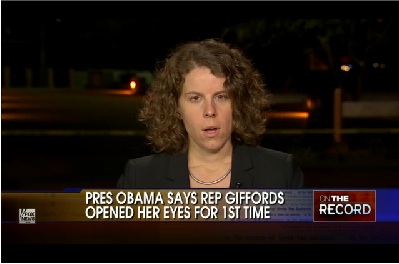 You won’t find many photos of Pia Carusone, only those of the woman she works for, but you may have seen her on television this week. She is Rep. Gabrielle Giffords’ Chief-of-Staff and has been valiantly handling constant inquires from the public and the press about the Congresswoman. Pia wasn’t in Arizona at the time of the horrendous shooting incident but arrived in Tucson soon after from Washington.

She’s been keeping the press updated on Gabby’s condition as you can see in these interviews with Brian Williams of NBC News on the capitaltonight.com website and on Greta VanSusteren’s On the Record pictured in the top photo.

This native of Saratoga Springs, New York got involved in politics after graduating from Bard College.

She began as an intern on Howard Dean’s presidential campaign and later worked on his staff. She moved on to Capitol Hill as press secretary for Rep. John Sarbanes of Maryland. 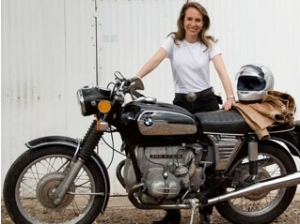 Pia gave insight into the Congresswoman in a brief article in Glamour which the magazine says is her first interview since the shooting. It’s called “4 Things You Don’t Know About Congresswoman Gabrielle Giffords” by Sarah Robbins. She talks about how Gabby at 40 is one of the youngest female Democrats in Congress. Pia is just 30.

She says they share all sorts of cultural things. She describes the Representative as a role model for interns and says people feel that they know Gabby even if they haven’t spent that much time with her. One of her passions is motorcycles as you can see above. Bicycling is a big stress reliever for her she adds.

I’m sure we’ll be hearing a lot more from Pia and getting to know her better in the days ahead as she holds the Representative’s office together. An interview in the Troy Record quotes Pia on her motivation for working with Giffords: “I just wanted to work for someone who I felt inspired by. She’s truly an amazing woman.”

We’re praying that Congresswoman Giffords continues her courageous recovery in Houston. From all reports, she is progressing amazingly well.

If you get the chance, please read this message from Pia posted February 8 on Rep. Giffords’ website. It’s a special message she sent to the Arizona Daily Star. She talks about how Gabby’s spirit is being reflected in the public offering of good that is happening these days.

Giffords’ staff continues to work tirelessly as they always did. She says it helped the staff to return quickly to work. She mentions that they recently assisted a Tucson woman who wanted to flee Cairo. Also, they made it possible for two veterans to get the service medals they never received.

As Pia says, “This is the work we do all the time.”

WATERLESS JEANS
Next Post: Tucson’s Tribute To Rep. Gabrielle Giffords And Victims Of The Tragedy