1/25/11–It’s amazing how fast the name Amy Chua shot into the universe! The minute the Wall Street Journal article surfaced with that incendiary headline “Why Chinese Mothers Are Superior,” the buzz began about her new book “Battle Hymn of the Tiger Mother.” The WSJ story touched a nerve so fragile that opinions were flying on everything from parenting to the U. S. educational system to the ramifications of playing the violin. 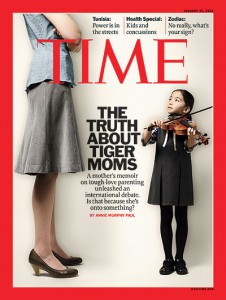 Recently, without even trying, I ran into the Time Magazine cover ‘The Truth About Tiger Moms” at the airport, an article in the San Francisco Chronicle on “Why Children Should Be Raised by Mothers Not Tigers,” word from a neighbor about the Chua piece on CBS’ Sunday Morning, and all this before noon. This week she surfaced on Good Morning America explaining her stance on rejecting a Mother’s Day card from her daughter.

Fortunately I had the opportunity to hear Amy speak last week in Berkeley at a sold out event sponsored by KPFA, a listener-sponsored community radio station there. She had the chance to clarify her controversial opinions at a q and a with host Aimee Allison. Here is some of what she had to say:

…The public response has been completely overwhelming. She knew the book would be provocative.

…It’s a memoir not a parenting book. Her dad said, “Who would want to read a book about you?”

…She didn’t write the Wall Street Journal headline and does not feel that Chinese parents are superior.

…The book is her own family’s journey. They had a real crisis. She makes fun of herself and retreats but not entirely.

…She usually spends years researching her books on foreign policy. She did zero research for this one.

…It was terrifying to know that an excerpt was going viral in Asia. She says that it’s just her life, that’s all.

…Raising her first daughter went very smoothly. She locked horns with the second, Lulu, who is 15.

…The violin became a symbol to Amy for respect for hierarchy. To her daughter, Lulu, it meant oppression. Amy finally told her “You win!”; she retreated from making her play. Why torture yourself and your child, she said. Lulu now plays tennis and some violin.

…Her parents gave her the greatest gift ever given her–unconditional love. She’s incredibly proud of her daughters.

…She’s had three offers for reality shows. She said no.

Amy is fascinating and admits she’s still trying to find balance. The book is definitely worth reading. As she insists, it’s not a how to but actually a love story to her daughters. She hopes people can learn from her mistakes.

Amy read from a chapter entitled “Red Square.” It’s about the mother-daughter confrontation that began the retreat. If you read this chapter, you will not soon forget it!

UPDATE–1/31/11– Amy’s husband Jed Rubenfeld appeared on Good Morning America to defend his wife’s book. He insists that they have raised their children with traditional American values and never thought they were Chinese. He says he’s on board 99% of the time with Amy’s child-raising methods. His new book “Death Instinct” is just coming out.