Funnywoman Tina Fey and Her “Bossypants” 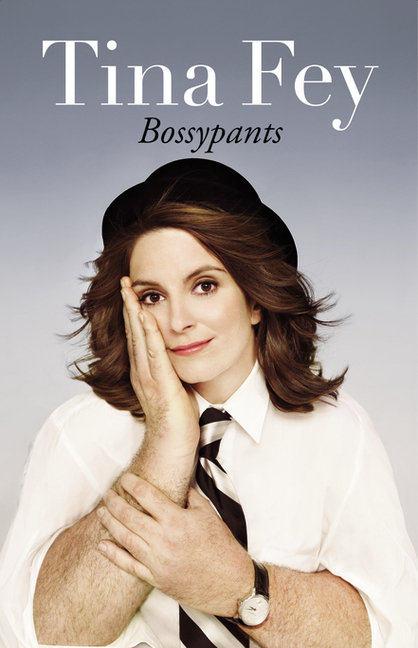 Tina Fey’s father told her, upon seeing the odd image on the cover of her new book “Bossypants”, “I hope that’s not really the cover. That’s going to hurt sales.”

Well, tell that to the over 5,000 enthusiastic fans who came to see his daughter speak and sign books this week at the Nokia Theater in Los Angeles. (I, of course, was one of them.)

In the role of interviewer, Martin immediately addressed the elephant in the room, or baby bump in this case, by stating, “The first thing I am going to do is something that Dave Barry, the great comedy writer, said never to do unless you have medical records from a doctor and a medical report from the hospital, and that is ask a woman if she is pregnant.”

Tina replied, “My doctor says this hysterical pregnancy is from my desperate need to sell a lot of books.” And with that, these two comedic giants were off and…laughing.

Yes, Tina will soon be a mother of two. But she has also given women in Hollywood someone to look up to: Emmy winning writer/producer of “30 Rock”; head writer of “Saturday Night Live”; screenwriter of “Mean Girls”, and “Baby Momma”; and of course, Youtube darling with her impression of Sarah Palin.

Martin who has his own book “An Object of Beauty“ on the best-seller list, covered all this with a Lettermanesque interview style. “I find it interesting how protective you are of the Sarah Palin character you were destroying…”

In her book and on stage, it’s easy to see that Tina Fey is never one to let criticism get her down. She takes it all in stride. In fact, it only seems to fuel her humor. When one male online critic said the “only reason she is celebrated is because she is a woman…”, Tina didn’t retreat and cry in a corner.

Instead, she responded in her book by writing a “fake” reply, hilariously recited on stage by Martin: “…we are a society that constantly celebrates no one but women and it must stop! I want to hear what the men of the world have been up to. What fun new guns have they invented…?” Take that! 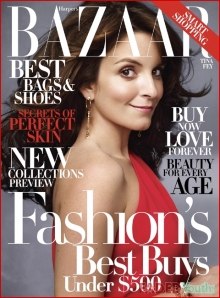 I could go on and on, but I did want to share some of her personal anecdotes on SNL, Sarah, and success.

…On Her Saturday Night Live Success:

Tina became head writer of SNL within three years. Martin asked her about “your gender issues in your life…” to which she replied “I did finally settle on one.” In regards to there being a boys-club mentality behind-the-scenes at SNL, Tina says it wasn’t difficult for her because she was there at a lucky time.

There was strength in numbers and the world had changed. “There were more women in media and politics to parody, which helped women to get on the show more equally. Did you notice though that from the beginning, women are often the stars on SNL. I find it’s when they leave SNL…the men go on to be successful movie stars… women less so.”

…On Looks in Hollywood:

When Martin asked her why she seems to take every opportunity to deny her talent with her self-deprecating wit, Tina explained that “it’s a very confusing line for women to have to walk. You have to look good enough so they let you stay in show business but then don’t get too carried away…I truly don’t really care…about being fancy.”

She talked about critics of her photos like the Vanity Fair cover where she was dressed like Wonder Woman, who said “She’s looking over confident,” or of her bookcover: “She’s not owning it.” She would like them to “take a Polaroid of how you’d like me to pose! There is just no pleasing everyone.”

After eight weeks of impersonating her, Tina first “met” Sarah Palin, as they crossed by each other in that now infamous SNL sketch. Martin asked, “I sensed some friction…was I wrong? Tina says it was just “staged” friction. But she wrote and discussed how she worried about the former Governor being booed by the liberal New York audience.

She thought it wise to have Palin first appear backstage next to Alec Baldwin, a known liberal. Then she came out to a hero’s welcome. Tina joked, “I underestimated what a big tv star she is”. Tina went on to generalize, as Martin pointed out jokingly, why she felt protective of Palin. “Men are rebellious, women are quiet, nice and obedient…” 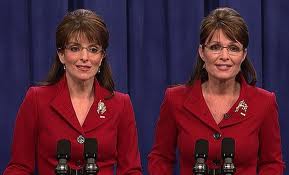 …On Her Humble Improv Beginnings:

Tina was in a touring improve group (SCTV) with Amy Poehler of “Parks and Recreation”. They would travel the country in a van with six other people to perform for $75 a show. She says this was an extremely important part of her life, as it helped her to take on that early writer role. And got her “a lot of nachos”.

…On Her Relationship with her Dad: 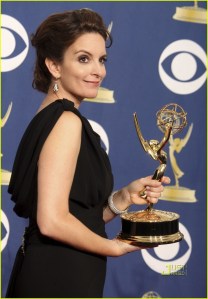 Martin joked that Tina “has an entire chapter devoted to her father but not to me”. She describes her relationship with her dad as a strong one. She called him a great American, a code-breaker in the Korean War.

“He is an impressive…naturally intimidating man. He had a countenance…that would terrify me. In Little League as a child, he would tell me to focus. I would say I am focusing. He would add ‘you just think you’re focusing’. It was exhausting for a nine-year-old kid! But it did help my work ethic, and it’s really paid off.”

…On One Person She Would Like to Work With:

She says comedic actress Catherine O’Hara. She may get her wish. Catherine was in the audience, seated right near the front of the stage.

…On Advice for Writers:

Tina says to just get your work “in front of an audience” as much as possible. And to always have a good work ethic. Don’t procrastinate!

I’ll admit…it was worth being the 1231st person in line to get my book signed by Tina! And I didn’t find her bossy at all!!!