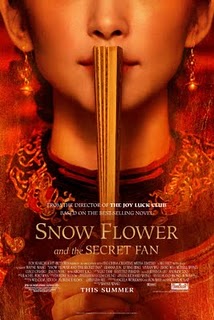 What brings about the tie that binds two women in a life-long friendship? This is the theme of Snow Flower and the Secret Fan, the international best-selling novel by Lisa See, recently made into a feature film by director Wayne Wang. He also directed the successful movie version of Amy Tan’s equally successful book, The Joy Luck Club.

I believe that each of us has one particular area in life that is especially blessed. For some, it is devoted parents. For others, it is an extremely supportive marriage, and for still others, it is material success or worldly accomplishment.

For me, it has always been, and continues to be, my friends. All of my life I have been blessed with female (and male) friends who have cared for me, taught me, protected me, and given me opportunities that I would have otherwise missed.

Some of these friends are close. Some are not. However when we see each other again, we just pick right up where we left off. Like anyone in this position, I am immensely grateful.

So when the film version of this epic story about the friendship between two women in 19th century China hit the screen last week in New York, I was there. So were hundreds of other women who waited in line to see the movie version of Lily and Snow Flower’s tale, which has resonated with readers around the world. The book has been translated into almost 40 languages.

Keep in mind that Snow Flower is no ordinary example of chick lit; its film version is not an Asian-style chick flick. Snow Flower and the Secret Fan tells the story of two laotongs which literally means “old sames.” The custom of laotong was not practiced throughout China, but was specific to a minority tribe in the Hunan province where the story of Lily and Snow Flower, played by Gianna Jun and Li Bingbing, takes place.

In the laotong tradition two girls would be matched at a young age as laotongs if they were destined to be together. In Snow Flower the young girls are paired by the venerated matchmaker who decides to make them “sisters” because they were born on the same day, Lily to a poor family and Snow Flower to a rich one.

As laotongs, they pledged to be loyal friends forever, and this bond was formalized in a contract that could never be broken.

As both See’s novel and the film version show, women’s lives in China were difficult and emotionally brutal in those early times. Women were the property of their husbands and his family. From an early age they were taught obedience as their highest quality. They defied neither their husband, his mother, nor their own parents. They did what they were told.

Their marriages were business arrangements made by their families with a matchmaker who tried to get the “best deal.” A women’s worth on the marriage market was derived from her family’s wealth and social status and by her feet. If a girl, even a girl from a poor family, had small, perfectly shaped feet then she had a chance to make a respectable match and “marry up.”

This instituted the painful custom of foot binding in which a girl of around six years old had the bones in her feet broken. The feet were then wrapped tightly. They were continually unbound and checked, but the broken bones were always folded over again and rebound.

Many female children died from infection as a result. By adulthood, the feet were supposed to be no larger than a child’s. These small delicate feet were called “The Golden Lotus,” and for Chinese men they were a major turn-on. And who customarily broke the bones and bound the feet of a Chinese girl? A woman.

Frequently, a professional foot binder was secured because the mother was often too emotionally weak to perform the excruciating process on her own daughter.

Lily’s mother in the book is a skillful foot binder, unmoved by her daughter’s cries and rigorously disciplined in this custom. It is her skill which helps her daughter attain her fortune.

In the movie, when the small child Lily cries out to her mother and begs her to stop, her mother replies, “In pain there is beauty. In suffering, there is peace of mind.” This is a poignant belief which may have comforted her generation of Chinese women throughout their hard lives.

If foxholes make men into devoted friends, then it is men who do the same for women. The laotongs stuck together. They devised their own secret language called nu shu, which no one else could understand. It enabled them to send private messages back and forth written on a fan.

Sometimes Lily and Snow Flower unobtrusively pass the fan to each other when they meet. Sometimes they send it by messenger. Their husbands are completely left out because men are unable to understand what was written in nu shu. A lifetime of messages could be sent on fans.

Like any long, intimate relationship, the one between Lily and Snow Flower has its complications, and inevitably conflict occurs when the two friends are thrust by fate into different kinds of lives. When the two have a falling out, they chillingly inflict their anger on each other with silent, yet deep, cuts to the bone, something only close friends know how to do.

In the film version, director Wayne Wang juxtaposes the tale of Lily and Snow Flower with a story of two modern Chinese women, Nina and Sophia, who struggle to maintain their own close friendship while meeting the demands of complex lives in today’s Shanghai.

While Wang most likely intended to broaden the appeal of See’s original version, he loses its soul by offering us this contemporary story that was not part of the original book. This is sad because much of the rich detail in See’s historical saga is missing in his confusing rendition. If only Wang had the courage of the fictitious Lily and Snow Flower and dared to make this a full historical drama by staying faithful to See’s novel.

No doubt he felt it to be too old-fashioned to do so. However, the gifted performances of the young actresses Gianna Jun and Ni Bingbing playing dual roles somehow rescue the movie.

Their faces are luminous in their expressions. They manage to convey the agony and tenderness at the center of Lily’s and Snow Flower’s relationship and the intensity and playfulness at the core of Sophia’s and Nina’s.

I would not tell anyone to ignore the movie version of Snow Flower. It is gorgeous to behold (although I do not know anyone who sees a film for the sake of the art direction). If you truly would like to get the most from this story, make sure to read the book as well.

Women’s loyalty to one another is seldom openly discussed. I have seen all types of surveys on women’s fidelity in marriage. I have read all sorts of studies about women undermining each other in the workplace and the failure of the female gender to bond or to create an “old girls’ network.”

However, there is far less attention, scholarly or otherwise, given to the subject of women and friendship. I believe the popularity of See’s original Snow Flower illustrates an underlying truth in the lives of women. Loyalty toward other women in close friendships is as essential to most women as are all the other aspects of their lives.

The bottom line on Snow Flower and the Secret Fan is to read the novel if you have not already. See the movie if you want a little more. But in either case or neither case, remember to call your best friend.

Do you have a story about a life-long friendship? Is so, would you like to share it? Please send your friendship story by email to spodbielski@aol.com. All names will be held confidential.

Sue Podbielski is a writer, producer, and community activist.