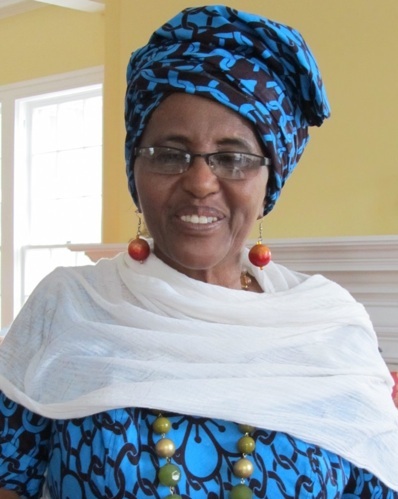 When Dr. Hawa Abdi walks into a room, she radiates an aura of dignity, stability, and joy. Yet she runs a huge community and self-made clinic with a threatening militia only 21 kilometers away from her home-base. That medical center, farm and school tends to 100,000 displaced people near Mogadishu, Somalia. It’s in an area called “The Horn of Africa” and in a country with virtually no government.

“The drought is catastrophic causing the worst water shortage in fifty years.”

At 64, the good doctor has nurtured her patients and 1300 acre plot of land for 27 years. Her unique compound began as a one-room hospital in 1983. Recently she left it to travel to the U.S. to talk about the current chaos and drastic conditions in her homeland.

Having read about this extraordinary woman’s accomplishments, including being chosen one of Newsweek’s “100 Women that Shake the World,” I couldn’t wait to hear her speak and be interviewed at the Chautauqua Institution last week. This special place is a wonderful educational summer camp that some call a “retreat” near Buffalo, New York. I hoped to glean an understanding of the horror she was up against at home and how she was handling it.

The drought in Somalia is catastrophic and causing the worst water shortage in fifty years. Dr. Hawa has established a foundation to support her efforts to save lives and educate children in the midst of the tumult.

How does one person with only four other doctors service 400 beds and 300 outpatients daily in a place where there is little food and water? When you meet Dr. Hawa, whose workday begins each morning at 5AM with patient rounds, you begin to see the secret to her success. Often compared to Mother Theresa and Rambo, she radiates confidence and a tremendous concern for humanity.

“I have no weapons. I respect life, and I believe I will win one day,” she says passionately. “The world is one. Something good will happen to make Somalia a better place.”

At her side in the clinic are her two daughters, Dr. Amina Mohamed and Dr. Deqo Mohamed, both trained in medicine as she was in the Ukraine. They know that she is the president and the diplomat of the operation.

“You need a person like my mother who is determined and thinks they will win if she leaves the country. Rambo fits the description. She knows how to fight,” says Deqo, who is traveling and speaking with her.

The battle she faces is tremendous. Her country is rife with Muslim extremism. She was a living witness to the volatility when hundreds of militants attacked her camp on May 5, 2010, taking her hostage. They finally released her after holding her for a week under house arrest. The pediatric unit was destroyed.

“For twenty years there was civil war. The inter-clan fighting has always been very bad . Our hope is that the people know that we’re here for them. We pray that the women will shoulder this crisis and win like they did in Liberia,” Dr. Hawa insists.

“People are dying to find food, especially children at the rate of seven a day.”

Can her clinic continue to feed and school the people under such difficult conditions? Doctors Without Borders suspended their international presence three years ago when three of their staff were killed. A few humanitarian organizations have been allowed access to some areas although hampered by the militants. People are dying to find food, especially children at the rate of seven a day. In the last 90 days, 29,000 Somali children under 5 have died.

“We have 100,000 people living peacefully on our property. Our land, water, and health care is free. We can feed 6,000 people, but we can’t feed everyone. We try to stay away from the people who are vying to rule and don’t want their help,” says Deqo.

Dr. Hawa and her daughters believe part of the answer is in the empowerment of women, teaching them and the rest of the community to be self-sufficient.

“We want to develop education, jobs, and energy alternatives. Our river is dry, but we have the huge Indian Ocean as a border that has tremendous potential for a fishing industry,” says Dr. Abdi.

She’s laid down two non-negotiable rules at the camp: no clan fighting and no wife-beating. Making those commitments, parents have been able to have 860 of their children educated. But there are 20,000 left. There are 26 teachers, but that is hardly enough. Security is nil; there are no fences around the 400 acre farm.

How realistic is success for this extraordinary doctor and her daughters? She has great faith that there will be a better world for Somalis.

“We must be recognized as one nation with one government. I have given my heart and soul to my people. Our children in the camp now have opportunity. We Africans carry our family in our hands. I will not leave my people. I will die with them. One day there will be peace,” she insists.

I finally got to wish Dr. Hawa well after her final talk at the Institute. She gave me a warm hug and told me how I could help. “Pray for me,” she said. “Pray for us. We have to believe.”

Vital Voices helps with support for Dr. Abdi’s cause.

Carie Lemack On The 10th Anniversary Of 9/11 And Ending Terrorism
Next Post: Diane Meier On The Season Of Second Chances