CNN’s Sara Sidner Reports Fearlessly From the Frontline in Libya 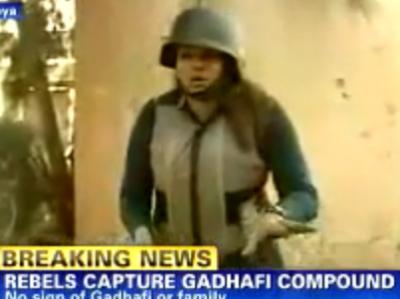 If you’ve been following CNN’s coverage of the volatile situation in Libya, you can’t help but notice Sara Sidner. This reporter is always where the action is whether it’s at Qaddafi’s compound or on the trail of the rebels as they take control of Tripoli.

That correspondent is Sara Sidner whose brave reporting is “turning heads” according to the Huffington Post. That website describes her as the new breakout reporting star. Businessinsider.com calls her “incredible and brave” and her coverage “absolutely riveting.”

Following her on twitter @sarasidnerCNN gives you her latest mini observations from the battlefield. This is her most recent terrifying tweet: “We have to run from Qaddafi compound. Gun fire coming towards us from inside the compound.”

She’s not a familiar face to those who keep tabs of rising news’ stars. Even her own colleagues within CNN wonder who she is. Jack Cafferty, their opinionator, said today that she’s putting herself at great personal risk.

In fact, he remarked that people don’t know anything about her including himself, but that she’s doing an incredible job on the frontline.

Today she announced live that she was getting hit by shells being fired from behind her at the Qaddafi compound as the rebels were capturing and holding it. Dodging bullets as she reported, she crouched on the ground, continuing to follow the action in spite of the flying shrapnel.

And who exactly is this new reporting face that is front and center as this war continues its “now it’s over, now it’s not quite” unpredictable flow? She’s CNN’s multiple award-winning, New Delhi-based international correspondent whose main job is covering India and South Asia.

You might have seen her in the video above covering the Mumbai terrorist attacks from outside the Taj Mahal Palace in 2009. There she’s being confronted by an angry mob in front of the hotel.

CNN’s website details her more than 15 years of experience in television journalism covering national and international stories including the aftermath of the Sri Lanka Tsunami in 2004, earthquakes in Chile and Haiti, and the massive flooding in Pakistan and North East India.

This intrepid reporter was a weekend anchor for KTVU-TV in Oakland, CA before joining the cable network. Here you can see the station’s fond farewell to their very popular reporter.

She’s still broadcasting from Tripoli on CNN at 3AM this morning as what she calls “celebratory gunfire” is blasting all around her. Stay safe, Sara.