There’s nothing quite like sharing a relaxing spa day with Jane Fonda, Tatum O’Neal, and thousands of other women. I’m totally serious. I recently attended the Ultimate Women’s Expo at the Los Angeles Convention Center, a two-day extravaganza filled with massages, makeovers, shopping, cooking demos, hair styling, celebrity authors and psychic readings…everything under the sun to make even the most stressed out woman take a deep breath.

It was the second stop on a four-city tour — Phoenix is on tap next — and has become one of the nation’s largest women’s expos to combine shopping, speakers and services for an ultimate estrogen experience, all under one roof.

Of course, the big draw was a dizzying list of keynote speakers, which read like a TV rerun of my teenage years:

These Hollywood icons – and now best-selling authors – share one thing in common: the wisdom they’ve earned from lives filled with ups, downs, good times and bad, big wins as well as devastating losses. They sold books full of life lessons like it was candy, and I took a handful.

“I hope the words in my book are both helpful and healing,” said Broadway actress, Wesson spokeswoman and, of course, everyone’s favorite Brady, Florence Henderson. She had us all at “Here’s the story…”

She gave a rousing speech on finding the courage to fulfill one’s dreams. She’s glad fans are discovering there is more to her than just Carol Brady, but admits retracing a childhood of poverty and abandonment in her new candid memoir “Life is Not a Stage” wasn’t easy.

“When you’re living it, you don’t really stop and think about what you’re in. The toughest part for me in writing the book was to go back and look at some things that weren’t pretty,” she admitted.

Barbara Eden says writing “Jeannie Out of the Bottle” ten years after her son’s drug overdose was anything but cathartic.

She said, “I’m happy I did it, but it’s tough to live your life again. I hope whatever I have put in my book is helpful in some way to someone somewhere. I just wish that I had known about things as much as when I was living those things.”

With wisdom, of course, comes age. The consensus at this convention was these stars-with-memoirs have all aged gracefully. And they wouldn’t give up anything now to be younger. 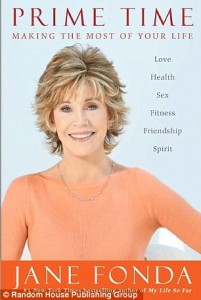 “I lost my eyesight, but I’ve gained insight,” said Jane Fonda, who at age 74 claims she’s happier than she’s ever been. Her new book “Prime Time” addresses life after 50, and covers everything from “physics to penile implants.” She recommends that everyone write a “life review” to discover who they really are.

“Real love and intimacy happens when you’re standing on your own two feet. You can’t have intimacy if you don’t love yourself. Look, I came to LA to get a new knee and got a new lover,” she proclaimed.

“Writing your life” was a recurrent theme. At 69, Linda Evans admits her decision to finally pen “Recipes for Life”, her cookbook full of memories, was an incredible adventure. “It took me so much longer than I thought but it taught me so much. I got so many gifts from this book. I want to tell everyone to look back at their life because you can see with new eyes how it led you to where you are now.”

They came to inspire, but many of the speakers took time to enjoy the expo too. Meredith Baxter said, “I think it’s always great when they reach out to women. Women are the moving forces, the biggest shoppers, they are going to move commerce along.”

Attorney-turned-novelist Marcia Clark did some retail therapy of her own after signing her book “Guilt By Association” for fans, as did Stefanie Powers.

The “One From the Hart” author also had a booth at the Expo to benefit her William Holden Wildlife Foundation. Her message was simple: nourish yourself inside as well as on the outside.

“It all starts from within. We have to empower ourselves on a daily basis even if we never leave the house. I think of it as looking upon ourselves as being as perfect as we possibly can see ourselves to be. It’s only inhibited by our inability to see just how good we can be. Hey, I didn’t say it was easy.”

No one knows that better than Tatum O’Neal, who has written her second memoir “Found, A Daughter’s Journey Home.” She said she was honored to be a part of an event like this and as the final keynote speaker, she spoke openly about sobriety, forgiveness, and above all else, trusting women.