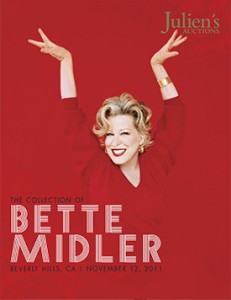 The Rose. Delores De Lago. Queen of Trash. Showgirl. Bathhouse Betty. The Divine Miss M. So many characters, but only one Bette Midler. Over her 40-year career, Bette has created some of the most colorful, iconic, and certainly memorable personas of any performer, and now she is parting with her personal collection in a rare sale at Julien’s Auctions in Beverly Hills on November 12th.

A few years ago, I got to see her in Las Vegas in “The Showgirl Must Go On.” The costumes were so incredible that I just had to see them up close one more time. It was a thrill to get to see them recently at the preview.

Up for auction will be her outrageous Bob Mackie-designed costumes, designer gowns from Valentino to Pucci, headdresses, gold records, her first audition dress, her Las Vegas boogie-woogie bugle boy costumes, and even her Cable Ace Awards.

“It’s because of their historical significance mixed with fans, investors and collectors all competing against each other to obtain a piece of pop culture history. Collecting and investing in pop culture memorabilia is much more fun than buying a Monet or Picasso, and the values just continue to rise.”

For Bette, selling her personal items has been heartbreaking and hilarious, but “the time has come for me to pass along these personal treasures, and I do it for so many reasons, but mainly to support the greening group I founded 16 years ago, the New York Restoration Project…and finish the work I started.”

The NYRP is a non-profit that cleans up parks, gardens and open spaces where Bette calls home: New York City. She says, “Who loves me, loves the planet too!”

So now fans and collectors alike can own her “Bathhouse Betty” Bob De Mora-designed gown from her 1998 album or the Valentino she wore to the Oscars in 1992 as a nominee in “For the Boys.” There’s even her infamous “mermaid-in-a-wheelchair” get-up that recently caused a stir when Bette said Lady Gaga stole the same look for her recent tour. Her magenta mermaid costume alone could hook you for $1500. Bette says to Gaga, “Here’s your chance!”

Julien, an entertainment memorabilia expert, has held previous auctions for Cher, Barbra Streisand and the Osbourne’s. He says he’s been pursuing Bette for over five years now because her career “is unlike any other celebrity. She is a class act and many of her costumes are way over the top. They are works of art themselves.”

Response to Bette’s personal property he says has been overwhelming, which should ease Bette’s mind. “She was nervous about doing a personal auction. Like most celebrities, she worries about what the response will be. She has nothing to worry about because she has a solid fan base who will be participating – not to mention major museums.”

One of Bette’s prized possessions is these blinged-out platform shoes given to her by Cher in the early 1970’s. According to Bette, “they were sensational, but a bit hard to walk in without falling down, so I put them on display in my house. Visitors were mesmerized.”

Darren says those platform shoes will be the hardest for her to part with. “She has great memories with these colorful shoes and pulled them from the auction twice, but has now given them back to us.”

It’s not surprising to hear that parting is such sweet sorrow, especially with a career spanning 40 years.

Julien says Bette cried when she saw the catalog. “Prior to printing, she pulled some items, realizing that they are too sentimental to her. She saved these items for the memories never thinking that they would someday have value.”

One of those items is the dress that she wore to the red carpet for the opening of “The Rose.” Bette told the Associated Press: “That was the dress that made me cry because it was such a wonderful time in my life and I was surrounded by friends, and I was so thin.”

Costumes inspired by her most popular characters like Delores De Lago, including her ever-present ukulele, could fetch the most. But lesser known items, like the dress she wore at her first audition, are valuable just for historical reasons.

“I can imagine the drive and desire to succeed Bette must have had when she wore it, not to mention the nervousness in wondering if she would make it”, says Julien.

There’s no doubt this Diva made it. So whether you’re a fan, collector, or you just want to see history “from a distance”, the Exhibition of The Collection of Bette Midler is free and open to the public, Monday-Saturday from now through November 11th. So Divine.

A Valentino for the Oscars®: