I have been a fan of actress Jane Lynch since 1991. That’s when I saw “The Real Live Brady Brunch Show,” where she killed as Carol Brady. And I, like many, thought she stole the show in “Best in Show.” When I interviewed her in 2002 on the set of her short-lived ABC series “MD’s,” I told her how awesome I thought she was and asked her why she still wasn’t an overnight success? 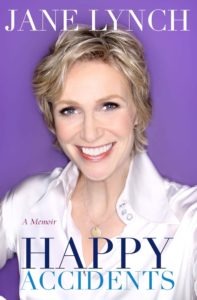 Well, perseverance and hard work has paid off. This past year will probably go down as Jane’s best year ever…so far. She has achieved big-star status as Sue Sylvester on “Glee”; she hosted the Emmy Awards a year after winning an Emmy and a Golden Globe. She married her partner Dr. Lara Embry, and she released her best-selling memoir “Happy Accidents.”

So I was excited to cover a recent LiveTalks LA Q&A at Club Nokia in Los Angeles. The event, “An Evening with Jane Lynch in conversation with Adam Scott,” her former “Party Down” TV co-star, supported the non-profit firstbook.org, and highlighted Jane’s humorous, and often times dramatic, journey to super stardom, all detailed in her new book.

Here are some highlights from the live event: 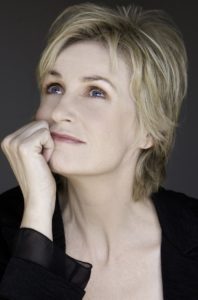 *She keeps a “scrapbook of mediocrity”: report cards with C’s and D’s; a 5th place ribbon in a swim competition; a “ding” letter from Universal Studios; and a citizenship award for kids who don’t get awards.

*She admits that in her teens and 20’s, she was unpleasant to be around. “I couldn’t stop myself. I had so many secrets. I was born with angst. I was uncomfortable in my own body. I didn’t have the tools to navigate my own life. I realize now that where I am is the best place to be.”

*While doing “The Real Live Brady Bunch Show” on the road, she says she felt bad about drinking so much. “…the debilitating hangovers that would knock me out for days. It really bothered me.” So one day she decided to stop drinking while pouring her last drink down the sink. She went to AA and that’s where she met a therapist who helped her embrace her sexuality. 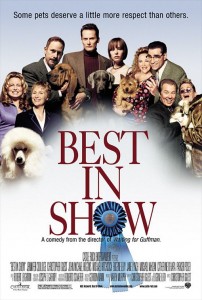 *She was 32-years-old when she “came out.” “I was fearful of my family finding out. There was a huge part of my life that they didn’t know about.” The therapist asked her to write a letter to her family that she didn’t have to send: “…an exercise to open your heart…fear comes out on the paper.” She did eventually mail the letter.

*Christopher Guest cast Jane in a commercial. Three months later she had another happy accident, bumping into him at a restaurant that she rarely visited. He remembered her and invited her to audition for a movie. That led to her hysterical role in “Best in Show.”

*One of her first movie roles was a scene with Harrison Ford in “The Fugitive.” He told her to “close your mouth. I don’t care how smart you are. When you’re mouth is open, you look stupid.” She says it was great advice.

*She was once a host for “America’s Shopping Place,” which was like a Home Shopping Network. She said it was valuable improv experience. She admits that they “kept trying to replace me with people who would have to audition with me.” But she really enjoyed riffing on electric flea collars.

*Her masssive “Glee” success in one way was a long gradual climb, but on the other hand, fame came almost overnight. “I was 49; I had some equanimity in my life. Had that kind of fame come to me at 40, my sense of self would have been wrapped up with public opinion…now I know who I am at the end of the day.”

*She spoke about being on the Board of a brand new non-profit, Adopt-the-Arts Foundation, with Abby Berman, an L.A.-based interior designer and mother of two, and former Guns N’ Roses drummer Matt Sorum.

“We started this organization to raise money for arts in the public schools around Los Angeles because we are bankrupt in California, and the first thing that gets cut is the arts. So we are raising money for those schools that can’t raise it for themselves. My daughter’s school has a terrific fundraising arm. Arts are a civilizing force and our kids need them.”

Adopt-the-Arts Foundation is planning an event in early 2012. Matt’s band, “Camp Freddy,” will perform. Jane will host and they hope to raise $100,000.

For a clip from the LiveTalks LA event, click here.