Anita Hill On Her Legacy and Reimagining Equality

It’s not difficult to understand why many are drawing comparisons between Republican presidential candidate Herman Cain’s ongoing sexual harassment scandal, and Anita Hill’s similar accusations against Clarence Thomas in 1991. Recently, he all but secured his place in the sexual harassment debate by admitting on Fox News’ Neil Cavuto show that he got a good laugh when a supporter asked if he thought Anita Hill would endorse his candidacy. 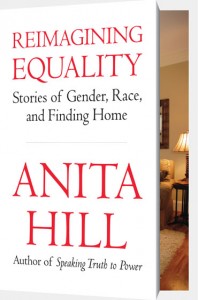 So here we are, twenty years later, once again consumed with accusations and denial. The timing couldn’t be more synchronous. Anita Hill has a new book, “Reimagining Equality: Stories of Gender, Race and Finding Home,” and is traveling the country addressing the issue of the housing crisis, its effect on families, and the threat to the American Dream.

But inevitably, the discussion turns back to that historical moment when she courageously testified against Clarence Thomas.

I can’t believe its been twenty years since I glued myself to the TV, and my futon, to watch the Senate confirmation hearings unfold. I’ll never forget how unprepared this nation was for a conversation about women’s equality in the workplace and beyond. So my eagerness to see Anita Hill in person was palpable.

The law professor spoke at a recent Library Foundation of Los Angeles/ALOUD book signing event where she was interviewed (at the L.A. Public Library) in front of a “sold out” crowd by L.A. Times columnist and award-winning radio host Patt Morrison.

“It is odd to be me. I think people thought that when I walked out here that I’d be wearing that same turquoise suit. Oh yes, I kept it.” Hill’s message on this night and the subject of her book, was about an “enduring symbol of economic success and equality — the home,” but her iconic status wasn’t lost on her. 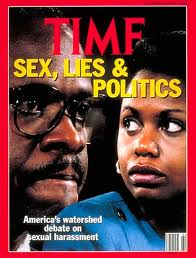 “I’m so fortunate that I was able to go on and grow in my career and make that event meaningful in my own life. It wasn’t something that I would wish for, but since it did occur, it was up to me to figure out what to do with it. And that was about taking authority over your own life, and not letting it be controlled by those who don’t have your best interest.”

Hill now lectures frequently on gender equality; she teaches law and race at Brandeis University and writes about breaking down the barriers of race to create a “community of equals.”

In her book, she tackles the subprime mortgage crisis and subsequent collapse head-on. “We have to come together as a collective and to review the whole host of policies that are putting us in jeopardy of repeating what has happened over the last few years. What I try to do is a call for action, and to have ideas about all of the issues that we need to confirm and address to keep that from happening again and to keep from visiting the effects of this catastrophe on generations to come.”

Morrison has interviewed everyone from Salman Rushdie to Henry Kissinger, but she had never met Hill before the ALOUD event. “For me to talk to the woman who was such a tremendous influence on my life and others and who made it possible to talk frankly about these equality issues that were considered shameful, was really inspiring.

She was this human shield and, of course, has paid a big price for that. But you see how strongly she has come out on the other side.”

Hill talked about how she received 25 thousand letters, cards and messages. And at the time, “I had telegrams too…” Not all were supportive. She faced bomb threats. But she admits she had a great support system, and there was enough positive feedback “that I knew something was happening. It was an issue we needed to confirm in order to have equality.”

She realized how the issue still resonated 19 years later when she got that infamous voice mail from Virginia Thomas in 2010 asking her for an apology. Morrison asked Hill if she “promptly deleted it” to which she replied: “Oh no; I saved that message.”

The reaction to that call was so fervent that Hill said, “Let’s take it and reclaim it. Let’s not have Ginny Thomas have the last word. Let’s not leave this where it is. Let’s figure out what it means and think about moving forward with that energy.”

Now there is a whole Anita Hill movement, with annual parties celebrating her historical moment. At the conclusion of the event, I was able to ask Professor Hill some final questions about speaking out, then and now, and her legacy.

“The legacy of 1991 is that women are empowered; they found their voices.” Anita Hill

EYE: How do feel about tonight’s event and the positive response you received?

ANITA: One of the things I love is connecting with people. It brings a lot of joy and pleasure. People talk about the hearings as being a tragedy in our history, but I also see it as a triumph for women to be able to come forward and feel empowered on a whole lot of different levels. That gives me a lot of pride.

EYE: It surprises me when you hear someone say “Who is Anita Hill?”

ANITA: Well, we have to consider that we’re 20 years later, and there is an entirely new generation of young women going into the workforce, and they don’t know what preceded them. But on the other hand, other recent events and with all this media and technology, they have this basis for knowledge, and they’ll soon know.

I don’t care so much that they know who I am, so much as they know now what rights they have, and that if they face sexual harassment, they can do something about it.

ANITA: In many ways we are in a very good place, but that doesn’t mean we’re done. The culture in many ways in the workplace is still not friendly to women; we still don’t have a sense of being valued; we still only make 80 cents on the dollar that men make; and the kind of work and contributions we make are important.

All of those things have to be addressed before we’re going to reach full equality. But I think we now have a voice and are putting ourselves in positions to be heard. The legacy of 1991 is that women are empowered; they found their voices. They developed advocacy for themselves, but also for young women.

“This represents so many parts of my of my life coming together.”

EYE: How do you feel about writing this book?

ANITA: I feel great. This represents so many parts of my life coming together, and so a big part of me is this book. I’m glad to be able to bring it to people, and I hope it starts to bring about some change.

EYE: If you saw Clarence Thomas today, what would you say to him, and would you ever have drinks? Ha!

ANITA: Boy, I must be in California. Hahaha. No, I have no intention of having drinks with Clarence Thomas. I don’t see any reason for it and no desire, and that’s not going to happen.

EYE: All joking aside, what is your secret to looking so good?

EYE: Thank you to Anita Hill and to all she does to encourage equality for all levels of society and to the talented group behind the Library Foundation of LA/ALOUD event!!