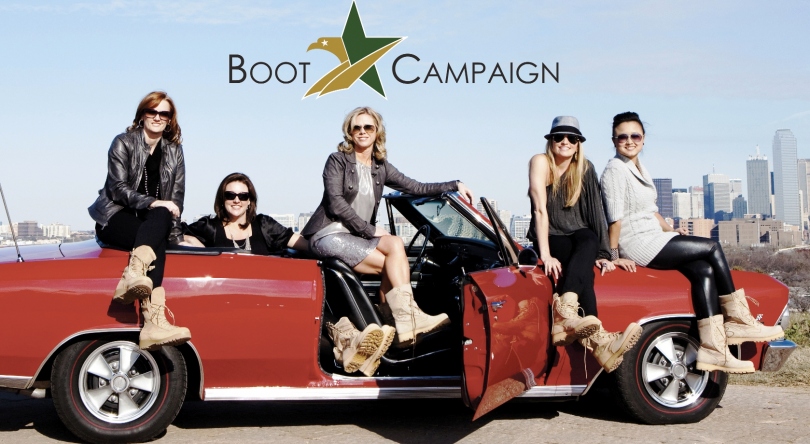 Several months ago, a friend invited me to attend the Boot Ride in Los Angeles, a charity event to benefit the Call of Duty Endowment Fund. As hundreds of bikers rode down Sunset Blvd., I noticed several people in the crowd all wearing the same military boots. What I thought was a strange coincidence was actually the work of the Boot Girls.

“Our goal is to have a pair of boots on an American civilian for every active duty soldier oversees.” The Boot Girls

The Boot Girls you ask? Well, they are actually five Texas-based mothers, wives, and career-minded women who just decided one day in 2009 to find a great way to support the men and women in the military serving our country. That’s when the grassroots “boot campaign” was born.

Thanks to Ginger Giles, Sherri Reuland, Leigh Ann Ranslem, Heather Fordham, and Mariae Bui, the boot campaign raises money, awareness, and appreciation for our troops when they come back from war.

The Boot Girls motto: “When They Come Back, We Give Back!” After meeting several of the Boot Girls in L.A. that day, I wanted everyone to learn how to “get their boots on,” so I spoke with Ginger in Dallas, and Leigh Ann in Houston, on The Women’s Eye Radio Show about their selfless cause, our troops, and what it’s like to walk in their shoes…or boots…

GINGER: It started as five Texas women who got inspired and who wanted to find a tangible way for all Americans to support our troops. We tried to figure out what can we do to tell these men and women everyday who sacrifice for us that we are grateful and so here come the boots. We think it’s a perfect symbolic gesture to wear these boots and say thank you.

“One thing that we are most proud of is that this is not a partisan-divided gesture.“

EYE: Had any of you done something like this before?

LEIGH ANN: No, in fact, at the beginning we didn’t really have this grand plan. It’s grown legs so to speak and snowballed into something that has really spoken to a lot of different people from all different avenues of life. One thing we are most proud of is that this is not a partisan-divided gesture. It’s anybody, no matter their thoughts about the government, its role, and the war. It’s just showing support for those who are oversees fighting for our freedom.

EYE: Does this hit close to home for you, Ginger?

GINGER: Yes, my grandfather served in the Air Force and was a World War II veteran, and my father did four years. I was actually born in a military hospital. I wouldn’t say I grew up a military brat, maybe just a brat…

EYE: I’ll have to ask the other Boot Girls about that! Ha!

GINGER: They’ve been sworn to secrecy! Ha. Once I started thinking about everything I take for granted in my everyday life — the things the troops don’t get to do, celebrating the holidays, etc.

It’s become a passion project for me. We’ve spent a lot of time trying to find ways to make sure these men and women get what they deserve and to help them when they come home.

EYE: This idea came from a book that all of you read…

LEIGH ANN: Yes, Sherri recommended the book Lone Survivor: The Eyewitness Account of Operation Redwing and the Lost Heroes of SEAL Team 10 by Marcus Luttrell. Luttrell wrote how he became a Navy SEAL and about the ambush in Afghanistan in 2005 that killed 20 men and left him as the lone survivor. He came out alive. His story inspired us to get involved.

We began by helping to promote a benefit concert that had already been planned. Our idea was to get country singers into combat boots and out of their cowboy boots — we talked them into it! The following week, we heard from Governor Rick Perry. He liked the idea of how we were showing our gratitude and he wanted to help.

This told us we were on to something. So we started getting recommendations from friends and family about who else would like to support us. It just grew from there.

EYE: You’ve now had the chance to meet and work with Marcus Luttrell. What was his reaction to what you started?

GINGER: As a retired military SEAL, he has had access to all of these different organizations who do such a good job of helping out our troops. He said, “This is the easiest, simplest way I have ever heard of to show support of the troops: put your boots on, and take a photo. How simple is that?”

This is an easy way for EVERYBODY to show their support. Who doesn’t like that? I think any gesture of gratitude that we as Americans show them, they are so appreciative … from the smallest gesture to the grandest one.

EYE: Yes, it’s literally as easy as going on your website, ordering a pair of boots, wearing the boots, taking a picture and then posting it…

LEIGH ANN: It’s a total grassroots effort… and we use Facebook and Twitter. We have several options and styles, and you can join the program.

EYE: Speaking of time commitment, Sherri was quoted as saying this was not to create jobs for yourselves. You all have careers. Ginger, you are the Director of Operations for the Boot Campaign, but that’s not what you do for a living…

GINGER: I’m in pharmaceutical sales for a living. We all have busy lives, kids and careers, and we get asked how and why do we do it? With anything in life, if it means something to you, you find a way to do it. Being overseas and fighting for freedom, it’s not glamorous, but they do it because it’s a calling in their heart.

“As long as our troops are over there and fighting the good fight, we’re here to do the same.”

LEIGH ANN: Heather and I are party planners. We started small, and we had the skills. When the boot campaign was born, and we were trying to figure out our roles, it became obvious that we had to plan events to raise awareness, so it was a natural fit for Heather and me. We join in other events as well as create events from inception.

EYE: This is not a money-making venture for you. Where does the money raised go?

GINGER: This is a labor of love for all of us. We do partner with some wonderful charities and proceeds go directly to partner charities like the Lone Survivor Foundation, Not Alone, and Military Warriors Support Foundation.

EYE: How much have you raised?

EYE: And I was wondering if you’re allowed to bling out your boots?

BOTH: Yes!! The more bling, the better!!

“When someone takes ownership of our idea and makes it their own, that’s what touches me…”

EYE: What kind of reaction have you seen from average Americans?

LEIGH ANN: One woman bought boots for her whole staff, her grandchildren, relatives, etc. When someone takes ownership of our idea and makes it their own, that’s what touches me, that and the direct thanks from military families that we get. We hear messages all the time thanking us and saying, “What you are doing means a lot to us.”

EYE: Do you hear from active duty military?

GINGER: Yes, all the time. Actually, there are so many who have shared their gratitude. It’s incredibly humbling to have them say thank you to me. It seems against the grain. There are no words for me to thank them enough. One story that stands out is from a Facebook follower. A woman whose friend lost her son Eddie in Afghanistan, as a show of honor to him, wore our boot campaign boots to his funeral.

She sent us pictures and the words she spoke at the funeral. She decided that’s what she wanted to do to remember Eddie. We gave her a tangible way to show her love for him. I’m grateful that we’re able to help Americans to do that, and that our soldiers can see it, feel recognized and remembered over there and when they come home as well.

EYE: Is your main emphasis on those troops who have already come back home?

LEIGH ANN: That’s really our focus: what are their needs when they get back home…rehabilitation, special clothing, etc. We look at the whole person and give dollars to those organizations that are hands-on with the soldiers and help them to assimilate back to civilian life.

EYE: Do you think this is your life’s work now, that you won’t stop until everyone has their boots on?

GINGER: Our goal is to have a pair of boots on an American civilian for every active duty soldier oversees. That’s 1.4 million people. That’s a lot of work to do and a lot of feet. We feel we can get it done. Its people like you that help to spread the word about getting your boots on that make us feel confident that we can do that.

EYE: Because of the boot campaign, all five of you are now celebrities in your own right. Are you embracing your celebrity status?

LEIGH ANN: I think people most recognize us when we’re together with our boots on. When we are walking around town, by ourselves, with ponytails in our hair and wearing workout clothes, not so much.

GINGER: I’ll consider us famous when we go to see the troops in Afghanistan with the Dallas Cowboys Cheerleaders, and they cheer for us just as loud. Don’t know if that is ever gonna happen!!

EYE: I’m going to go get my boots on now!! To hear our radio interview with Ginger and Leigh Ann, just click here!