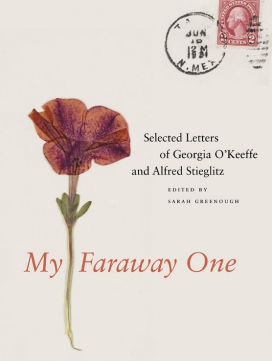 The incurable romantics among us need not lose hope. I’ve found the Holy Grail of love letters. I wasn’t looking for it, but there’s a lot of interest in the famous photographer Alfred Stieglitz here in New York. His personal collection of paintings from artists ranging from Henri Matisse to Georgia O’Keeffe closed its showing at the Metropolitan Museum of Art recently. This exhibit brought renewed attention to a book about Stieglitz and O’Keeffe (his wife) that came out last summer.

What seemed to fuel this passionate union of two extraordinary people were words.

A massive collection of their letters is entitled My Far Away One (Yale Press, 2011). The relationship between one of American art’s most famous couple began as a friendship, a professional connection which grew into a love affair and culminated in their marriage. What seemed to fuel this passionate union of two extraordinary people were words. Those words produced over 25,000 pages of letters.

My Far Away One is a compilation of 650 of those letters, carefully chosen and annotated by leading photography scholar Sarah Greenough. She is the photography curator of the National Gallery in Washington and was a friend of O’Keeffe’s.

This is the first volume of her work which includes the Stieglitz—O’Keeffe letters from 1915 to 1933. The second volume is expected to include letters from 1934 until Stieglitz’s death in 1946.

In this era of texting and instant messaging, it is hard to imagine that any couple could write so many letters. But theirs was a vastly different age. Even long distance telephone calls were not an option.

The couple wrote incessantly to each other, almost every day and sometimes two or three times a day. Through these letters, Stieglitz and O’Keeffe reported on the various details of their daily lives, communicated their thoughts about art, and ended up defining themselves in relation to each other.

O’Keeffe found Stieglitz’s letters like nothing she had ever read: “I think letters with so much humanness in them have never come to me before—I have wondered with everyone of them–what it is in them—how you put it in–or is it my imagination–seeing and feeling–finding what I want.”

He attached the photograph below taken of them kissing at Lake George to a letter to her dated July 10, 1929, writing beneath it, “I have destroyed 300 prints to-day. And much more literature. I haven’t the heart to destroy this…”

When they first began corresponding in 1915, Stieglitz was a 52-year-old married man at the height of his fame. He was an internationally acclaimed photographer who is widely credited with making photography accepted as a true art form in America. This YouTube video will give you a glimpse into the genius of Stieglitz.

He dominated the New York art scene through a succession of galleries in which he showcased various artists’ work. Georgia O’Keeffe was one of those artists. O’Keeffe was 28-years-old and an unknown, struggling painter who taught school in Texas. The two connected when a mutual friend brought O’Keeffe’s work to Stieglitz’s gallery. For Stieglitz, it was love at the first sight of O’Keeffe’s work; he became a life-long promoter. In him, O’Keeffe found a mentor and later a passionate lover who was miserable in his marriage.

Stieglitz wrote to her: “You are a very, very great woman–You have given me–I can’t tell you what it but it is something tremendous–something so overpowering that I feel as if I had shot up suddenly into the skies–I touched the stars–I found them all women–Women like you are a Woman.”

Stieglitz was to photograph O’Keeffe many times throughout her life, admiringly and strikingly. The first of these photos was a famous image of the artist’s hands.

The couple began living together in 1924 when O’Keeffe came to New York. Stieglitz divorced soon after and the two were married. Friends and colleagues said that their passion generated such heat that it literally eclipsed everything but each other in their eyes. But as with many long relationships, the cracks in this one started to show. O’Keeffe was much younger and wanted a baby. Stieglitz did not.

O’Keeffe also felt stifled by Stieglitz’s large family whom they lived with and who took much of her time. She was frustrated by the little attention she was able to devote to painting. To get away from spending summers with the Stieglitz family at their home in Lake George, O’Keeffe and a friend traveled to New Mexico. With the help of art patron Mabel Dodge Luhan, she found a studio in Taos and began to paint. This was a decisive moment.

In New Mexico, she not only found the freedom to paint but also the inspiration to create. Everything about this part of the country made her happy. She wrote Stieglitz that she longed to live in one of the adobe huts. Nature came alive to her in a way it had never done before.

While it was one of the happiest moments of her life, it brought about one of the saddest in Stieglitz’s. He fell apart and felt lost without her. She wrote to him that she hoped her new plan “carries no hurt to you.” But she was sure that “much life in me would die” without the chance to paint in New Mexico. O’Keeffe stayed in New Mexico. Stieglitz eventually took a mistress. In this YouTube video you’ll see O’Keeffe at 90 talk about her love of the Southwest and painting.

But the two stay married, kept writing, and O’Keeffe was at his beside when he died. In many ways, this part of O’Keeffe’s marriage to Stieglitz embodied the conflict in the heart of many modern women artists. On one side there is love and marriage and on the other there is ambition and work. It is a journey of hard choices, hard-won freedom, and sacrifices on both sides.

My Faraway One is a tribute to O’Keeffe and the man who helped her become a great artist.

O’Keeffe never remarried after Stieglitz’s death. She went on to become more acclaimed and more famous than perhaps any other woman painter of her time. She died in New Mexico at the age of 98. Sarah Greenough’s My Faraway One is a tribute to O’Keeffe and the man who helped her become a great artist. It is also a testament to how real love not only endures, but can inspire us to become our best selves.

I think that people today are cynical about enduring romantic love. Who can blame them? Fifty percent of all marriages end in divorce. I’m sure the great romances of today are stories yet to be told. But when a romantic like myself gets hold of a story like Tracy and Hepburn and Stieglitz and O’Keeffe something happens.

I want to believe in love. I also want to believe that the love between two people can give rise to something bigger and better than the sum of the two lovers. That’s what happened to these incomparable artists. If you’ve never experienced that kind of love, a merging of two souls, all I can say is that I wish it for you. Happy Valentine’s Day!

Sue Podbielski is a writer, producer, and community activist.