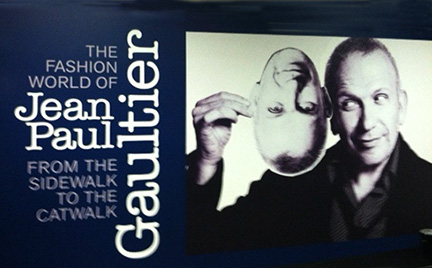 UPDATE 2/1/14: The Fashion World of Jean Paul Gaultier exhibition is currently at the Brooklyn Museum until February 23.

Story and Photos by Wendy Verlaine/April 5, 2012

“Designers are the catalysts of their time.  Their role is to translate the changes, the evolution of society.”  Jean Paul Gaultier

It is said our first impressions are usually right.   The moment I walked into the Jean Paul Gaultier: From the Sidewalk to the Catwalk show I felt an excitement, a charged energy that precedes something highly entertaining and novel.  There is much to discover about Gaultier at the de Young Museum in San Francisco as the exhibit lives up to first impressions and the demands of an important retrospective.  This video tour by Mel Van Dusen from KMVT will give you a sense of the surprises inside.

Upon entering the first of many rooms displaying more than 130 of Gaultier’s ready-to-wear and haute couture ensembles,  the “enfant terrible” of the couture world greeted me with, “Hello, you!  I know you.  Welcome to the show.”  The “terrible” moniker was given to him during the 80’s sexual revolution when Madonna wore  his iconic cone bra.

The “Hello” was startling.  It immediately made me laugh, and I felt like I had arrived.   Spotlighted “models” with their individually projected animated faces on their mannequin heads surrounded the room.  Images and voices emanated from hanging video projectors and amps suspended from above.

The result was talking, blinking, smiling, whispering models.  The looped recording of Gaultier captured his enthusiasm and energy.  Visitors wandered from room to room catching snips of mannequin mutterings or fully engaged conversations extolling philosophy, humor, self-examination or the incomprehensible.  I felt like I had crashed an Andy Warhol cocktail party of dressed-to-the-extreme haute couture mix of eccentrics.

This amusement park of fantasy fashion, philosophy, and awe-inspiring craftsmanship conveys Gaultier’s genius.  Born in 1952 in Arcueil, a suburb of Paris, to parents he describes as “modest but open-minded,” he was encouraged by his grandmother to be creative.  “As a child I was always drawn to those women who did not look like everyone else,” he said.

He loved that his grandmother allowed him to watch as much 1960’s television as he wanted, and in France, haute couture was covered as news.  TV, along with magazines and film, developed in him a critical and analytical fashion sense.  At the age of eighteen, he was hired by Pierre Cardin based on his sketches.

It is with his company that he learned the skills of haute couture dressmaking.  He soon left to join the avant-garde independent designers: Thierry Mugler, Vivienne Westwood, Kenzo, etc.

“Designers are the catalysts of their time.  Their role is to translate the changes, the evolution of society.”  Quotes like this by Gautier, displayed on museum plaques, sum up the tone of this show.  For those who believe art plays an important role in self-expression and social change, he speaks clearly and directly to us.

His message has several layers.  First, and most often misunderstood, he sees women as powerful, equal to or “…stronger than men. They are more interesting because they had to work harder to be heard.”

Gaultier’s iconic cone bra corsets, most notably worn by Madonna on her 1990 Blond Ambition World Tour, are not meant to shock, but to exaggerate strength and power.  Influenced by his grandmother’s pink satin corset, which hung in her armoire, and her strong sense of style, he uses it repeatedly in his creations as an object of beauty and strength.

The women’s movement was part of the changing political scene which Gaultier used in much of his work.  “I love it when strong women put fire on their bra,” he said, referring to the early days of the movement.  He sees the corset as beautiful and not something to hide.  Today’s mantra is, “I’m not waiting for a prince. I have arrived. I love to be beautiful.”

“My aim is not to be provocative. I just try to reflect what I see and feel around me.”

Gaultier sees beauty everywhere, and this is a second message. Influenced by the multi-ethnic immigrant suburbs of Paris, the raw side of the streets of London and the punk era, David Bowie, Fellini, etc., he defies the conventions of couture. Plastic bags, metal, wrapped tubing, aluminum cans, electronics–everything has potential.

Fashion is, as Gaultier says,“… too much about good taste. It is the tyranny of the streets (good taste), especially in Paris.” He breaks the codes of decent and indecent. “Your image is a game; play with it.”

He absorbs all that engages his senses–Mongolia, India, Africa, the streets, media.  He says he is often overwhelmed with possibilities.  He denies being an artist, but his extraordinarily detailed hand work and skill found in the metallic lace (which took 353 hours to make for a single piece), feathers, finely sewn seed beads and sequins, prove he is.

Some garments took over 1000 hours of skilled labor.   His iconic trench coat morphs into a skirt or shorts, and a half dress is also a half skirt.  Only a highly skilled artist can successfully execute such complicated designs.

Gaultier’s work also reflects the evolution of the role of men.  This is an important third message.  “Men are fragile, too.”  What appears to be a very private conversation between two males (mannequins) draws one closer to eavesdrop.  “Don’t worry about people looking at you.  Be yourself.”

A projected mirror image (his conscience?) responds to his questions and worries. “Why shouldn’t men wear nice fabrics?  You have a right to wear haute couture.  Do you think I am beautiful?  I think people are listening to us.  I can’t make small talk.”

Gautier never identified with the typical male persona.  As a child he felt different, emotionally fragile. During a recent interview with Suzy Menkes, fashion editor of the International Herald Tribune, he said, “I never liked sports or John Wayne.  I don’t even drive.”

Still, the bad boy image of Marlin Brando and James Dean intrigued him and illustrates how film led him to use leather, metal chains, studs mixed with lace, fur, etc., for men and women.  He loves rebellion, and his designs play a large part in film and theater.

If you are lucky enough to see this show, linger at the final room’s wall of running videos.  They are funny and playful.  I even caught the security guards laughing and back-slapping one another.  They show a happy, innocent, boyish Gaultier who loves his work and loves his life.

I think his overriding message is one of courage. We see him enjoying his freedom to work hard, his way.  He is so sure of his talent that he blithely breaks the rules with the vigor and genius unshackled creativity affords.

I left the show feeling how good it is to give oneself permission to break the rules of convention.

As Gaultier says, “Be yourself.  Do not feel you have to hide who you are.  And, play with fashion.  Wear it unthreateningly.  Wear it for yourself.  Show who you are, and you will be accepted.”

This thought is nothing short of exhilarating.  You can see this exhibit in San Francisco through August 10, 2012. 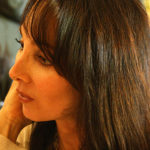