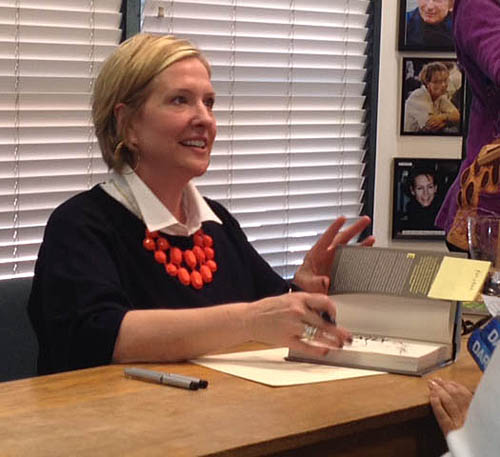 A recent visit to Book Passage in Marin, CA to hear a talk by Brené Brown, author of Daring Greatly–-How the Courage To Be Vulnerable Transforms the Way We Live, Love, Parent and Lead, was more than satisfying…it was exhilarating. 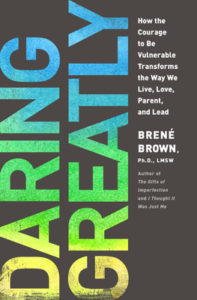 Who knew that a talk about vulnerability could be so fascinating.  The standing-room-only crowd loved Brené’s energy and ability to breathe life into a speech about perfectionism, shame, and clearing one’s armor.

Brené is a self-described storyteller whose newest book has been a popular best-seller.   More than that, she’s a research professor at the University of Houston Graduate College of Social Work.  She has spent 10 years studying the essence of vulnerability.

If you haven’t yet heard about her or read her books, you might want to watch this video of her 2010 TEDx Houston talk on vulnerability from YouTube.  In it she communicates about this sensitive topic with such humor and humanity that it struck a chord with more people than she ever could have imagined.

By the way, it is known as one of the most watched TEDx speeches with over six million viewers.

Her response to this talk is the following 2012 “Listening to Shame” TED Conference lecture at Long Beach.   Here she describes waking up after the Houston speech with the “worst vulnerability hangover of her life.”  She didn’t leave her house for three days and thought her life was over with the exposure she would receive on YouTube.  And yet that experience profoundly changed her.

What she’s learned, she says, is that vulnerability is not weakness as many people think.  Her message is to run into the arena with courage.  What she has also gleaned along the way,  she described amusingly and poignantly at Book Passage.

Here are my Top 10 Takeaways from her talk:

1.  Vulnerability is about showing up and being seen.

4.  Vulnerability is letting it all hang out.

5.  We are hardwired for connection. In its absence is suffering.

6.  Vulnerability isn’t easy. It can be dangerous and scary.

8.  It’s a daily practice to clear our armor.

9.  When perfectionism is driving, shame is riding shot gun.

10. Deliver us from fear and shame.

She leaves her audience with lots to think about.  Another thing to ponder is where she came up with the title of her book.  It turns out she was inspired by the Theodore Roosevelt speech, Citizenship in a Republic, excerpted here:

…because there is no effort without error and shortcoming; but who does actually strive to do the deeds; who knows great enthusiasms, the great devotions; who spends himself in a worthy cause;

who at the best knows in the end the triumph of high achievement, and who at the worst, if he fails, at least fails while daring greatly . . .”

Be sure to read the  whole speech on her website.  Roosevelt’s words described to her what it meant to be vulnerable.  Her book is certainly a testament to her own ability to dare greatly.

We hope to have Brené on our radio show to ask her more about her most thought-provoking stories and writings and why she loves the rock band Whitesnake.  She tells a fun story about singing their song, Here I Go Again, in her car!