Definition of Personal Transformation: That which can be achieved through struggle, self-examination and the execution of well-searched and self-altering ideologies.  Or, you can put on a hat!

This is what my sister and I concluded after a visit to London’s famous Harrods’ hat department.  With each “ try on,” a reversal of personality emerged, Madame de Pompadour to Madame Bovary.

I first discovered celebrated milliner, Jasmin Zorlu, in her studio in San Francisco during artist “open studios.”  It was magical.  No one exemplifies style and transformation better than highly skilled and creative Jasmin. She combines old world quality with unique hat design. 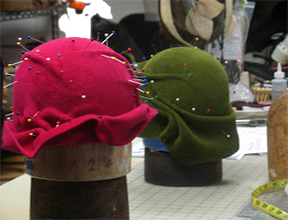 I saw hats in mid-process, some perched and resting, others hidden in hat boxes before journeying out the door. Jasmin and I had terrific fun trying on fabulous designs from snakeskin to cashmere to 1920’s cloche.  Each style altered my persona, and the change was dramatic.  I settled on a rabbit fur felt cloche.

The passion Jasmin brings to her trade is channeled directly into her choice of fabrics and her gift for the sculptural.  Fish leather, crinoline, rabbit fur felt, snakeskin, cashmere and junsin straw inspire her designs and craft which she has been honing for over twenty years.  She explained, “I like materials you can throw around and be rough with…”

Like many of us, I got my first glimpse of haute couture from my mother’s Harper’s Bazaar and Vogue magazines.  Jasmin was finding it on the streets of Italy, Turkey, Germany,  Japan and Iceland due to her mother’s work with the American government. She traveled to many of the museums around the world.

Both her parents recognized and indulged her early interest in being creative. Her father taught her how to use a sewing machine when she was just eleven, and she made her own clothes.

Her mother was an abstract expressionist artist who studied under Charles Pollock, one of Jackson Pollock’s brothers who greatly influenced him. She bought Jasmin a subscription to WWD (Women’s Wear Daily) when she was so young she could only look at the pictures.

As one might expect upon discovering Jasmin’s designs, she loves working with materials which respond to manipulation and retain shape. “I can confidently say that my hats are abstract and sculptural. I love crinoline! It comes in many different widths, treatments, and sizes from pleated to plain to tubular to narrow.”

Unlike what many of our mothers would allow, Jasmin wore what she wanted. “They never edited me, ” she says.  She recalled a trip to Metz, France at about age ten, where her parents searched for the then trendy red laced ballet flats because she “NEEDED” them.  And there were the red rain boots in Tokyo…

Jasmin came to the United States upon winning admittance to the prestigious Otis Art Institute of Parsons School of Design of Los Angeles.  But as she explains, “I didn’t go because I thought I wasn’t talented enough and it was in a dangerous neighborhood.  Coming from Iceland I was a bit scared.”

Instead she chose to go to the University of Michigan, and eventually connected with well-known hatter, Rod Keenan.  She moved to New York where she assisted him by hand sewing men’s hats.  A job with Espirit as a footwear designer brought her to San Francisco, but her passion as a milliner again led her to New York.

Her hats sold in Barney’s New York, and she shared a cooperative boutique with other designers in the lower East side.

Jasmin is emphatic about individualism and fashion. “You should not only wear impressive clothes, but if you wear an interesting hat, you’ll magnetically draw to you the people and circumstances which will improve your life!”

Acute observation and curiosity is a daily habit for Jasmin.  “My inspiration comes from so many things.  For instance my fish leather hat designs come from helmets and armour from Medieval times.”

When I asked if there is a point where being different tips over into too bizarre or bad taste, Jasmin said, “I think people like things that are bizarre, different because it is interesting.”

She laughed as she pointed out how in certain neighborhoods people will just look at her out of the corner of their eye, but in other areas people come up to her and say, “Wow!  I love that.  That’s great!” She wears her new designs to test the response she gets from others.

Jasmin’s personal style is a testament to individuality.  “You can’t design in a vacuum.  At some point you have to pay attention to what people are responding to. I do not believe in hats that attract so much attention you don’t see who is wearing it. Style is all about the individual.”

When I asked about the utilitarian side of wearing hats, Jasmin pointed out how her hats add warmth and shade, can be worn both day and night and work well for special events.  “I made my fish leather hat to frame the face and the points cover the frown lines.  It completely changes your face shape.”

Women undergoing chemotherapy like her head-hugging hats.  “They made them feel confident.  I make hats that bring out the beauty of the person who is wearing it,” she says.

Of course I wanted to know if celebrities have her hats.  Singer Erykah Badu commissioned a felt helmet named “Molecular Mermaid Helmet.” Neil Young bought a hat for his daughter, and Tom Waits bought one for his wife.

If you still imagine The House of Windsor when you think hats, then you should consider one of Jasmin’s workshops where you will emerge royally re-organized in your thinking about bowler hats, Sherlock Holmes and matching hats and purses.

Jasmin teaches millinery part time at Parsons The New School for Design in New York, along with workshops in ‘Freeform Hat Blocking’ and ‘Crinoline Cocktail Hatmaking’ several times a year in San Francisco and New York.  She exhibits world-wide.

Expect more surprises from Jasmin.  She plans on collaborating with artists by using their designs on printed hat fabric.  Look for her upcoming launch of a limited hat edition priced under $150 for Fall 2013, made in America.

Dashing out the door?  Don’t forget your hat!