Author-Activist Samar Yazbek Speaks About The Syrian Uprising From Exile

For nearly two  years, we’ve been watching the incredulous events unfold in the Syrian revolt against the Assad regime.  In the midst of this tragedy is Samar Yazbek, a Syrian novelist, journalist and activist.  She has penned nearly a dozen books including five novels.  Her most recent non-fiction work, A Woman in the Crossfire: Diaries of the Syrian Revolution, chronicles the first four months of the uprising.

“My purpose in writing the book is to deliver the voice of truth and justice.”  Samar Yazbek

Although from the same Alawite sect as President al-Assad, Samar used her celebrity and and savvy with social media to protest the regime.  She participated in peaceful demonstrations publicly and verbally, challenged her country’s leaders, and writes about how she was ultimately disowned by her relatives, arrested, beaten, and had to flee the country.

Her book is an unvarnished and sobering account of what she describes as the abuse and violence against the Syrian people. Through Yasmina Jraissati, her literary agent, I was able to ask Samar about her mission, her motivation, and her eyewitness account of the Syrian uprising…

EYE:  What prompted you to first speak out against the Assad regime?

SAMAR:  Many of the activists, myself and others, were speaking out against the regime for a long time, each one in his own way, whether through literature or politics. I had always done it through my novels and have been speaking about the sectarian military and intelligence systems that were founded by President al-Assad’s father since the beginning of his regime, which started approximately twenty years ago.

EYE:  Do you feel like you have a mission?

SAMAR: Yes, it is the mission of every intellectual to change the reality of the despotism in which he lives.

EYE:  You were called a traitor. You wrote that you were tortured and that your family disowned you. Were you prepared for such consequences when you started voicing your dissent?

SAMAR:  Yes, I was prepared but a lot of the difficulties were a surprise for me, yet I am still at ease with myself.  The pain could not be avoided.  This is part of the nature of life.

EYE:  How has this experience as a protestor changed you?

SAMAR:  It changed me a lot. I am able to say that this experience made me a different woman. It restored my relationship with reality and with literature and made me believe that there is a force that can change history, however strong the tyrants and despots are standing in its way.

But on the other hand, it changed my relationship with literature and writing. I have become less connected with myself in favor of being more connected to public issues.

“…I have discovered that I am a sensitive and fragile person on the inside, but at the same time strong.”

EYE:  Are there strengths you never knew you had?

SAMAR:  I have discovered that I am a sensitive and fragile person on the inside, but at the same time strong. I had known that I was a strong woman.  What was unknown to me then was my ability to persist in the defense of people and their rights. I discovered a strength, but it was the strength of personal contradictions inside me that made me hurt more than it should.

EYE:   Last October, in the middle of this intense activity, you won the PEN/Pinter International Writer of Courage Award that you share with the British Poet Laureate Carol Ann Duffy. What does this mean to you and for your cause?

SAMAR:  It means an increase in responsibility and commitments.  It also signifies a tribute to the Syrian people.

EYE:   Do you feel courageous?

EYE:   Recently the United Nations High Commissioner for Human Rights Navi Pillay stated that 60,000 people had been killed during Syria’s ongoing civil wars. You have been to the most dangerous places in the country and recorded how the people were resisting.  Do you feel lucky to be alive?

SAMAR:  Certainly I feel grateful because I am still alive. I am for life and against death. But from another perspective I feel guilty because we are alive and because there are people who die in our place.  Those are the truly courageous, who stand up for Syria now… only to die.  They are nothing but heroes.

EYE:   The Guardian reported that the government denounced the book as full of lies. Do you think your diaries will affect international readers’ ideas of what is going on in Syria?

SAMAR:  Yes, this was my ambition.  My purpose in writing this book is to deliver the voice of truth and justice. I am satisfied with the results. There are many people in the Western world and the U.S. who do not know the truth about what is happening, and why the revolution had arisen or begun.

They also don’t know how the Syrian regime carried out evil games for the sake of falsifying the reality of the revolution. I feel that I did what had to be done with this book.

EYE:   What is it like to be a Syrian woman? Are they given the same opportunities as men are in education? Are women very active in the revolution?

SAMAR:  Women in Syria before the revolution had not achieved their full rights. The women in the revolution were from organizations from the beginning of the protest movement. They played a key role in the revolt and made great efforts for the continuation of the uprising and its survival.

But I think that we women in Syria will have many challenges ahead of us.  After the rise of political Islam, we are fighting tyranny and dictatorships in addition to fighting religious extremism that wants to exclude women from society.

“…I don’t think about anything except returning to Syria.”

EYE:   You left Syria with your daughter, who is now 19, and went to Paris in July, 2011.  That’s when your diaries end.  Did you hate to leave your country?

SAMAR:  Yes, I was forced to leave my country against my will, and this torments me a lot.

EYE:  And then you sneaked back.  What made you return to this dangerous place?

SAMAR:  Returning means a lot to me. It means that I am part of the process of changing my country, but this return was not enough. I aspire to return permanently and absolutely after the fall of the regime of Bashar al-Assad in order to rebuild Syria, given the massive destruction inflicted on the Syrian people and civilization, including cities and archeological sites.

“As I step out onto the balcony, the lemon trees revive me.  This place is calm for a few moments, then gunfire breaks out.  Everybody knows that the city’s calm before was not a natural calm, since nobody could challenge the power of the security apparatus.  Agents are always in the street.  Suddenly the streets are transformed into a carnival of horror.  Chaos is everywhere.  Security forces watch the people: some flee, others get arbitrarily eliminated.  The gangs sprouted out of the ground just like everything here, out of thin air, without any rhyme or reason…”

EYE:  How do you handle the intensity of your life?

SAMAR:  It is as if I am somewhere outside where I am. It is a bit like living nowhere. I travel a lot. I meet with a lot of humanitarian organizations, politicians, and intellectuals from all over the world in order to transport the truth of what is happening.  I always feel that I am suffocating, and I don’t think about anything except returning to Syria.

The dark reality that makes me feel so lost is the amount of blood wasted daily in Syria and the massacres that do not stop against women, children and young people. When the massacres stop, perhaps I can return to my life. Now, I feel suffocated constantly.

“Writing these last words I resolve not to return to these pages until I can turn my diaries into a book.  I’d never be able to do that in Syria; if I could, I would just stay.  I will pack my bags and zip them up, closing along with them so many horrifying secrets I witnessed and that have happened to me.  I am afraid for them to be revealed.  I am afraid for my family and for my daughter…”

From the last chapter of A Woman in the Crossfire–9 July, 2011

EYE:   Are you seeing any progress in this revolution?

SAMAR:  Yes, the revolution is progressing, and the revolution will be victorious. This will happen sooner or later, but every day the fall of the regime of Bashar al-Assad is delayed means the increase of risks after his fall.

EYE:   Do you see a time when you will be back in Syria to live?

SAMAR:  I think it is not far away at all; it will be soon. That is what I hope.

EYE:  Thanks so much for making the time to give TWE this interview, Samar.  The insights and experiences described in your book have given us a remarkably personal glimpse into the Syrian conflict.

A Woman in the Crossfire by Samar Yazbek is available in North America through Consortium Book Sales and Distribution (cbsd.com) and amazon.com.

Samar’s answers translated  from Arabic to English by The International Institute of Connecticut (iiconn.org) 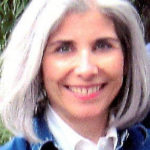 Patricia Caso was a television producer and an executive producer for 15 years. She then freelanced and volunteered while raising two young men with her husband, Laurence. Now, Patricia has the wonderful opportunity to interview and write for The Women’s Eye. You can contact Patricia here.