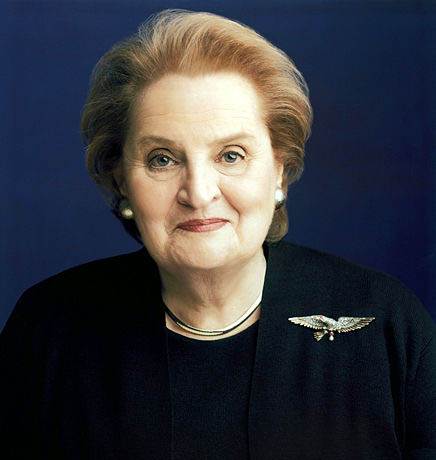 In celebration of International Women’s Day, I am reading Prague Winter: A Personal Story of Remembrance and War, 1937-1948, a fascinating book written by Dr. Madeleine Albright, one of the most accomplished and influential women of our time. When she took office as the 64th U.S. Secretary of State, Albright became the highest-ranking woman in the history of the U.S. government. 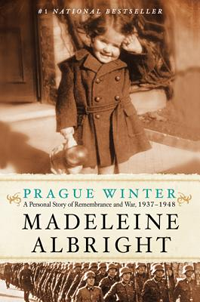 Recently, I was inspired by hearing her in a thought-provoking conversation with Book Passage CEO Elaine Petrocelli at the Dominican University’s Leadership Lecture Series (in partnership with Book Passage) in the San Francisco Bay area.

The first time I met Dr. Albright was at a World Leaders Symposium on the Dalmatian Coast in 2007. I was touring the site of the Bosnian War with some of the leaders who had played a crucial role in that particular piece of history. Albright was one of them.

When we discussed issues like Balkanization, violent religious extremism and the Iraq War, she struck me as both determined and pragmatic. “We need a surge in diplomacy as well as a surge in troops,” she insisted, assessing necessary next steps in Iraq, and pointedly disagreeing with another panelist. In her conversation with Petrocelli, what impressed me most were Albright’s curiosity and compassion.

Prague Winter is a story with three layers. First, it’s a memoir of Albright’s sudden discovery, when she was 59, of her family’s Jewish heritage and her search for the details of the family’s history. Second, it is a story of WWII-era politics told from the perspective of her homeland in Czechoslovakia.

Third, and even more intriguing, this book is an exploration of the moral complexities faced by Albright’s parents and their generation. That literary structure–which puts the personal within an historical context and demonstrates how each influences the other–makes the book a fascinating read.

Petrocelli asked about the Munich Agreement. This 1938 pact signed by Germany, France, the United Kingdom, and Italy–and without Czechoslovakian representation–annexed Czech border areas to Germany in an attempt to appease Hitler. I expected a rant about Albright’s beloved homeland being victimized, dismembered and sold down the river.

Instead, Albright explained the broader historical context of the agreement. The British and French were exhausted from WWI. They were tired of sending their young people into harm’s way, just as we Americans are tired of war today. They underestimated who Hitler was, she explained. That kind of insight must have served Albright, and all of us, well in her capacity as Secretary of State.

Albright is not an apologist for human imperfection, though. “Given the events described in this book,” she said, “we cannot help but acknowledge the capacity within us for unspeakable cruelty or, to give the virtuous their due, at least some degree of moral cowardice.”

“There is a piece of the traitor,” she writes, “within most of us, a slice of the collaborator…a touch of the unfeeling prison guard.”

Observations like these drive Albright to examine the reasons people make the choices they do:

“What prompts one person to act boldly in a moment of crisis and a second to seek shelter in the crowd?
Why do some people become stronger in the face of adversity while others quickly lose heart?
What drives many of us to look down on neighbors based on the flimsy pretexts of nationality and creed?
Is it education, spiritual belief, parental guidance, traumatic events, or more likely some combination that causes us to follow the paths that we do?”

Prague Winter explores the complexity of decision-making in morally ambiguous situations like wartime.

Her wry but forthright sense of humor was on display, too, as Albright recounted a “Diplomacy by Jewelry” incident sparked by one of the famous brooches written about on TWE and described in her book, Read my Pins: Stories from a Diplomat’s Jewel Box. “We found that the Russians had actually been bugging the State Department…The next time I met the Russian Foreign Minister I wore this huge bug, and he knew exactly…[what I meant].”

Although she refers to herself as an “accidental” diplomat, Albright seeks to understand and learn from the lessons of history. And she is committed to helping other women learn those lessons, too. She founded the Albright Institute for Global Affairs at Wellesley College, which helps young women prepare for roles as world leaders by introducing them to international scholars, practitioners, and thought leaders working on pressing world issues.

Madeleine Albright is a remarkable role model for women everywhere. Because of her service to the United States and to the world, her efforts to unite countries with common goals, and by breaking the glass ceiling, she is one of the reasons we celebrate International Women’s Day.

Through Albright’s deeply personal journey that she shares in Prague Winter, I have a better understanding of this complicated time in history and of her exceptional qualities as a world leader.  Thanks, Dr. Albright, for sharing your story.