UPDATE 6/2414: Elizabeth’s paperback of “The Signature of All Things” is published today. Check out her upcoming events.

“I know that there are very few greater pleasures in life than to … be subsumed by the work that you are obsessed with, and that’s completely who [Alma] is, and that’s totally based on me.” Elizabeth Gilbert

Bestselling authors Elizabeth Gilbert and Kelly Corrigan made me feel as though I’d just spent the evening talking with my two best girlfriends, even though they were sitting onstage at Dominican University in front of hundreds of people as they discussed German Romanticism, the rise of Empiricism, the effect of birth order on family dynamics and Tory Burch shoes. 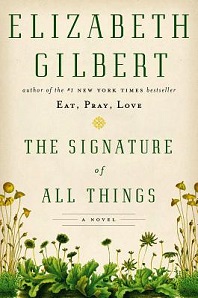 Corrigan interviewed Gilbert as part of Dominican’s Leadership Lecture Series, in partnership with Book Passage, an independent bookstore in Marin County, California. They were talking about Gilbert’s new novel, The Signature of All Things.

The book is about Alma Whittaker, a botanist born in 1800 to “potent and clever parents.” Alma grows up to study the miniature universe of mosses, and her story is a miniature reflection of the Darwinian Revolution that occurred during her lifetime.

“We now live in this world of scientists who have no divinity, and the faithful who have no reason,” Gilbert said. “You wish the divorced parents would just get together in a cafe at 10 a.m. for a cup of coffee.” She was referring to the 19th century division between science and spirit. “People were starting to suffer.”

Earlier, there had been no division between divinity and science, Gilbert explains. All the great ministers were naturalists; admiring and praising God’s creations was a natural–even organic–part of their work. But the 19th century was a painful moment in history. “It was like an awful divorce, and the parents have been fighting over the kids ever since.” Gilbert, who wrote a book about marriage called Committed, has a lot to say on the subject.

She also has a lot to say about the schism between science and divinity–five hundred pages worth in this new book. And Gilbert says it very well. So well, in fact, that I would happily have read another five hundred pages about evolution and moss biology and taxonomy and botanical illustration, if only she had written a longer tome.

Author Barbara Kingsolver, whom I’ve had the pleasure of writing about for TWE, agrees in her New York Times review: “Gilbert has established herself as a straight-up storyteller who dares us into adventures of worldly discovery, and this novel stands as a winning next act.”

Is this the same Elizabeth Gilbert who wrote Eat, Pray, Love? The book some critics dismissed as self-absorbed and overly emotional? The book that sold ten million copies, spent 200 weeks on New York Times bestseller list, and helped earn its author a spot on Time magazine’s list of the 100 most influential people in world? That Elizabeth Gilbert? Yes, it is. 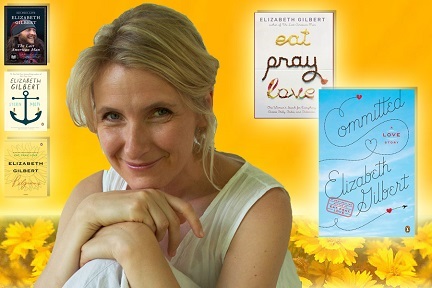 And the irony is not lost on her. Gilbert’s own spiritual side was on display in Eat Pray Love. “Some people loved it,” she says. (About ten million, I’m guessing.) But it made others feel nauseated and write snarky reviews and say things like, “Just don’t talk to me about that *** ashram,” Gilbert continues.

Readers who are more aligned with the empirical will appreciate The Signature of All Things. “This book is like a pair of sensible shoes,” Gilbert suggests. I respectfully disagree. True, the novel is solid storytelling, historically based, and exhaustively researched. But it is also lyrical, seductive, and addictive. More like the surprise pair of Tory Burch shoes Corrigan gave Gilbert during an onstage moment of female bonding.

There’s another irony: “This book wouldn’t exist without Eat Pray Love,” Gilbert says.“Eat Pray Love paid for this book. It was a very time-consuming book to write.” Gilbert did a lot of research and planning before she began writing–three years’ worth of interviews, reading, and travel, plus a seventy-page outline, for starters.

The Signature of All Things begins with the story of Alma’s parents, Henry and Beatrix Whittaker. Henry was fun to write about, Elizabeth says. “He was the most muscular writing I’ve ever done. He has no emotion except ambition–searing ambition and cunning.”

Those two qualities made Henry Whittaker into the third richest man in the western hemisphere. “Money followed him around,” Gilbert writes, “like a small, excited dog.”

The exceptionally well-educated Beatrix spoke seven languages and designed her gardens using Euclidian geometry. An austere and daunting Dutch Calvinist, she had the highest standards and expectations for her daughters. At a critically important juncture in Alma’s life, her mother reacts with anger: “As for her final two words, she spat them out like two sharp chips of ice: ‘Improve yourself.’”

Ambrose Pike, who becomes Alma’s soulmate (and, briefly, her husband) wanders into this Whittaker world of education and ambition. The couple–Alma a scientist who studies earth-bound mosses, Ambrose an artist who makes exquisite images of ethereal orchids–represent the opposing forces of rationalism and spiritualism.

An impressive scholar, Alma is unattractive but sturdy, stubborn but brilliant.  She’s “a woman whose life is saved, over and over again, by her work,” Gilbert explains. Alma’s exhaustive botanical studies insulate her from isolation and boredom, depression and jealousy, loss and loneliness. Gilbert certainly understands loving one’s work. “It’s almost a guilty secret: I enjoy my work so much!” she says.

The Signature of All Things is also a cautionary tale, though, because as much as Alma loves her work, she holds back from publishing. One thing I tell young women, Gilbert says, is: Don’t hold back. With respect to writing, that means including all your big ideas, emptying yourself of content. “When you finish a book you should be empty. Nothing should be held back for the next one. There’s not even any starter yeast. There’s nothing left. Then ideas start to trickle back in, like beach sand or cockroaches–you just can’t keep them out of the house.”

Above is the entire conversation at Dominican University for you to enjoy. I’m already eager for Gilbert’s next book. She’s a terrific storyteller, and, no matter what her next topic is, I know she won’t hold back.