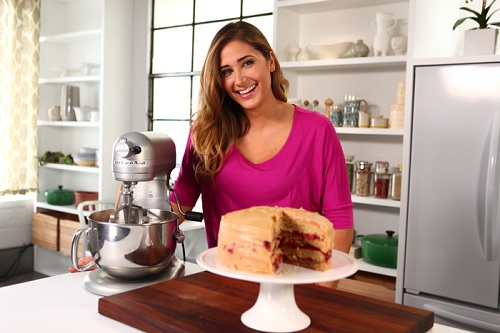 Eating delicious, nutritious food and getting a great abs workout from laughter at the same time? Well, that is exactly what happens when you eat the delicious gluten-free meals prepared by my friend and popular chef, Alex Thomopoulos. She always amazes me with her combination of mouthwatering recipes served with a side of comedy.

“I like to incorporate real life and comedy into my food writing, to take real life experiences and apply those to the gluten-free recipes I create.”  Alex Thomopoulos

Alex is the host of YouTube’s HUNGRY Bites & Booze: Gluten-Free and Gluten-Free with Alex T. She’s a stand-up comic-turned-chef who, in 2010, was diagnosed with celiac disease, an autoimmune digestive condition that can be very harmful if not dealt with.  This disease presented a big challenge for a chef, because it requires the elimination of all gluten, which means anything made with wheat-breads, cakes, soy sauce, broths, soups, pasta and more.

By readjusting her lifestyle, Alex chose to continue pursuing her goal to be a gourmet cook. She now prepares foods for those making the choice to live gluten-free. I wanted to find out how Alex was able to accept her challenging diet and how she now inspires others to embrace this way of life…

EYE: Your goal initially was to be a stand-up comedian. What inspired you to change paths and pursue being a chef? 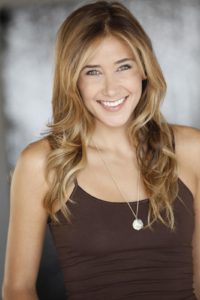 ALEX: Money (as she laughs). I was struggling to make money and it was hard to make a living doing stand-up comedy. I really admire stand-up comedians because it is really hard to earn a living, so you have to truly love it to do it. Almost three years into it I didn’t love it.

Having made this life decision and declaration to my parents that I was going to drop out of school and be a stand-up comedian, I realized that this is not what I wanted. I then discovered that I was finding my therapy in the kitchen. I would have my friends over and cook for them and barbecue during the summer and I found so much joy doing that.

I thought, wow, I am really good at this and then I decided to go to culinary school.

EYE: So you started working as a personal chef. What was your first assignment?

ALEX: While I was at culinary school, I was living on my friend’s couch and she owned a Pilates studio. One of her clients was Leslie Mann from the film This is 40. They needed a private chef on the set. So I interviewed for the job and got it and haven’t stopped working since. I worked for them for two years.

They were so lovely and it was such an amazing experience. It was not what you would think it would be like to work for a celebrity. It gave me an easy in to the private chef world. I know so many chefs that have nightmare celebrity stories. People on the set could not have been lovelier. It was really nice to have a good start and it inspired me to keep going.

“So many people have a misconception that if you cut out gluten you will feel better in a week, but it takes a very long time…”

EYE: You became aware that you had celiac disease in 2010. What were your first symptoms?

ALEX: I was really sick all the time. I had hair loss, some of my teeth were chipping, and I was really nutrient deficient, which is what happens with this disease. You don’t absorb nutrients. I was basically walking around as a shell of a person. I went to the doctor and she told me to cut out the gluten.

I didn’t take her seriously until my hair started rapidly falling out. Once that happened I completely cut out gluten and I realized how much better I felt. All of my symptoms went away. It definitely did not happen overnight though. So many people have a misconception that if you cut out gluten you will feel better in a week, but it takes a very long time for your body to repair itself.

EYE: Food plays a leading role in your life. It is your career, and you are in a family that loves to cook and eat together. Your mom is Cristina Ferrare, host of Hallmark’s Home & Family, and a fabulous cook. Was it hard to adjust your life after being diagnosed with celiac disease?

ALEX: The biggest challenge was being in culinary school with the disease. It was a lot of French-style cooking and baking. I was surrounded by pastries and flour-based foods. Flour was everywhere in the classroom and it was hard to avoid. It was also difficult getting my mom to adjust her cooking style. When my mom was making a meal she would take the tongs from her pasta and use them for my gluten-free pasta.

As little as 1/8 of a teaspoon can make me feel really bad. I try to be very careful to not cross-contaminate, but my mom is all over the place so she doesn’t really pay attention. It wasn’t until she finally saw how sick I was getting that she realized how careful she had to be. It took a long time to retrain her. We had to get a separate toaster and deep clean all our kitchen products if they touched gluten.

EYE: There is a popular trend of people wanting to cut out gluten in our society. Do you recommend all individuals following a gluten-free diet?

ALEX: I would because gluten is an inflammatory, so for those who don’t eat gluten, they find themselves feeling a little bit better and less tired. The wheat that we eat is so genetically modified and so high in gluten that it is hard for our bodies to digest.

Now would I recommend eating gluten-free food? And breads? Not necessarily because they are very high in starches which are also difficult to digest. And a lot of people think that they are going to eat gluten-free bread and that they can eat seven slices because it’s gluten-free. What they don’t realize is that it is probably higher in fat and calories than normal bread, as well as a lot of other gluten-free foods.

So people need to educate themselves just like the way you would look at the nutrition label on regular foods. Make sure to look at the labels on gluten-free foods because sometimes they are very misleading.

The biggest misconception in the gluten-free world is that people think they will lose weight. And, yes you will if you cut out the bread that comes to the table before dinner, but are you going to lose weight eating gluten-free cake? No.

EYE: What is your greatest piece of advice for someone who is trying to cut out gluten or has been diagnosed with celiac disease?

ALEX: I have been told I have a number of food restrictions and every time I get told no I have to look at what the yes is. People get so discouraged when they hear they cannot have a list of this, this, and this. So I try to focus on what I can have: squash, lentils, quinoa, sweet potatoes–things that give you that starchy satisfaction but without all the side affects.

It is all about focusing on the positives rather than the negatives. This really helped me a lot because even when I went to see the doctor the other day, she gave me a long list of foods I could not eat, and I told her to show me the list I can eat rather than the ones I cannot. It made me feel more inspired to go to the market and find all of the foods I can eat and create delicious recipes.

EYE: Was it difficult starting to create recipes that were gluten-free? What was the process like?

ALEX: It was very hard, but luckily there are so many great blogs out there that have plenty of recipes and information on gluten-free recipes. I am not an expert at the gluten-free baking and blending of flours because I would much rather sit down with a giant bowl of pasta rather than a piece of cake.

EYE: How would you describe your style of cooking and recipes?

ALEX: My recipes are food that happens to be gluten-free. I am focusing on recipes that anyone can eat in their everyday life and that you could serve at a dinner table. I like to incorporate real life and comedy into my food writing, to take real life experiences and apply those into the gluten-free recipes I create.

EYE: Thanks so much for sharing this valuable information. Alex’ site For more delicious gluten-free recipes by Alex, go to her website and the YouTube channel, HUNGRY.