The photos in the Boston Globe speak for the courage and resilience of the Marathon runners. Below is a
powerful picture of the Corcoran family taken by the Globe staff as crowds cheered. 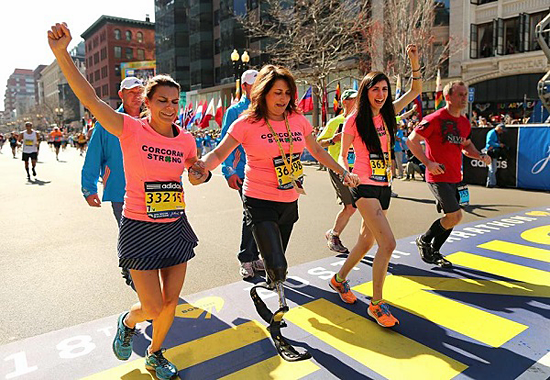 Celeste Corcoran, who lost both legs below the knees in the bombing, crossed the finish line
having run the last block with her daughter, Sydney (r), who was severely injured last April.
Celeste’s sister, Carmen Acabbo, joined them (l).

“The negative power is gone from this spot,” said Corcoran. “Terrorists never, ever, win.”
The Globe described the new tatoo on her wrist as reading, “choose to live.”
You can see more Globe photos here.

TOP 10: In Daytime TV, Women Run the Show
Next Post: TOP 10: On Earth Day, Look to Women for Innovation and Impact