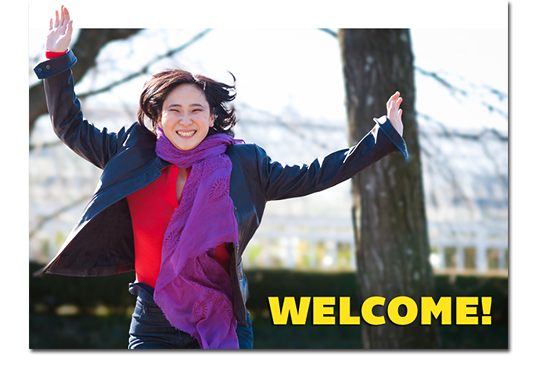 UPDATE 9/29/15: What I Found at the Westchester Olympic Triathlon

UPDATE 7/24/15: My First Sprint Triathlon–Fear, Fun and Friendship at the Nantucket Tri

Patty Chang Anker, the author of Some Nerve: Lessons Learned While Becoming Brave was facing a big fear when I spoke to her last time. The challenge she faced was learning to ride a bike at the age of 40. She took her own advice, found ‘some nerve’ and was able to conquer that fear and many more.

“There were a lot of skills that made me highly nervous so I never practiced. If you don’t practice, that is a huge element of fear.”  Patty Chang Anker

She set out, not just to ride around the block, but to bike 40 miles through the five boroughs of New York City on the TD Five Boro Bike Tour recently with 32,000 other racers. Returning to  the radio show, she  gave me the lowdown on how she did on the demanding course.  No training wheels necessary for Patty now…

PATTY: I’m alive! Thank you for your prayers! Your thoughts carried me through the day! 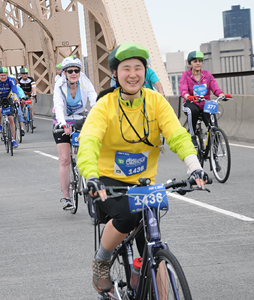 STACEY: Yaaayyyy”¼! Being the author with the title Some Nerve you had to put your pedals where your mouth was, right?

PATTY: It was highly inconvenient for me to have written a book with that in the title and facing that fear. I was approached by Bike New York which provides free bike lessons to kids and adults across the City.

For the book, I took their adult Learn To Ride class and my kids took the Kids Learn To Ride class. It was a wonderful experience which I wrote about in my book. Then, I promptly forgot about it until they got in touch with me and asked if I’d be interested in doing a bike tour. And I said, “Whaaaat??”

STACEY: Isn’t that nice that they remembered you?! Haha”¼

PATTY: I was really busy facing other fears with public speaking and women’s self-defense classes, and I really hadn’t gotten back on the bike.

STACEY: You really had not quite conquered riding a bicycle, had you?

PATTY: I really hadn’t. I was game with my first lesson, learning how to balance and how to turn and brake. I wasn’t too good at getting off the bike. I was better going left than right. There was a lot to work on.

I was scared to go out in the world with other elements, like having other bikes on the path. I was terrified of getting out on the road or having to take a hand off the handlebar to signal. There were a lot of skills that made me highly nervous so I never practiced. If you don’t practice, that is a huge element of fear. 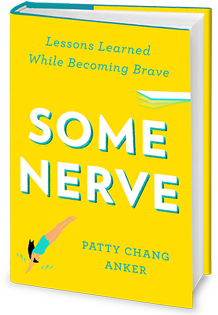 STACEY: You were an expert having written the book. But you had to be afraid and overcome your own fears to help other people. Did you discover other fears?

PATTY: I think that another underlying fear of mine is the fear of failure or that I won’t see something through. In my life, I’ve quit a lot of things. As soon as it gets discouraging, as soon as I feel like I might fail, I opt out.

I’d say I wasn’t cut out for that thing, to leave it to other people. I’m not very athletic. It’s not my strength, that it’s a waste of my time.

STACEY: Why does that happen?

PATTY: It’s just that kind of thinking that can keep you from pushing through the challenges. Once you push through them, that’s where courage lies, that’s where strength gets built. That’s where facing yourself comes in.

All the goodies come from working through that, and in the past, that’s where I took the signal to quit. On the worst day, I would quit before I began. There were all sorts of things I just wouldn’t do.

STACEY: If that was your pattern, then what changed for you?

PATTY: What I discovered interviewing people who faced all kinds of fears was the stories we tell ourselves about why we don’t do certain things. Whether it’s our cultural background, like what I said to myself–I’m Chinese-American and Chinese-Americans aren’t very outdoorsy or athletic unless you are training for the Olympics and then we always win gold.

Then there is the values’ story, that we place more value on education rather than physical activity so I never developed this as a strength.

STACEY: How did you change your mindset?

PATTY: What I learned from hearing this over and over again in regard to swimming or driving or fear of proposing a toast, we think we have reasons, but they are actually just stories we tell about why we hold ourselves back.

“Open yourself up to saying, ‘I am capable of growing, changing,’ and allow yourself ups and downs.”

I literally crashed a couple of days before the bike tour. I was going too slow. All my fears were that I would be going too fast, going downhill and out of control and creating a terrible crash.

I was actually pedaling uphill into my own driveway! It was humiliating. One of my teammates said if your pedals are no longer moving, your feet should no longer be on them. Crashes happen. You may get hurt. It just is the way life is. So, you can’t let that stop you.

STACEY: I understand you had a team that joined you on this bike endeavor.

PATTY: Yes. Team #SomeNerve. It was amazing. Over 40 people joined from across the country. There were a number of riders did not know anyone. I think that takes a lot of nerve. Over half the team had never done the 5 Boro Bike Tour before.

There were several people who worried that they would not finish, me, prime among them. It was a huge sense of accomplishment. Everyone who set out to finish, finished. The feeling at the end was incredible.

STACEY: Tell me about this tour. How long did you prepare for it? Were you fearful up until you crossed the starting line?

PATTY: I was fearful all the way to the finish line. Are you kidding me? You are talking to a woman who has so many fears, she wrote a book about it. The fear did not stop.

“I think that was a huge lesson in life too. The fears don’t stop.”

If you are someone who naturally worries about things, a lot of enjoying life is to be able to navigate that. I actually declared this challenge around New Year’s Day in January. It was a May Tour, and I bought my bike in February.

At that point, I could not bike around the block. I tried a test run on my new bike, and I had to get off. I was weeping. I was going down hill and there was a car that was trying to parallel park and there was intersecting traffic. I was so overwhelmed that I almost quit right there.

STACEY: How were you able to continue?

PATTY: What I’ll always remember about that was it happened right below the Manhattan Bridge. About eight weeks later, I was doing a training ride over the Manhattan Bridge and my husband called down and said “Look down, look down! That’s the street where you almost quit!”

Eight weeks later I was already crossing two bridges biking ten miles. The amount of progress one can make when one puts your mind to it is tremendous. 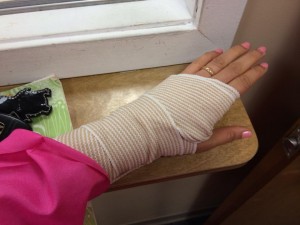 STACEY: How did you get through with the hand injury you suffered?

PATTY: I had this sense of determination that I never felt before. I think that’s ‘some nerve.’ In the past, if I hurt myself I would have felt, that’s it, I’m not supposed to be doing this. It is a sign from God.

STACEY: You have scars to prove it now, right?

PATTY: I never understood what that meant before when people would say that, but now I do.

STACEY: It probably got worse towards the end. You must have been exhausted.

PATTY: Yes. We had brutal headwinds and I felt like I was moving backwards not making any progress at all. It’s so hard to have any faith in yourself when you are going beyond anything you’ve ever done before.

A friend riding beside me put his hand on my back for a little boost and that felt so good. I had this encouragement from my team the whole time, which was absolutely critical. Then there was an uphill over ‘the beast,’ theVerazanno Bridge.

It’s two miles, the longest suspension bridge in America, and it’s the end of the tour. After you’ve been dealing with all these potholes and headwinds, etc.  You’re going up this on-ramp. By then, I was crying. I was weeping. It was pure exhaustion.

Many people were dropping back to walk their bikes up. I felt like if I got off I would never be able to get back on.

STACEY: How did you ever finish? 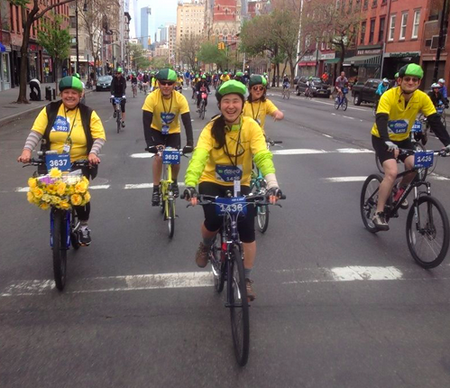 PATTY: There was all this inspirational writing on the floor of the bridge, “keep cranking, four down, 1 to go,” and U2’s Beautiful Day was blasting and it was so inspiring. All those thoughts–I can’t do it, I can’t do it I’m not good enough, I won’t be able to finish–all of a sudden it leveled off.

One moment you are pedaling as hard as you can and it is so painful,then the next one becomes easier. Then I realized I’ve done it, I am going to finish. It just erased all those negative thoughts. They were gone because I did it. And it was proof.

STACEY: What do you want people to take away from your challenging experience?

If anyone were to say that Patty Chang Anker is sporty before the last four months, they would say, “How many people are named Patty Chang Anker? She’s not the one I know.” But you see, I CAN do athletic things.

It’s opened up my life and I can enjoy it with my husband and children. We are planning our vacations differently now. It can really add spice to your life and be meaningful in a way that I never anticipated. So, pick the thing that is out of character and see what you learn from it.

STACEY: How can you top biking? What’s next for you? How about a triathalon?

PATTY: You know the word “triathalon” has been whispered to me. I would consider a try. But, because of my fear of open water, that’s the next frontier for me.

STACEY: You have to let us know how that goes. Thank you for joining us! Again, Patty’s book is Some Nerve. It’s very inspirational and a terrific read.