“In the end, getting Kathi’s work published was the best possible way to honor this woman who so loved books, authors, bookstores and libraries.” Sam Barry, husband of Kathi Kamen Goldmark

There was off-key group singing involved–call and response. Blues harmonica and pedal-steel guitar from two members of the Los Train Wreck band featured prominently. A harmonica-playing widower in a woman’s bright red wig sang something affectionately known as “The Slut Song.”

Noted author Amy Tan was on stage, with her dry sense of humor, a beautiful purple jacket gifted to her by a ghost, and her little dog Bobo. No doubt about it; this was the craziest fun I’ve ever had at an author event. But the author wasn’t there.

Kathi Kamen Goldmark succumbed to cancer in 2012 after having written, but not yet published, the novel Her Wild Oats, the story of a wise and generous young woman, a honky-tonk band on tour, and a 13-year-old genius harmonica player.

We were at Book Passage in Corte Madera, California–along with the late author’s husband Sam Barry, and her friends, writers Susanne Pari and Amy Tan–to celebrate the book’s publication. We ended up celebrating Kathi’s life. Again. I didn’t know Kathi, but she was clearly someone who inspired many celebrations. 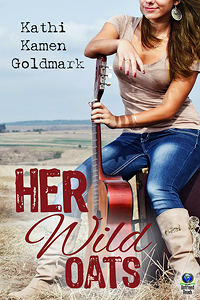 Sam explains, “After the memorial a group of us were discussing how to honor Kathi’s life. We talked about dedicating one of those lovely benches in San Francisco, but this didn’t seem appropriate, as she basically never sat down. A steering wheel on the wall of a nightclub or bookstore would have been more appropriate. In the end, getting Kathi’s work published was the best possible way to honor this woman who so loved books, authors, bookstores and libraries.”

Kathi and books go back a long way. In addition to being a radio and music producer, songwriter, and musician, Kathi was an author, columnist, publishing consultant, and media escort. In the early 80s, she founded a company that worked with authors on book tours. They loved being with Kathi, whose wide circle of friends, intimate knowledge of San Francisco’s best hot spots, and effervescent personality provided entertainment for the entertainers.

Tim Cahill, adventurer, author, and founding editor of Outside magazine, remembers those early days when Kathi helped authors visiting San Francisco: “Kathy brightened the drudgery of a book tour and she was never ever shy about telling you which currently touring authors were acting badly (that is, worse than me.)”

In fact, Kathi ended up befriending so many authors that she easily convinced a dozen or so to form a band called the Rock Bottom Remainders, a “hard listening” rock ‘n’ roll group made up of best-selling authors with dubious musical abilities. Kathi founded the band intending it to be a one-night fundraiser, but her personality kept it going. 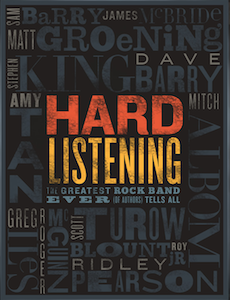 Last year the Rock Bottom Remainders celebrated Kathi’s life by publishing an interactive e-book in which they shared “the behind-the-scenes, uncensored story of their two decades of friendship, love, writing, and the redemptive power of rock ‘n’ roll.”

It’s called Hard Listening: The Greatest Rock Band Ever (of Authors) Tells All by Stephen King, Scott Turow, Mitch Albom, Amy Tan, Matt Groening, Dave Barry, Roy Blount Jr., James McBride, Ridley Pearson, Greg Iles, Sam Barry, and Roger McGuinn. (McGuinn was lead singer and lead guitarist for many of The Byrds’ songs; the band did have some musical chops!) The authors are donating all their proceeds towards payment of Kathi’s medical bills–that’s the kind of loyalty she inspired.

Where did the widower in a red wig come in? That was Kathi’s husband Sam, singing her trademark song, “Older Than Him, aka The Slut Song.” The bright red wig was a tribute to Kathi’s red hair; the song’s clever lyrics provided a glimpse of Kathi’s whacky sense of humor.

And what of Amy Tan’s ghostly garb? Amy told us the story of losing one of her favorite jackets–the sultry purple one she often wears for special events (she’s wearing it in the photo below). The jacket had been missing for a long time. Amy had searched everywhere for it and was sadly resigned to the fact that she’d never see it again.

How was the jacket a sign? Well, it appeared–from nowhere, just after Amy had asked the universe for a sign from Kathi–in Amy’s closet. The jacket materialized in a rumpled ball, which was reminiscent of Kathi’s style. (Everything in Amy’s closet is always in perfect order.) Amy is wise; she knew immediately that Kathi had delivered the jacket.

For those of us who don’t have such direct access to Kathi, Her Wild Oats is an exuberant connection. Susanne Pari read from the first chapter, introducing the protagonist, Arizona Rosenblatt, her cheating husband-with-a-hand-gun, missing money, a bizarre threat, and an omen delivered by a singing teddy bear.

The story, like Kathi’s own life, is filled with quirky characters who touch one another in meaningful ways. Reading Her Wild Oats made me wish I’d known Kathi. She will certainly inspire many more celebrations.

By Laurie McAndish King/Aug. 31, 2014–We gathered for the launching of Her Wild Oats, but we ended up celebrating Kathy Kamen Goldmark‘s life. This beloved, creative whirlwind succumbed to…More