LISTEN TO OUR LATEST PODCAST: Vanessa Ruiz on the Challenges Facing Journalists Today

I am particularly interested in the issues facing intrepid women who are starting companies. CNBC recently had a fascinating piece reporting that women own one-third of businesses now. That’s nine million in the United States alone and those generate about 1.4 trillion dollars in sales. Wow!

However, when you dig down a little deeper, you find that women own less than 10% of the high growth firms. In looking to find out why that gap exists, I was delighted to put that question to Deborah Jackson, CEO of Plum Alley. She established her e-commerce crowdfunding site with the purpose of connecting women with money and finding sources for the capital they need.

“Women actually want a different look and feel; they want a community. They operate differently. Their companies are different; their dreams are different. So we created a very robust and powerful platform for women…”  Deborah Jackson

What a great idea! Deborah says women can change the world with their entrepreneurial businesses and she’s out to enable them to make that important contribution. Here’s an excerpt of my interview on The Women’s Eye Radio Show….

GLORIA: We need your kind of company to help fund women’s businesses, Deborah!

DEBORAH: Thank you so much. No one can do this alone. Women are such an untapped resource, have so much brain power and so much energy, and they are founding companies at record rates. They need to get money. We have to do this together.

GLORIA: Tell me how you started Plum Alley and what it does for women.

DEBORAH: I worked on Wall Street for over 20 years. My last job there was in healthcare technology. I became very familiar with the internet and very involved with early stage companies. I really felt that women did not have equal access to capital.

I saw that it was not a level playing field. Many great women with talent were not able to get to the highest level of Wall Street firms. So I started mentoring entrepreneurs, women who were starting companies in the New York area. There were really terrific women who were creating hardware for all kinds of things.

GLORIA: Whom do you think controls the money that women need to fund their companies?

DEBORAH: What I found is the flow of money is really controlled by Wall Street and by venture capitalists. When I looked at the data, I found that female-founded companies don’t get as much capital as their male counterparts.

Roughly 5% of early stage money, that’s angel and venture capital, is forwarded to companies started by women. It means that the vast majority of the money for those companies is falling to male-started businesses. That’s just inequitable.

“If these female-founded companies are starved for cash, if they cannot grow because they are not funded, then that has huge implications not only for those companies but our economy as well.”

GLORIA: In my own research and the work that I’ve done to understand women’s relationship with power and leadership, I’ve often found that women need a lot of coaching and need to learn that they are worthy of asking. Is it that we don’t think big enough and we don’t ask big enough? Or, is it that the barriers are just so great?

So, it’s not that they are consciously thinking they cannot support the project. It’s that they aren’t linking to the product, and if you cannot link to it, then you’re probably not going to write a check to that company. 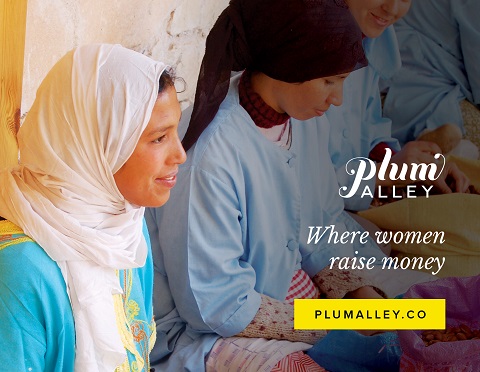 GLORIA: How do women get beyond those barriers?

DEBORAH: This is why I founded Plum Alley. These companies need more sales, more revenues, and they also need capital to grow.

We don’t need every woman to start from point zero, worried about how they can raise money and how it works. Why don’t we make that simple for women? We at Plum Alley have that expertise. We wanted to help them in a user-friendly way.  So, what we did about two years ago was launch our crowdfunding platform to help women entrepreneurs and project creators.

GLORIA: What is crowdfunding and how does Plum Alley implement it?

DEBORAH: We have e-commerce products for women and we also are a platform for women who raise money not only for their companies, but for their ideas and projects. You may have heard about Kickstarter, or Indiegogo, companies that have been around for five to seven years, much longer than we have. Those companies were an inspiration for what we are doing.

We saw there was a market, that people have the behavior of finding campaigns and funding online. Then we looked at the data. We saw that the existing sites are primarily focused, 78% or more, on the male audience.

Women actually want a different look and feel; they want a community. They operate differently. Their companies are different; their dreams are different. So we created a very robust and powerful platform for women that would raise money for their projects.

GLORIA: How is your approach to crowdfunding different?

DEBORAH: We do a lot more than other companies do. The site gives you the nuts and bolts, the nitty gritty, the “this-is-what-you-do” to launch a campaign.  When you upload basic information on our site to raise money, you are then invited to another section of our site which gives you the six stages of raising capital; how to put together a budget; how to present your tag line; how to describe what you are doing, etc.

We address a lot of midunderstandings  about crowdfunding. There are many myths out there.

GLORIA: What do you mean by myths?

DEBORAH: People think they can just upload a campaign on a website and people will come and find them and give them money. It should be that easy! The way it really works is that when you upload a campaign, you then go to your community, your network.

Women have far bigger networks than they appreciate. Think of your network as being the other moms you know or where you went to college or your religious institution or your tennis club. Women are very social creatures; we have huge networks of other women.

GLORIA: What is necessary to create a campaign for funds? How do you start?

DEBORAH: In a crowdfunding campaign, you systematically organize lists of who you know and come up with an estimate of how much money you think they are in a position to give you. Then you launch a campaign to reach out to your network. 80% of the money that’s raised on a crowdfunding platform comes from your own network.

“Then roughly 20% comes from, in our case, the Plum Alley community, which is pretty large. If you’ve ever done any fundraising, political or school fundraising or college, what do you start with? You start with a list of alumni, people you know.”

GLORIA: So it’s the same as any other endeavor in life.  You have to ask to get.

DEBORAH: Absolutely. Sometimes women may be a little chicken to ask their friends. Keep in mind that we help you do your homework, upload the campaign, create a description and choose photos.  And we tell you the best practices. We give you a lot of feedback.

Once you launch a campaign, then it’s much easier to say to your friends that you’ve done something you’ve cared about for a long time and you are looking for suporters. They can check out your page. It has the url and “please contribute” on it. Most times your friends will contribute what they are comfortable giving.

On our platform, the average contribution made through a campaign is slightly over $100. Then, of course, there are one or two people that may give $1,000 or $5,000. So, that’s how crowdfunding works. I view it as the first point of entry in an ongoing capital raise, a capital formation as you grow your company. 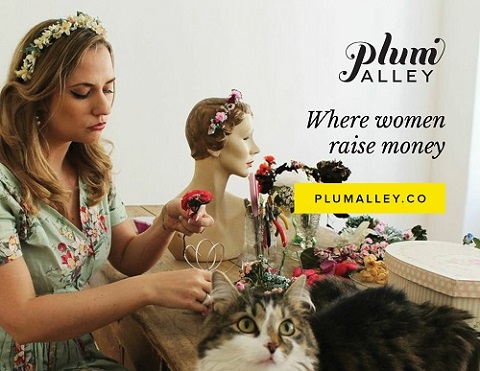 GLORIA: How can we encourage, teach, engage more women in helping other women start these businesses because we are so much stronger together?

DEBORAH: We have seen thousands of women come forward on our platform and contribute money to other women. So there’s no lack of women out there once they are given the opportunity to invest in female-founded companies.

Women typically do “make-a difference”  and give to philanthropic causes or not-for-profit organizations. I’m not saying don’t support those. I give my fair share, but there is another way you can make a difference. Know that women don’t get capital in the same amount men get.

“When you help that woman, if her company is successful, the number one thing is that will create wealth for her. Then there’s the trickle down that will help her family, community and probably other women do good in the world. You can help those women with their dream.”

GLORIA: Deborah, that is fantastic information. In your early days I read where you wanted to be Annie Oakley and I think she was a great role model for you. I have this vision of you out there rootin’ and tootin’ and leading the charge for women entrepreneurs. Thank you for what you are doing and thanks for being on The Women’s Eye.

This is an excerpt from our interview with Deborah Jackson on The Women’s Eye Radio Show. To listen to our full interview, click HERE. Enjoy!