Ultramarathoner Molly Sheridan is a self-professed “warrior goddess.” This mother of three is a motivational speaker, trainer and entrepreneur, and has over 50 ultramarathons under her belt. An ultra race is anything over 26.2 miles, which makes Sheridan’s accomplishments even more amazing.

She didn’t run her very first marathon until she was 48! But in her book, Running Past Midnight, she says we all have it in us to go the distance. Now, she has set a new course for helping others. Sheridan hopes to motivate women to get moving because she is living proof it’s never too late to start.

I ran my first marathon to celebrate my 40th birthday but haven’t run much since. Now, after Molly joined me recently on The Women’s Eye Radio, I realized I needed more adventure in my life and signed up for my first race in ten years! Here is an excerpt from our conversation…

TWE: Why do this? Have you always been a “warrior goddess?”

MOLLY: “Why?” is an excellent question. I get asked that a lot. When I was 48, my girlfriend called me and asked, “Do you want to run a marathon?” and I said, “Ewww, it’s too sweaty. Why would I? The answer is no.” I think I said no like ten times. I didn’t have a why to do it. But I was haunted all night with her question.

I was asking myself, “What am I doing for exercise and what am I doing to be fit?” I was a lethargic mother of three working full-time. I realized I needed to explore my fitness. I was a mess. So I called her back the next day and asked her what is the fun part? Ha! Now the reason I do this is for adventure, fun and being fit.

MOLLY: After that first marathon, a little voice kept wondering how far could I go? I was shocked when I completed the marathon because I had no athletic background. I’m pretty wimpy really!

TWE: What was going in your life at the time?

MOLLY: I was going through a divorce. Both of my daughters were going to college. I love being a mother but that job was ending. Even though I worked, I was at a point wondering “what am I capable of?” I wanted to know what to do in my second act. I found a lot of those answers running.

TWE: What’s going on with you when you run?

MOLLY: Freedom of movement does a lot of things. It’s an incredible thing, and that’s why I encourage people, women especially, to walk, power walk, run. It doesn’t matter how fast or slow, as long as you’re moving.

“It awakens your mind, your spirit, and your heart. It’s almost like a meditation when I’m out there. I say just slowly adapt your body to what it really does well and that is move.”

TWE: Can anybody do this?

MOLLY: Yes. But you have to want it.

TWE: Is it all mental?

MOLLY: Yes, I think 90% is mental. It’s about focusing on the movement.

TWE: Shortly after you started training for your first marathon, you got an injury. What did the doctor tell you?

MOLLY: I had no running experience. Not knowing what I was doing, and with no one to train me, my ankle was hurting. I had gotten a stress fracture five weeks into training.

The doctor said you’re done and asked, “How old are you? You are too old to be running.” It was such a shock to hear someone say that; it hit me right in the gut. How could he say that when I had this goal!

But I researched and learned that you can run in a pool to help stress fractures. I did that for six weeks and from that point forward became very focused on listening to my body.

When I completed the marathon, I sent that doctor a photo and asked him not to tell people they are too old to accomplish a goal!

TWE: So what was next once you ran the marathon?

MOLLY: I decided to run a 50K which is 31 miles. I didn’t tell anyone because I didn’t want to hear any negative feedback. It was a personal thing. I just wanted to see if I could do it. There were so many changes that running brought; I started feeling better and stronger.

“I now had calf muscles! I had clarity and wasn’t lethargic in the afternoon where I wanted to just flop on the couch.It changed my whole outlook.”

TWE: Did you have more self-confidence?

TWE: In these ultra races, you have to overcome blisters, weight loss, throwing up, hallucinating and snakes. Did you know that going in?

MOLLY: Not really. It’s cool though. You are constantly dealing with obstacles during a 100-mile run and overcoming Plan A to Plan B to get to the finish line. 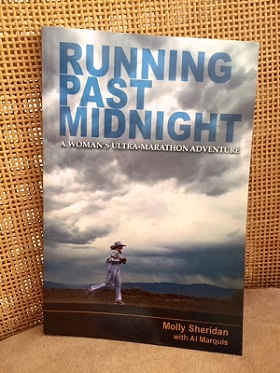 TWE: You ran 150 miles in the Sahara Desert? That is remarkable.

MOLLY: I decided to tackle the toughest foot races on the planet, including the Marathon Des Sables, a 7-day event. I also did the Badwater Ultramarathon in Death Valley.

It starts at the lowest point in the U.S. and goes to the highest, Mt. Whitney. It took me 48 hours non-stop!

TWE: I can’t believe you did that. In your book, Running Past Midnight, there is a great photo of you in an ice bath!! After you finished Badwater, how hot was it?

MOLLY: Badwater was 124-degrees and 135-miles non-stop. That was the first time I ever ran that distance in that heat. That was one of the toughest things I’ve ever done.

TWE: Also in your book, you talk about running the first race in the Himalayas and were the first American woman to finish!

MOLLY: Yes. I’ve run in the Himalayas five times. The race was located on the northern India, China and Pakistan border. It was very difficult to get to. The Indian government wrote us a letter and said it was humanly impossible to run that distance at that altitude. It was so incredible to prove them wrong.

“It can be done. It was such a beautiful part of the world. But we did come face-to-face with terrorists, snowstorms and a tent full of spiders.”

MOLLY: That’s okay; I don’t mind that. I guess you have to be a little nuts to do it but I’d rather be a nut than sitting on the couch watching television.

TWE: You say “moving through space” is like a mantra. You also think of strong women when you run. Why?

MOLLY: Because I am one! Ha. Also because being a woman, I sometimes think we have to push a little harder and do things that are outrageously tough. I have five sisters, girlfriends and my two daughters.

I love that strength and support I get from them, and when I’m out there, I call their names out. My mother passed away a couple of years ago. When I think of her, it just brings me strength. 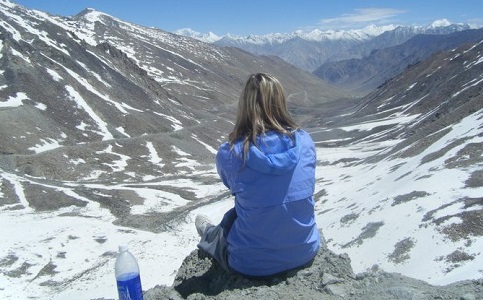 TWE: Now your focus is on helping people, primarily women, through your company Desert Sky Adventures. Why?

MOLLY: Desert Sky Adventures is about helping others to walk and run for health and adventure. I understand that some people would never do what I do, but my whole purpose as to why I’m on the planet is to help people just run a mile, or two, or three. Or walk. It’s so important to exercise and move through space; it helps so many things. That’s my platform.

Yes, I go long distances and a lot of people don’t want to do that, but I do believe there are people out there who do want to start and they feel like they are too old, too heavy or don’t have time. But it’s really the message of moving. 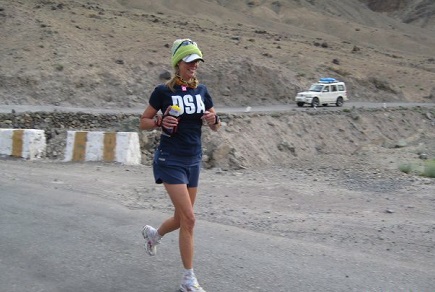 TWE: Do you ever run out of races to run?

MOLLY: There are endless races around the world. I get to see the world! Western States 100 is the most prestigious in the West and so popular. Thousands try to get into it every year by lottery. I’ve been trying for five years and I just learned that I finally got accepted!

TWE: Congratulations to you, Molly. Well deserved. We’ll be following you as you tackle yet another difficult race. And I’ll be thinking of you when I run the Summerlin Half Marathon in April in Las Vegas thanks to your motivation!

You can listen to Molly’s interview here on The Women’s Eye Radio Show.