Journalist Lu Ann Cahn should be called Lu Ann CAN. This reporter, mom and cancer survivor says her life was stuck. Her solution to getting unstuck? Every day for one year she did something she had never done before.

“As I faced fears, like singing in public, I took the courage that I gained from other experiences like that and realized I could apply it to other areas of my life.”  Lu Ann Cahn

That year of firsts became a book, I Dare Me: How I Rebooted and Recharged My Life Doing Something New Every Day.  I dared her to join me recently on The Women’s Eye Radio Show after her 30 Dares in 30 Days Tour…

STACEY: You are probably the kid who played Truth or Dare. Did you always pick Truth or did you pick Dare?

LU ANN: I don’t know. I think we are all more daring as kids than we are as adults. As adults I think we start narrowing what we do and we stop doing new things.

STACEY: Why do you think that is? We seem more comfortable in routines.

LU ANN: We just get really comfortable. In our careers we get really good at what we do; we want to stay in that safe place. That certainly happened to me.

I had been a television news reporter from the time I was almost 18-years-old. When I was 53, everything changed. And I did not want to change. I felt old, out of step and stuck. I was very unhappy for about a year.

STACEY: Anyone looking at your life and career would think you were doing really well and wonder how would you not be in a good place?

“Because I am a long time breast cancer and kidney cancer survivor, I knew this was not good for my head or my health. I had to fix it. I felt there was an urgency to fix it because life is so precious.”

It was really my daughter who came home from Los Angeles and said, “What the heck is wrong with you? You have to fix this!” She challenged me to do new things.

STACEY: What was going on that year? Were you depressed?

LU ANN: In 2009, the economy was tanking and where I was working, a lot of people were leaving their jobs, downsizing, and resources were being taken away. As a communicator and journalist, I was being asked to tweet.

I use so much social media today that I cannot believe I rejected it, but I did. I’d come a long way in my job, which was even before computers, but I just didn’t want to adapt and move forward in this direction. 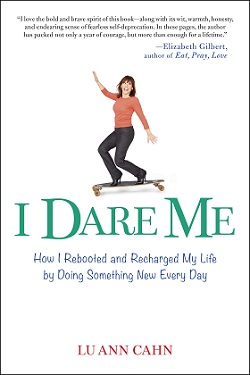 STACEY: Why do you think you did not want to adapt?

LU ANN: I think probably because I had many successful years and won many awards. I got comfortable doing things my way and that was the only way. I was entrenched in my habits.

We can get to that point. When change started happening all around me, I wanted to close my eyes and pretend it wasn’t happening. I wanted to go back, but you can’t.

STACEY: Was it fear?

LU ANN: I was definitely fearful of the tidal wave of change that was happening. I started shutting down and saying no to everything. I tell people now when they ask how to get unstuck, you have to start saying yes to open up your life again.

STACEY: You are saying you should say “yes” to anything and everything?

LU ANN: I think that if your life is great, “Carry on girl!” But if you are stuck, one of the best ways is to start doing new things, take risks, large and small.

I like to say life is a buffet and we start choosing from the very smallest section of the buffet when there is so much out there and you don’t realize it.

STACEY: Do you remember that first thing you said “yes” to?

LU ANN: I said, “Who can come up with something new every single day for a year?” My daughter and I started making a list. One of the things was “eating dessert all day.” By the way, that was a really bad idea, even though it sounded good.

“I planted my first herb garden. I bought my first lottery ticket. I learned to bake a cake from scratch. These are things absolutely anybody can do.”

These are just things I had never done before, first-time experiences. But the very very first thing I did was the Polar Bear Plunge, January 1, 2010.

STACEY: Are you nuts?

LU ANN: I’m just like you. I look at that telecast every year watching people run into the ocean. I said, “People are crazy. I would never do that!” Intuitively I understood that I had to prove to myself  to do something way out of my comfort zone. When I came out, I felt pretty exhilarated.

STACEY: When did you start blogging about it?

Lu Ann speaking at the PECO Network of Exelon Women/4-29-15
STACEY: So blogging got you involved in a new way of communicating?

STACEY: What is an example of something that started to change when you started to do something new every single day?

LU ANN: It really happened cumulatively. As I faced fears, like singing in public, I took the courage that I gained from other experiences like that and realized I could apply it to other areas of my life.

“I did silly things like eating a scorpion. I did a primal scream and walked my dog around the block backwards one day. I also got the courage to go back to school. I learned algebra all over again and took the GRE.”

STACEY: You got your Masters Degree at age 56. Did your life change dramatically then?

LU ANN: I’d been working on my Masters and started teaching. I met people I would not have met. Life opened up. I realized that every time you start something for the first time, to me, it feels like you are throwing a pebble in the cosmic universal pond. You create a ripple of energy and possibilities that weren’t possible before.

STACEY: With your job as news reporter, how did you find the time to do something new everyday?

LU ANN: A lot of the things I did just took a few minutes because I didn’t have the time. Planting an herb garden took ten minutes. Buying a lottery ticket took two minutes. An attitude adjustment doesn’t take any time.

A couple of days I gave out hugs, treated everyone like they were in a 5 star hotel, got through a whole day without cursing and tried to learn the alphabet backwards.

STACEY: Tell me about the goal for your 30 dares in 30 days.

LU ANN: I went through a huge transition and transformation myself when I went on this journey. I left my 40-year-career at broadcast news, and I am going to be working at Temple University in Philadelphia to help launch communication students in their careers.

I knew I had some time before starting at Temple. So many readers all over the country had written about their dares and adventures and I wanted to meet them.

I wanted to share dares and reconnect with friends and family. So, I looked at a map and put dots where all these people are and that’s how I came up with 30 dares in 30 cities in 30 days.

STACEY: Are you are almost a therapist?

LU ANN: I just know that it works. I enjoy inspiring other people. Because I am a cancer survivor twice, and have seen a lot of life because of my career, I enjoy sharing what I learned.

“This journey was a wonderful way to share with other people, to get them excited about opening up their lives. Many people were feeling stuck.”

A woman realtor from Joplin, Missouri wrote to me that January was always the worst month for her.After she read my book and started doing new things every day in January, she had the best month she ever had for her business. She felt like she was relating to the world in a very different way.

Lu Ann talks about healincomfort recovery/healincomfort.com 4/11/15
STACEY: You talked about being a cancer survivor, twice. How was that and did you have an evolution of how you dealt with it?

LU ANN: Anyone that has had cancer will tell you that you look at life differently. You live life a little more urgently. I am a 23-year-breast cancer survivor. I had a mastectomy, chemotherapy, breast reconstruction and then, ten years later, I was diagnosed with kidney cancer and had part of my kidney removed.

Before that my entire large intestine was removed because of ulcerative colitis. I should be jumping up and down every day just to be here. I think any one who has faced a major crisis or illness understands. I wasn’t happy jumping out of bed and embracing the day; I knew I had to fix that.

“We take time for granted. We really have to practice living every day, living in the moment, playing and laughing. Studies show that all work and no play not only makes us boring, but less productive and less creative.”

If you take time to play and try to something from your childhood like I did, climb a tree, do chalk art on the driveway, do a cartwheel, catch fireflies, that can make you happy. It did me.

STACEY: If someone is really scared to dare themselves to do something new, how do you get them through it?

LUANN: First, tell everyone you are going to do it. Others may say, “I want to go with you.” Second, it helps if you focus on that. It holds you accountable. I say, “Wear your dare. Wear it!”

STACEY: Lu Ann, thank you. The book is I Dare Me: How I Rebooted and Recharged My Life by Doing Something New Every Day.  I am definitely ready for a new dare.  In fact, I have one all lined up, running in the Las Vegas Marathon in November, and I can’t wait!

TOP 10: Kristin Davis on Battling to Save the Elephants with her Documentary ‘Gardeners of Eden’
Next Post: TOP 10: Moms March to Demand End to Police Brutality, Racial Injustice