Being the only child of legendary comedian George Carlin wasn’t all laughs. 52-year-old Kelly Carlin makes that point very clear in “A Carlin Home Companion,” her one-woman show that tackles the good, the bad and even the ugly moments of living with a famous father.

“I’m very committed to the woman’s journey, women finding their voice, finding their power and embracing their authenticity. That’s what excites me.”   Kelly Carlin

The theatrical production, written by Kelly and directed by veteran comedian Paul Provenza, explores four decades of “growing up Carlin” with irreverence and honesty.

Using classic video footage as a backdrop, she tells tales of her parents’ addictions, their nomadic lifestyle, relationship struggles, cancer and ultimately, losing her mother, Brenda, 15-years-ago and her father in 2008.

I worked with Kelly’s husband, Bob, a Director of Photography, over 20 years ago, and that is how I first met her. I’ve always wanted to see her show, and finally got the chance on the final night of her critically-praised run at the Falcon Theatre in Burbank, California.

Before taking the stage one last time, I spoke with Kelly in her dressing room filled with photos of her parents. Kelly talked about panic attacks, changing the world, and being the next Oprah….

EYE: This is the final night of your show “A Carlin Home Companion.” Is it a little bittersweet?

KELLY: Absolutely. I’m feeling satiated about it all. I started all of this about four years ago. At one time I thought I was done with it. I had done comedy festivals, playhouse productions…but I didn’t want to be identified with my dad all the time.

Then, Paul Provenza said to me, “You haven’t even scratched the surface.” I then got into a solo show festival in the fall of 2013, got a touring agent and a book deal.

This whole experience has been amazing. I feel like an actor now. I’ve finally gotten some real hours on stage; I know who I am and I know what to do now. I’m also chomping on the bit and ready to go to the next level.

EYE: Is there something you were searching for as your show evolved?

KELLY: Yes, a sense of myself. I didn’t have a sense of self. I was always there to serve my parents’ addictions as a child. That flowed right into my adult years, which didn’t bode well for relationships and my self-care in any way.

It’s really been only the last 15 years that I figured out how to take care of myself and find my way. Through this process, with all the anxiety–I’m a person who has had an anxiety disorder my whole life–I’ve had to learn to navigate my own mind and see all the obstacles in front of myself.

One night, I couldn’t breathe on stage. I was having a panic attack. I made it through the show but worried about it the next night, and just said to myself, “What if this was just easy and I allowed for this to be easy?” And all the anxiety drained out of my body.

I had an amazing show! It’s all about what we put in our own way. That is what my show is all about.

EYE: Are you doing all of this for yourself, or to reach others as well?

KELLY: This has always been about wanting to tell my story to help other people who have gone through what I’ve gone through. No one else’s dad is George Carlin, but I really see my family as a typical American family who dealt with dysfunction, loss, disease, insane choices, growing up through the counter culture and the changes that followed.

“I am really very touched by people who I meet after the show who say they have similar situations, whatever they are.”

There was a woman who told me, “I have heart and lung issues and haven’t talked to my daughter about it, but I’m going home tonight to talk to her about it.”

EYE: How do you want to help change the world?

KELLY: I want people to understand that its okay to be human; that we all have crazy families; and we are all unsure about who we are.

We must get out of our way, stop trying to live as something we are pretending to be and just accept who we truly are. Anything is truly possible even in the most screwed up circumstances.

And for me, it’s always about our humanity touching each other, humans meeting humans and taking off the faÃ§ade and stop pretending that we all have to be perfect. That’s what I try to show on stage.

EYE: What is the toughest part in telling your story?

KELLY: I’ve done it so many times, but I think emotionally, the hardest part is getting connected to the material because I’ve processed it all personally. When I’m on stage, I know what’s coming next and I know the part about my mother’s death is coming next, and I think to myself, “My mother has to die again tonight?”

It’s this horrific thing and then as a performer I have to walk through it one more time. 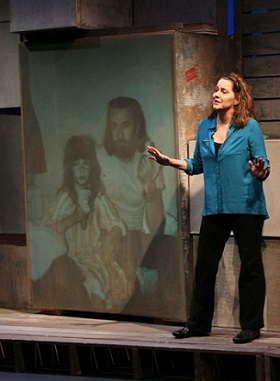 EYE: Is your message that you are not alone?

KELLY: Yes. I was an only child so I felt really alone and I couldn’t talk to anyone about my parents. It is the sense that I’m not alone and you’re not alone, and we’ll get through it together as long as we remember that we can say these things to each other.

EYE: What is your advice to others who feel they are alone in their struggles?

KELLY: Share your pain and your fear. Don’t be afraid to admit that you don’t know things. Find a community of like-minded people who you feel safe with in talking about issues. I walked around pretending I was okay. It was my game to say, “ Oh, I’m okay, look at me, I’m fine!”

But I wasn’t okay, and I wish if I had just said I feel like a crazy person, I would have had years removed from my process. But it’s really scary to do that. However, there is such liberation when you do that. So now I can make a practice of it.

EYE: Do you have any regrets now about sharing personal stories about George Carlin, warts-and-all?

KELLY: None, zero. I had to overcome that because my dad was a very private person, and he liked to have a faÃ§ade because he didn’t talk about his private life at all. He had a memoir written but we had to wait until he died in order to publish it.

He could have published it while he was alive, but he didn’t, and I thought that was very telling of my dad. I think he had personal shame around certain things. I stopped doing some stories in my first one-woman show, because there were topics that bothered my dad.

I say in my show now, “I wish he had seen it because the few times I had done it, he would have seen the audience always loved him more at the end than they did at the beginning.” I get that every night when I meet the audience and they say, “He was human!”

“I think we have a big problem with that in our culture. We love to put people up on a pedestal and then tear them down so that they become human, and guess what? They were human to begin with!”

EYE: Would your story have been easier to tell if your dad wasn’t George Carlin?

KELLY: I get people saying she’s riding on his coattails. But I say see the show. Yes, I wanted to tell my story no matter that my father happens to be George Carlin.

I didn’t pick doing this because of my famous dad; I have a story to tell, a woman’s story. It if gets people in the seats and then they get the impact of it, then yea! I say, “They come for the George, and they stay for the Kelly.” 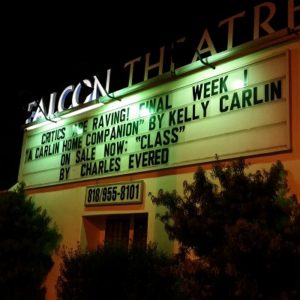 EYE: I like to think your parents have the best seat in the house as they watch you perform. Is your show also a lesson in grief?

KELLY: Yes. It’s been 15 years since I lost my mom, and seven since I lost dad. It’s about how we deal with this, especially this generation because we are now at that age where we are losing our parents.

The strange thing is there are some things we can’t do until our parents are gone. When your parents die, you are so heartbroken–I grieved for two years after my mom died and I could barely function–but there was some part of me that was liberated also. That’s part of it and it’s really okay.

We evolve. I feel like the work I do is very different than my dad’s, but when you see me on stage, you’ll see moments of my dad coming through. I’m a storyteller, I’m on a stage, I’m a monologist–those are the similarities, but that’s where it ends. I’ve talked about this with my friend Rain Pryor, Richard’s daughter.

“As women, we believe we are taking our father’s art form to a different level, and we’re going into territory that they wouldn’t go into because they are not women.”

That’s the privilege of what I get to do now and that’s the work I want to do going forward. I’m very committed to the woman’s journey, women finding their voice, finding their power and embracing their authenticity. That’s what excites me. 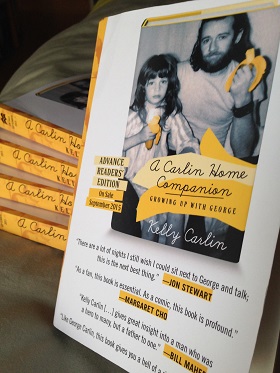 EYE: What is next for the “Carlin Home Companion” star?

KELLY: I’ll be touring the show in the fall, winter and spring for my book! The whole purpose was to get a book deal. I want to be an author because I love writing.

I really felt like I got to tell my story. I’m also a keynote speaker so now I want to be the irreverent, funny Oprah!

EYE: You have said you wanted to share with your father’s fans so they could have one last time with him. But what emerged is a daughter who found her own voice, on her own terms. Do you think you have finally found your place in the world?

KELLY: Yes, I think I knew where it was 10-years-ago, but I needed to get this story out of my body and into the ether before I could do this other bigger work. Who knows why? But that was the order it had to come for me.

What’s fun now is as I look in my computer, I have 50 essays ready to go that I kept because I had to get my book done. I wanted to tell this story first and then I could be done with my origin story. And now move on and out into the world!

EYE: Do you think your parents would be proud of you?

EYE: Well, your show was a funny, emotional, well-written and masterful retelling of a very personal true story. Can’t wait to read your book “A Carlin Home Companion” in September. Thanks, Kelly, and hope to have you on the radio show!

Kelly hosts The Kelly Carlin Show on Sirius XM and Waking from the American Dream on SModcast Network.