If you love photographs that take you to new corners of the world to meet fascinating people like we do, you will want to pick up a copy of Paola Gianturco’s beautiful book, Grandmother Power: A Global Phenomenon. Paola is a renowned photographer who has made a career of documenting women’s lives. This time her subjects are over 100 grandmothers in over 15 countries.

“I was on five continents and everywhere I saw the same thing–energetic, effective grandmothers doing important work.”  Paola Gianturco

Paola’s book has won four first place literary awards; been turned into a museum exhibit at the Grand Rapids Public Museum; and was the inspiration for a piece by composer Phyllis Chen commissioned by the Baryshnikov Arts Center in New York City.

STACEY: Whistler once painted his mother in a grandmotherly pose in a rocking chair looking very subdued. How do you think would Whistler paint a grandmother now?

PAOLA: I think he would have to paint women going to the gym and running businesses. Half of all the grandmothers in the United States today aren’t even 65 yet. They are too young to retire.

Today’s grandmother is very different. She is younger than she’s ever been. She is roughly between 45 and 64, better educated, very healthy and has a great work experience.

Since many of them are Baby Boomers who came of age in the 60’s, they know they can change the world because they did. There are many effective activist grandmothers.

STACEY: So many of your photos are magnificent. They seem to come to life. How long have you been doing this now?

PAOLA: This is a second career for me. I was a business woman and not a professional photographer or writer. I worked for 35 years in marketing and corporate communications in the business side of those businesses.

“I thought I would take a one year sabbatical and I never went back. It was during that one year that I began photographing women and doing books about women. That was that. And this is book number five.”

STACEY: Were you always someone who took pictures and felt comfortable behind a camera?

PAOLA: Yes. My father put a camera in my hands when I was eight-years-old. I never had a class but I quickly took some when I realized that I was going to be serious about this.

STACEY: You must have a natural ability. You have that good eye for that great photograph!

PAOLA: I stood behind many good photographers who worked for the agencies and businesses I worked with, so I had lots of experience behind that camera even though I wasn’t doing the actual shooting.

STACEY: What feeling comes over you when you take that picture that captures the perfect image? Is that something you think about?

PAOLA: I think very hard about who it is that I am taking the picture of and how well the picture represents the person I have come to know. I do the interviews before I do the photographs so that I have a strong sense of who these women are and what their lives are like before I begin to take the pictures.

STACEY: What was your first book, the book you did during your sabbatical?

PAOLA: The first book was In Her Hands, Craftswomen Changing the World. It was about women artisans in twelve countries on four continents, all of whom were sending their children to school with the money they earned from making handicrafts and selling them.

STACEY: You are not someone who is adverse to travel?

PAOLA: There is a reason I can do this work. As a result of having done work all over the world, literally, I started with one million frequent flyer miles on United. I could go virtually anywhere for free and stay anywhere.

My husband had two million additional miles which he gave me because he was excited about the work I was doing. So I was able to do all of these projects relatively inexpensively.

“It then makes it possible to donate the other royalties from these books. They are all philanthropic projects to organizations that are working on the issues in the books.”

STACEY: You are literally not making a dime?

PAOLA: No. But I don’t have to pay anything to fly or to stay in hotels. I pay for my own meals, but I would have to do that if I were home. Thanks to shooting digitally–it used to be very expensive to buy lots of film and then have to process it–it has really made a difference.

STACEY: What was the inspiration for this latest book, Grandmother Power?

PAOLA: I was working in Kenya and interviewing women there who were actually part of a women’s water project in rural Kenya. I asked them, as I often do in an informal way, how many children they had.

“Suddenly I realized they were really telling me that their children died from AIDS and they were raising their grandchildren.”

STACEY: How did that strike you?

PAOLA: I was struck by the sadness that represented. I got tears in my eyes. What do you say to give each other comfort?

These women were not strong enough to carry water on their heads, nor were they able enough to work or earn money. They were very poor. Suddenly they had more than a household of very young children all over again, just when they thought they were at the time when they could relax.

STACEY: Of course these women would take these children in, right?

This was in 2006. When I came back, I thought the future of this continent rests in the hands of these grandmothers.

STACEY: So, that is what you wanted to bring out in your book?

PAOLA: I wanted to bring these women’s voices to people’s attention. I was on five continents and everywhere I saw the same thing–energetic, effective grandmothers doing important work.

PAOLA: The attributes that were threaded through all the stories are really values and behaviors that I think are very important to teach young people.They include generosity, collaboration, patience, perseverance and resilience.

STACEY: Who were a couple of the 120 outstanding women you met on this five-year journey?

PAOLA: There were some Indian grandmothers who went to school at the Barefoot College in Rajasthan, India. After six months they learned to become solar engineers. They returned to their villages and installed solar panels on the roofs of their huts.

Everything changed. Midwives could see to deliver babies at night. Children no longer got black lung disease from studying by kerosene lanterns. They can charge cell phones which means they can do electronic banking. They have refrigerators that keep their food bacteria free.

By now there are ten thousand hospitals in India that have been solar electrified by grandmothers. The United Nations got wind of this huge success and began sending grandmothers from all over the global south to study with these same grandmothers who went back to teach at Barefoot College.

“Now there are at least 35,000 households in 24 countries in all over the developing world that have been electrified by grandmothers.”

STACEY: Now, I understand, there are grannies at Israeli checkpoints?

PAOLA: Yes. Israeli-Jewish grandmothers are monitoring checkpoints to quell and stop human rights abuse against the Palestinians. People are often trapped in the checkpoints for hours and hours without explanation. Sometimes women give birth there; many miscarry and many die.

They began going two-by-two to the checkpoints monitoring soldiers, which was very courageous and controversial because some of them had soldiers in their own family. They issued reports daily to the Knesset, the media, journalists and internet. They have gained respect.

STACEY: Amazing! Activist grannies are all over the world! It reminds me of the Raging Grannies?

PAOLA: There are 60 gaggles of Raging Grannies in five countries. In fact, I photographed the San Francisco Raging Grannie Action League who do great work.

They even play songs that are pointed to gain awareness of issues they think either will benefit or work to the detriment of their grandchildren. They are terrific and fun.

STACEY: Are you trying to unite these groups?

PAOLA: It really surprised me how many grandmother groups there are and that we may not be aware of. I am also hoping that people will start their own–join, network with or support other groups.

If one goes to www.globalgrandmotherpower.com, the section that is Show Your Power lists all the grandmother groups I know about in some 33 countries all over the world.

I hope if I am missing some groups, people will let me know and I will add them. 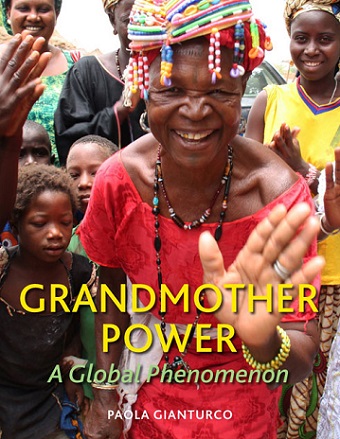 STACEY: Is there one image or photo that represents who you are as a documentary photographer?

PAOLA: I suppose the cover of the book. It’s the photograph of a Senegalese grandmother. She and I were dancing with all the grandmothers in her grandmother group. They danced me to the car.

I photographed her through the window of the car, just as we were about to leave. You just never know when you are going to take a photograph that is that iconic.

It just makes me smile every time I see it. She has so much joy and so much energy that really embodied what I discovered everywhere.

STACEY: Can you tell me where the proceeds for this book are going to?

PAOLA: The publisher is paying 100% of my author royalties to the Stephen Lewis Foundation in Toronto who grants funds to groups of grandmothers in 15 African countries who are raising children orphaned by AIDS.

Everyone who bought (or will buy) a copy of the book is contributing importantly to their work.

STACEY: Thank you for bringing this issue of grandmother power to the forefront. I’m sure many people will be thanking you.

PAOLA: I hope many people will get involved. It takes grandmothers and grandothers to provide hope and possibility for our world. I have presented 55 slide lectures throughout the U.S. and Canada to let people know about the power of grandmothers.

I know of two groups inspired by the project that are working on health issues: one, a group of U.S. volunteer nurses who are teaching grandmothers about health and nutrition in rural Uganda and another educating the public about the need for vaccinations.

STACEY: You have the ball rolling, Paola! Thank you so much for taking the time to talk. To get the book and see the photos go to www.paolagianturco.com.