Bogi Lateiner is truly unique. After graduating college in three years, with a double major in pre-law and women’s studies, she decided what she really wanted to do was fix cars. She entered tech school, broke barriers and opened her own business, 180 Degrees Automotive, in Phoenix, AZ.

“I wanted to pass on some of the confidence I learned about cars and fixing cars, which boosted my confidence in life and my ability to feel like I could tackle anything.”  Bogi Lateiner

It’s a full service auto repair shop with a great reputation and staffed almost entirely by women, which we absolutely love. Bogi is all about empowerment and making dreams come true. Here is an excerpt of my conversation with her on TWE Radio…

EYE: In a male dominated field, you break barriers as a successful car repair shop owner, empower women through workshop classes and you are the host of a reality show, All Girls Garage on Velocity. You must be exhausted!

BOGI: I am, but I love what I do. That keeps me going.

EYE: How did you end up on that path?

BOGI: I originally wanted to work with domestic violence victims and I did rape crisis counseling in college. I thought I was going to go into law and pursue that direction. But, I was really missing the tangible, fixing something broken and seeing it go down the road.

I bought my first car when I was 16 years old. It was a piece of junk. It was a 1974 Volkswagen bug and, like they do, it broke down a lot. Every time I brought it in for service, I really hated the way I felt, like I had a big target on my head, I was vulnerable. It was because I didn’t know anything about cars. I started learning just for me and I fell in love with it.

EYE: What do you mean by “learning?”

BOGI: I started reading car magazines. That fueled my fire. The only time you saw women in car magazines, a while back, they were wearing high heels and bikinis, draped over a car.

That fueled my fire to get involved. So I enrolled in high school auto shop. I convinced my shop teacher to rebuild my bug as a shop project.

It was neat, fun. I found a couple of great mentors who weren’t bothered by the fact that I was a woman. They were willing to take me under their wing and teach me everything that they knew. I thought I was doing it for me, not as a career. So, I went off to college and did all of that. I wrapped around back to it.

EYE: You enrolled in tech school and that was pretty eye-opening, wasn’t it?

BOGI: It was. I was a good 4 or 5 years older than pretty much everybody in the school. There were 3,000 men and 7 women. I was kind of an odd ball on several different levels: I’d gone to college; I was older; I was a woman.

I had all these things that isolated me. I learned so much about myself and about the world. We all grow up in a bubble knowing what we know. It was a whole new world I was getting exposed to.

EYE: You said you“ wanted to fix the world by fixing cars.” What made you decide that this wasn’t just a career but that it would be important to other women too?

BOGI: My original vision was to put in all my years as a technician and then open up a training facility to work with domestic violence victims, train them in a skill and get them on their own two feet. That hasn’t really happened.

What it’s evolved into is creating opportunities for other women to become technicians. Our apprenticeships are reserved for women. It’s really hard for women to get their first job in the industry because a lot of people aren’t open to that idea.

Our mission was to create a shop that everyone, male and female, would be comfortable bringing in their car.

I wanted to pass on some of the confidence I learned about cars and fixing cars, which boosted my confidence in life and my ability to feel like I could tackle anything. The car care classes I teach are for everyday women who just want to know a little something more. It’s more about empowerment than it is about cars.

EYE: What drew me to your shop was that you are a woman-owned auto shop, which I’m sure you hear from many people.

BOGI: Yes, but they wouldn’t keep coming back if we don’t also provide a fantastic service. People seem to feel more comfortable dealing with a woman at the front counter knowing there are women technicians in the back. I just think businesses in general are so much stronger when they are diverse. That is reflected in our success, the diversity of our team.

EYE: What have you learned from the women who attend your free classes?

BOGI: Attendees are 8 to 80 years old. Older women tell me their husbands have died. Because their husband always took care of the car, now they don’t know what to do. Younger kids getting their licenses are motivated to know more. It always surprises me how basic the knowledge is that is needed.

As a teacher, I want to pack all this valuable information in and then someone wants to know how to check tire pressure. Basics, that’s what so many want to know. Surprisingly, it’s not all women. It’s men who don’t know anything about cars these days. I think our male customers like coming to us because they don’t have to pretend they know what they are talking about.

They don’t have that machismo thing where they have to go into a shop owned by a guy and admit they don’t know anything.

EYE: Do the stereotypes you encountered still exist, and if so, at what level?

BOGI:I think it’s changing. Change never happens as quickly as you want it to. I see the younger generation of technicians are more open to working with women. They’ve been exposed to more.

I now travel the country teaching and working with shop owners and now I hear, “I would totally hire a woman!” versus when I was looking for a job,”Nuh, I’m not hiring a girl!” I think there is a shift in the right direction.

EYE: Your shop is about more than car repair. You take customer service very seriously. It has snacks, coffee, toys for the kids who might up being there for more than hour with their parents, shuttle service. You even have a small art gallery for local artists to show their work. Why is all that so important, especially the art gallery?

BOGI: Really, it’s for selfish reasons. I love art. I love supporting local artists. With the amount of time I spend at work, it was how to make this business more enjoyable for me and how do I leverage it to support local artists and be part of the community?

When you are part of the community and support other businesses and local artists, they support you too. It turns out to be a fantastic marketing tool and a win-win. It is good for the customers and us.

EYE: What do you do in your speaking engagements?

I encourage people to dig deep into what are their desires and passions in life. No matter if you are in business for yourself or working a job 9-5, when the going gets rough, you’ve got to have something to get out of bed for that makes it worth going through the struggle.

EYE: Tell us about co-hosting the television show, All Girls Garage on the Velocity Network.

BOGI: All Girls Garage is myself and two other women who own a shop together and work on a motorcycle or car or truck for half an hour. We do a combination restoration work, repairs or modifications educating viewers as much as we can. 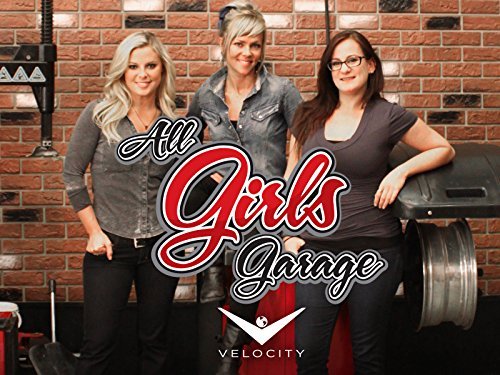 EYE: I know you started out “to fix the world.” Do you feel like you’re making a difference?

BOGI: I do. Sometimes it’s hard to see the forest through the trees when you are in the daily struggle. It’s easy to forget the impact you are making. Of course my inner 16 year old still wishes I could do bigger and more.

When I get letters from other women in the industry or from fathers saying their young daughters are watching car shows and now they want to grow up to be like me, it make makes a big difference.

EYE: Do you get a lot of young girls reaching out to you?

BOGI: I do. And, that’s the main reason I do the show. I love hearing those stories about young girls, 5 year olds, want to play with the car with their dads in the garage.

EYE: Have there been challenges you have faced along the way?

BOGI: Always, but that’s about keeping perspective. When you’re in it, all you see is the struggle. It’s remembering to pull yourself out of it, to step back.

I have to look at what I created, look how far I’ve come. It’s very easy to get caught up in the day-to-day minutia, beat yourself up and feel nothing is working the way you want it to. Being a business owner, even an adult, is a roller coaster.

EYE: Does any one accomplishment stand out for you?

BOGI: I think it’s starting the business. Having the courage on that fateful day in November, 2006, when, teary-eyed and hand shaking, I turned in my resignation at the dealership. “I’m doing this. I’m taking the leap! Let’s go.” We moved locations four times! I never ever want to move again.

EYE: Your real name is Sarah. Where does the name, Bogi, come from?

BOGI: I’ve had the nickname that my friends gave me when I was 16. I was a rotary exchange student in Hungary and the word “sarah” sounds like a swear word in Hungarian. Bogi is short for boglÃ¡rka, which is a type of flower. Bogi by itself means beetle, which is of course the car that started all of this.

EYE: Thanks, Bogi! I want to remind people to find you at 180automotive.com and to watch All Girls Garage on Velocity. Thank you for your insights and all that you have made possible for women.