A BRAND NEW conversation on The Women’s Eye Radio with host Stacey Gualandi and Sally Colon-Petree, Dream On Productions founder and the director of Women Like Us. Three Journeys. One Mission. To Change the World. 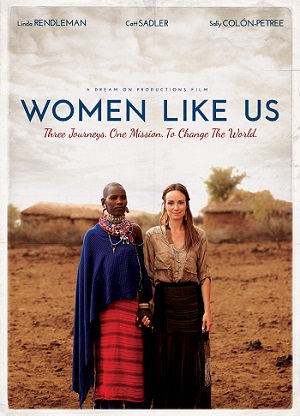 The self-taught filmmaker has worn many hats – host, actress, singer, and producer — but now she has found her life’s mission: to shed light on what is happening to women around the world.

Her debut documentary, Women Like Us, is a labor of love that took the mother of two girls to Africa and all over the US. She filmed “unimaginable social injustices young women face,” including sex trafficking, female genital mutilation, teen suicide, poverty and bullying. The timing of the film couldn’t be more perfect in the current #MeToo/Times Up climate.

I met Colon-Petree late last year at a Las Vegas screening of Women Like Us I hosted with Deluxe Version Magazine. It was an opportunity to hear her personal journey and to learn what I – and all of us can do – to make a difference for women across the globe.  Now anyone can host these “Empowerment Forums” to promote the film and inspire a call to action.

Listen as Colon-Petree candidly talks to me about her mother’s inspiration; how she overcame trauma; how she “found herself” while filming; and why she went to shoot her next doc in post-Hurricane Maria Puerto Rico.

“I want people to be aware, not to live in fear,” says Colon-Petree.

To find out how you can host a screening, go to www.womenlikeusdocumentary.com.

Listen to more TWE Interviews on:

The Women’s Eye Radio on iTunes.