TWE 247: Authors Sharlee Jeter and Dr. Sampson Davis On Unleashing “the Stuff” Within Us

TWE RADIO: Sharlee Jeter and Dr. Sampson Davis On Unleashing “the Stuff” Within Us

The STUFF–Unlock Your Power To Overcome Challenges, Soar and Succeed by Sharlee Jeter and Dr. Sampson Davis

Don’t miss a BRAND NEW episode of The Women’s Eye Radio with Stacey Gualandi! Authors Sharlee Jeter and Dr. Sampson Davis talk about their first collaboration, The STUFF–Unlock Your Power To Overcome Challenges, Soar and Succeed.

Sharlee Jeter is the President of the Turn 2 Foundation, a non-profit formed by her brother, Yankee baseball legend Derek Jeter, that helps young people turn away from drugs and turn toward healthy lifestyles. Dr. Sampson Davis is the New York Times bestselling author, philanthropist, speaker and ER physician. Together, they have created The STUFF Movement to help us discover the hidden strengths within.

“The stuff” is an inner fortitude, and both authors know of what they speak. They’ve lived it. Jeter was diagnosed with cancer at 21 while attending college. Instead of giving up, she stayed in school and got treatment.

Fifteen years later, she is surviving and thriving. And Dr. Davis grew up in a crime-ridden New Jersey city, and faced time behind bars, yet went on to become a successful doctor and internationally-known motivational speaker and the founder of The Three Doctors Foundation. Oprah even dubbed him “the premiere role model of the world!” 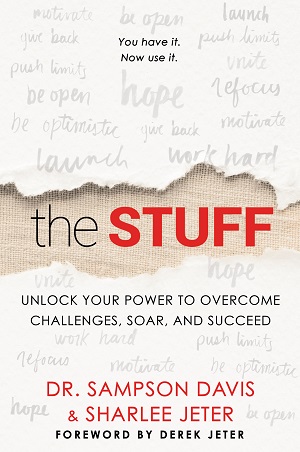 This interview couldn’t have come at a better time for me as I’ve been tackling several difficult issues with my family, dog and health, seemingly all at once. Both Jeter and Dr. Davis certainly offer pathways to answers on how not to give in to life’s nasty curve balls.

In the STUFF, Jeter and Dr. Davis take readers through 11 elements (i.e. “push limits,” “choose to hope,” “forge a motivation statement”) that will highlight how to overcome any obstacle. The authors say finding the Stuff can be learned, but it can’t be hurried…all you have to do is turn it on.

To find out more about The STUFF and how to unleash it, join the movement at www.thestuffmovement.com