Don’t miss our BRAND NEW interview on The Women’s Eye! On this episode, we feature a chat with voice actor, entrepreneur and fellow podcast host Melissa Moats!

Don’t miss our BRAND NEW interview on The Women’s Eye! On this episode, we feature a chat with voice actor, entrepreneur and fellow podcast host Melissa Moats!

Check out our video version later on in the post.

Melissa’s optimistic tone and organic happiness helped her battle cancer – twice – and has made for a successful voiceover career, even earning her the self-proclaimed title “Happiest Person on Earth.” 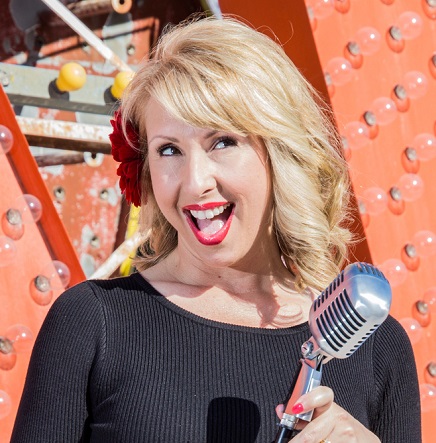 You will likely recognize Melissa’s voice from one of the thousands of commercials she has done over the past 18 years, including Best Western, Pandora Radio, and Ashley Furniture, to name but a few.

From bras to cars to furniture, she says, “You name it, I love to sell it.”

She took her love of voiceover and started teaching beginners in her living room, which became so popular she had to move to a bigger house, or open her own business.

So two years ago she launched the Las Vegas-based The Voice Actors Studio, and that is where I first met Melissa.

I have officially embarked on a voice acting “side career,” thanks to my mentor, teacher, and now friend, and I want everyone to hear, not only Melissa’s voice, but also her advice on practicing life every day in a grateful way.

“It’s hard to be in a negative mindset if you are in a grateful mindset,” she says.

And that positive, inspiring attitude toward life is taking Melissa on yet a new adventure. She just launched a video program called “The Womanpreneur Podcast” with her co-host Amanda McCune. Together, they will focus on empowering women in business and living life authentically.

Be sure to tune in to find out Melissa’s method of manifesting, why watching other people thrive is so rewarding, how to find your happy and so much more!

And check out our TWE videocast of this podcast! We want you to be a fly on the wall during our recording session at Adrenaline Studios in Las Vegas.  Enjoy!