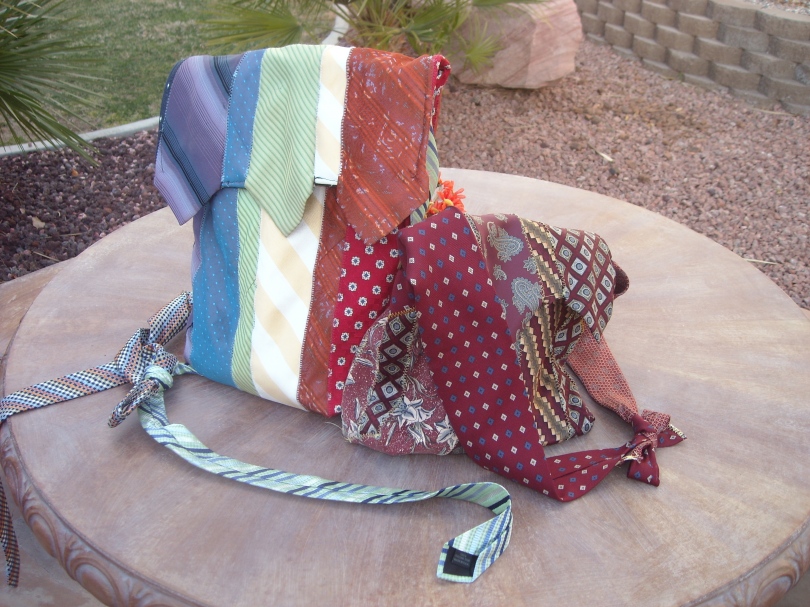 Its not like I needed another handbag. But when I was shopping at the artisan boutique Eclectica in Boulder City, NV, recently, I bought two of these adorable purses made out of men’s ties! Reusing old neckties to create a whole new item, a.k.a. upcycling, seemed like a novel idea.

Little did I know that a high school junior made these purses with one goal in mind: sell enough to help pay for a new prom dress.

This is prom season after all, and I got to thinking, what do you do if you don’t have/can’t afford a dress? Well, Ciarra Klingonsmith didn’t get all tied up in knots over it. She just decided to make one out of men’s ties!

This 17-year-old fell in love with designing when she got her first Princess sewing machine. She started out sewing clothes for her doll collection. Then she moved up to school book covers made out of old jeans and shirts. She often “borrows” old clothes and ties from her family.

Ciarra says the key to a good sewing project is to be quick and to improvise! And upcycling appeals to her love of the planet. Ciarra says, “Why waste if you don’t have to?”

With the Davis (Utah) High School prom coming up April 16th, Ciarra wanted to create her piece de resistance! But she needed money to buy the needed ties and supplies.

So she set to work with needle and thread to make a collection of tie purses. She figured maybe if she sold a few, she could earn enough to make a prom dress! She has sold 10 so far, which was enough to finance her tie-prom dress with money left over!

Now she’s ready for the prom! It took just a few hours, 40 ties and some creativity to make this 3/4 length halter dress. Ciarra is happy to report that a friend has already asked her to make her a dress! She says her sewing won’t stop there.

Down the line Ciarra wants to become an orthopedic surgeon. But right now she has plans to open her own upcycling business making more tie purses, dresses, and all things tie-related. She already has a name for it: “All Tied Up”.

We wish her all the best. Have fun at the prom, Ciarra! And if you have some old ties lying around the house, consider the possibilities!