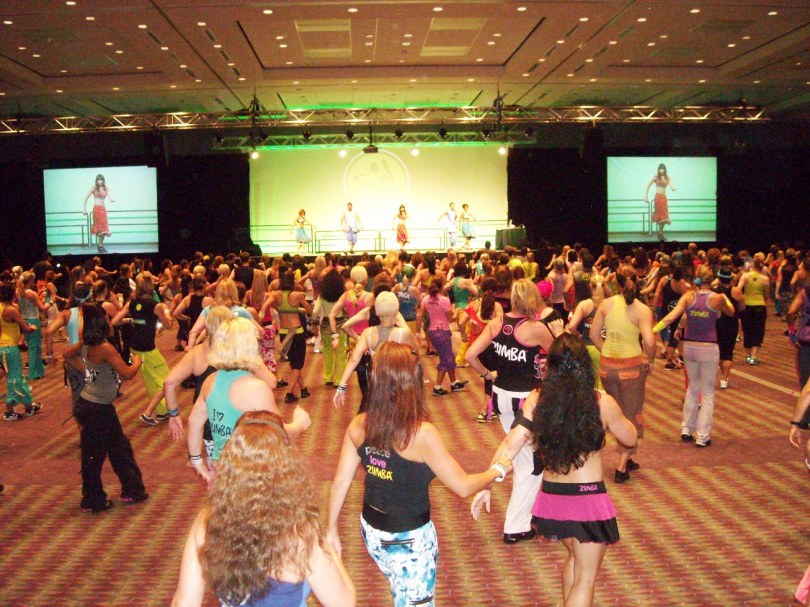 Whether you’re watching a late-night infomercial, visiting your local fitness center or catching a flash mob in Rockefeller Plaza on the “Today Show,” Zumba is everywhere! This Latin-inspired dance and fitness craze is celebrating ten years, and unless you’ve been living under a treadmill, it’s the hottest workout in the world. Yes, I said world!

“Zumba is a fitness party, and it is changing lives.”

I was fortunate to be invited to attend the 10th Anniversary Zumba Fitness Convention recently at the Peabody Hotel in Orlando, Florida. Good thing the hotel was prepared, because once you entered, you were surrounded in every direction by almost seven thousand colorfully-clad, enthusiastic Zumba instructors from over 80 countries, dancing samba, the cha cha, even reggaeton. The weekend was filled with classes, clothing outlets, fitness experts, and ended with a touching award ceremony.

“You feel this energy. People feel like they are home. It is a big family. It’s peace and love,” he says.

Beto says he created Zumba “by accident” when he forgot his usual music in class one day. As a last resort, he used his own mix of salsa music instead and a new fitness style was born. Zumba began with DVD’s, took off with a ubiquitous infomercial, and now it’s taught in over 100 thousand classes in 125 countries. Zumba doesn’t discriminate. Followers come in all shapes, sizes, ages, and genders.

To be sure, I am a fitness enthusiast, but I had yet to try Zumba myself. I’m not quite sure why I waited so long. The music was infectious, the energy was addictive… a sense of camaraderie filled the air. I immediately got the feeling that this was more than just a workout. Zumba is a fitness party, and it is changing lives.

My first class was with Dr. Bhavna Vaswani, or Dr. B as she is affectionately known by her faithful students. She teaches a Bollywood form of Zumba; you’d never know she took her first class just over a year ago. Now she teaches thousands.

“Zumba has had an incredible influence on my life. It felt like everything was in place except this one little piece, this self expression. I’m a mom and wife, but there was something missing. With Zumba, I finally got to express who I was.”

One instructor I met in her class says she had no purpose in life before Zumba. After the exercise program she says she lost several dress sizes and now teaches it to autistic students. Dr. B says this is a common testimonial.

“Beto wants you to bring out your inner self. I think that’s empowering for women. I was always told that sacrifice is the biggest job of a woman in my Indian culture. I think there is something though to capturing your individuality, understanding who you are, and letting yourself shine. That’s what Zumba fitness is all about.”

Gina Grant and Tanya Beardsley see that empowerment first-hand. These instructors are celebrities in the Zumba community with their unique teaching styles.

Gina says, “When women see results, it makes them feel good about themselves. They become this strong new powerful individual that maybe they weren’t before.”

Fighting back tears, Tanya says she was once a student looking for acceptance.

“Perfection is an illusion. I never expected to be here to see the world, to change myself, to change other people. Like a lot of women, we don’t give ourselves enough credit. One thing Beto taught me is that doubt kills. I just wanted to make people feel how Beto made me feel the first time I took his class.”

And not only does Beto attract men and women from all over the world to his dance party, the music comes from Grammy-winning producers and artists like Wyclef Jean and “Mr. Worldwide” himself, Pitbull. Both performed at the convention and it was by far the biggest Zumba class in its 10-year history.

Pitbull says, “Whether English or Spanish, we all speak music!! This just shows you how powerful music can be when there is a united front!!!”

Their chart-topping music is perfect for the Zumba enthusiast. And Wyclef plans to join forces with Zumba on charitable work, specifically in his native Haiti. “We are setting up actual programs in Haiti to help empower women who are victimized by rape in these camps. They’re not talkers. Zumba is do-ers. Zumba is not a selfish brand. It’s a brand for the people.”

I wasn’t the only convert at this year’s convention. Registered dietician and the “Today Show” nutrition expert Joy Bauer took part and says this is a culture she wants to join.

“Its not only about bringing the “you” out, it’s making you louder, creative and more expressive.”

Her “Food Cures: Eat Right To Get Healthier, Look Younger, and Add Years To Your Life,” is tackling how food can help what ails you. And now her expertise will benefit Zumba fans everywhere.

“I will be creating a nutrition program for Zumba. The new DVD’s that are coming out later this year will not only have the exercise component, but for the first time, will have a whole nutrition program as well. It’s not about dieting and losing weight; it’s about being the best you that you can be. It will catapult you to the top of your game through food.”

Perhaps the most touching part of the weekend celebration came at the final ceremony honoring internationally recognized nutrition and fitness expert Dr. Pamela Peeke and Zumba Instructor Corina Gutierrez. They were each given the annual Zumba International Role Model Award that “recognizes excellence in modeling the behaviors that inspire others to take an active role in improving their quality of life through increased health and fitness awareness.”

Thirty-two year old Gutierrez has osteogenesis imperfecta, a brittle bone condition. But she says the only limitations we have are the ones we put on ourselves. She’s humbled by the recognition.

“I cannot walk. But I teach from my wheelchair. Zumba improved my health, so I wanted to bring this experience to other people who are in the same situation as me. I also uploaded my videos and little did I know how popular they would be, not only with disabled/wheelchair-bound people, but also through the whole Zumba network.”

Dr. Peeke, who also wrote “Body for Life for Women,” says she is honored for simply following her passion.

“My philosophy is that women need to become more assertive about their own needs. They get an A+ for helping everyone who comes within 100 feet of them, but they don’t do so well when it comes to helping themselves. It’s extremely important for women to sit down and address two things: one, get in touch with what your needs are. And two, identify what gives you joy in life.”

As she brought the weekend to a final close with a powerful keynote address, Dr. Peeke says sharing the stage with Corina and thousands of “Zumbamaniacs” is a highlight she won’t soon forget.

“Zumba is a place of transformation. It was clear here that Zumba is a family and that they take care of their own very well. There was a sense of connectedness, bonding, and a unified mission. Because of that, I don’t think anyone of the 7000 who came felt alone. There were new friends to be made and new connections to be enjoyed and embraced.”