“You can’t be what you can’t see.” Marian Wright Edelman, the founder and President of the Children’s Defense Fund, couldn’t have said it better. If young girls don’t have positive role models in media or female mentors in leadership positions, then how do they know what they can achieve?

Edelman’s quote is at the center of “Miss Representation,” a documentary that explores how the media misrepresents women and underrepresents them in positions of power. Jennifer Siebel Newsom is the actress-turned-writer, producer and director of this poignant film and was one of two outstanding guests of the Women’s Foundation of California Leadership Speaking Series, “Amazing Women…Inspiring Stories,” recently at the Skirball in Los Angeles.

Newsom was joined on stage by Dr. Kathy Magliato, one of very few female cardiothoracic and heart transplant surgeons in the world, and the author of “Heart Matters: A Memoir of a Female Heart Surgeon,” a book that addresses the #1 killer of women, heart disease. I couldn’t think of two more dynamic guests to kick-off what will be an ongoing series of innovative women leaders by the Women’s Foundation. Each of these women has achieved great success in two very different fields.

Newsom says she started in Hollywood at the ripe old age of 28. “I was told by my agent to lie about my age and take my MBA off my resume.” Before she and her husband, California Lt. Governor Gavin Newsom, had children, she began examining the role of media.

“I really started to question the lack of American culture that was celebrating tabloid and reality TV. I questioned what it would be like to raise children in that culture. When I found out I was pregnant with a girl, I became more concerned. Then I witnessed the 2008 campaign with Sarah Palin and Hillary Clinton and the messages that we were sending to young people, in particular about women’s value lying in her beauty and sexuality and not in her capacity to lead.”

So she set out to “give my voice, to empower young girls and to right wrongs in our society.” 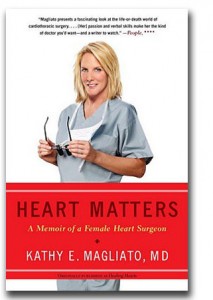 Dr. Magliato says it’s not just a Hollywood phenomenon. “If I go to work as a female heart surgeon – I work with primarily all men – if I wear a skirt, my IQ drops 40 points. People don’t want to know that you can be educated, pretty, and accomplished. People just want to see what they want to see. I bet a lot of women here cover up who they are because somehow you have to dumb it down to be respected.”

Literally what motivated these women to pursue their passion was being told they couldn’t do it. “The more people told me I couldn’t be a heart surgeon, the more I wanted to do it,” says Dr. Magliato. “I have a concussion and seven stitches in my forehead from hitting the glass ceiling over and over and over again until you finally break it. Sometimes nobody really helps you break it; you just have a thick head and get through it.”

Newsom said there were a lot of doubters when it came to making her film. But one woman, entrepreneur Regina Kulik-Scully, was instrumental in getting the film made, she says. “This is an example of how women can support each other and how necessary it is that we do it if we are going to lift our culture up.”

Now after the success at the Sundance Film Festival, and the airing on OWN, the Oprah Winfrey Network, people are jumping on the “Miss Representation” bandwagon.

With achievement comes advice, and both these panelists were eager to share. “It’s simple. Time,” says Dr. Magliato. “We are only given a certain amount of time to do the best we can. I really feel like every day I get up and I try to do my best. I see people who live who should die, and I see people who die who should live. When you stand on the precipice of life and death every day, you really appreciate the time you are given because it is finite. So use it well, and use it wisely.”

“We are planting a seed for this to grow above and beyond what we’re doing here.” Dr. Kathy Magliato

Both women are hopeful events like this will get their message to the masses. “I feel we are planting a seed for this to grow above and beyond what we’re doing here,” says Dr. Magliato. “The key is empowerment, and that’s really a journey that starts today for these women.”

Newsom added, “If magazines put Dr. Magliato on the cover instead of Jersey Shore stars, the Kardashians, the Housewives of X,Y and Z, I think you would start to see a new America.”

The conversation concluded with a private viewing of the exhibit “Women Hold Up Half The Sky,” inspired by the Nicholas Kristof and Sheryl WuDunn bestseller, ” Half The Sky,” and sponsored by the Women’s Foundation of CA.

I had the chance to speak with Judy Patrick, the CEO and President of the Foundation, to know more about their ongoing speaking series, the exhibit, and their accomplishments.

EYE: Why was the Women’s Foundation of California established?

JUDY: The Women’s Foundation was created in 1979 to address the disparity in funding to women’s and girls’ issues. We make strategic grants to organizations run by and for women who have historically been under-served. We also fund organizations that, because of the issues they address or the communities they engage, have limited access to mainstream and traditional funding sources.

The Foundation has awarded $29 million in grants and assistance to over 1,200 community-based organizations in each region of the state. We raise every dollar we give away. Our goal is to fund bold community-led solutions, apply a gender analysis to complex issues, and communicate complex issues in a way that inspires public will to act.

EYE: Why did you want to sponsor a “Leadership Speaking Series?”

JUDY: We wanted to create a unique space for women to come together, network, build community and have conversations about big, meaty topics. The “Amazing Women…Inspiring Stories” Speaking Series provides an opportunity for women to hear candid stories and experiences from other powerful women about both the obstacles they face as well as strategies for overcoming them.

In addition, this series seeks to highlight how women’s leadership benefits communities and inspires other women to step up and develop the skills, knowledge, experience and connections they need to make a difference in their families, communities and our state.

EYE: You’re off to a great start! Why were these women chosen?

JUDY: “Miss Representation,” Jennifer Seibel Newsom’s new film, highlights the pressures on women that derail them from pursuing leadership positions, particularly in politics. We understand the urgent need for more women leaders in politics and advocacy and believe that movies such as Ms. Seibel Newsom’s are critical in making this happen.

Dr. Kathy Magliato is a pioneer in her field and embodies the courage and imagination it takes to succeed in a male-dominated field. We work to help women and girls increase their presence in traditionally male-dominated subjects such as math and science. For example, our book, “It’s a Money Thing,” trains girls in financial literacy. 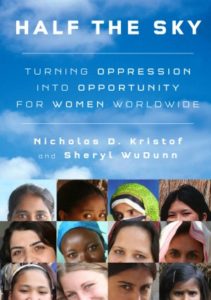 EYE: Many people know about the Kristof/WuDunn book, “Half the Sky.” The exhibit “Women Hold Up Half the Sky” is sponsored by your Foundation. What is the significance of the exhibit?

I’ve seen first-hand young girls being pimped on the streets of Oakland and victims of domestic violence who carry the scars of their abuse. I’ve shared meals with people whose water is drawn from a tap that is too polluted to drink, walked through communities with no paved streets and no access to public sewers systems. I have also been moved by the women from these communities who everyday find the strength and courage to work to change these conditions.

Two organizations we funded are highlighted in the exhibit: CAST (Coalition to Abolish Slavery and Trafficking) and “A Window Between Worlds.” We funded these organizations because they put their leadership and passion to work in changing women’s futures.”

EYE: What is one of your proudest accomplishments?

JUDY: The Women’s Policy Institute (WPI), which we launched in 2003. WPI builds the leadership capacity of community-based women. The 1-year program provides hands-on training in public policymaking. We recruit up to 35 fellows each year from among our statewide grant partners and other community-based, research and philanthropic organizations.

Since 2003, WPI Fellows have worked to pass more than 27 new pieces of legislation, addressing issues such as human trafficking, childcare, and public assistance. Of these, 14 bills were passed into law. Success for WPI Fellows is not only measured by a bill becoming a law.

EYE: How difficult is it to encourage women to take leadership roles? Is the tide changing?

JUDY: We see change happen every day. The Women’s Policy Institute does an incredible job of helping women to step into leadership and powerful civic engagement. Women need to be civically engaged in three key ways: 1) As voters; 2) As office holders; 3) As advocates. The U.S . is lagging behind most of the world, coming in at 71st, when it comes to women in political office. We have just six governors. Only 15 percent of our city’s mayors are women. And just 24 percent of our state legislators are women.

Not just women lose when there isn’t more equal representation. Communities lose. After years of working on public policy in Sacramento and helping to bring more women into the public policy process, I can tell you that having women involved in all aspects of public policy makes a difference in the quality of public conversation.