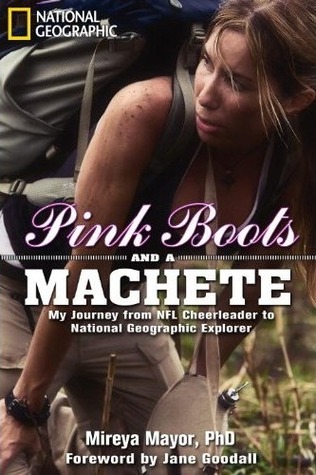 The title of this new memoir about pink boots and a machete by Mireya Mayor intrigued me. How would the pink attire match the long knives? Turns out it’s the inspiring story of Mireya’s journey from Miami Dolphin cheerleader to Fulbright Scholar to well-respected primatologist. That’s just a part of her resume, and you can also add mom with two daughters as well as pregnant with twins! 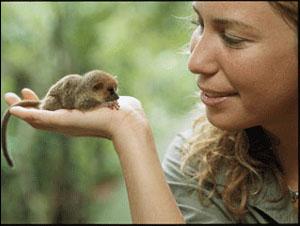 The Wild Life Bio on her website explains how primatology became her passion. Fascinated by anthropology in college, she applied for a grant to spend a summer exploring in a Guyanan jungle. Fueled by this experience, the next year Mireya went to the remotest of parts of Madagascar to study endangered animals. That fascinating trip hooked her on studying primates in the wild for life.

The National Geographic discovered her on that island in the Indian Ocean and offered her a job as a staff wildlife correspondent. Dr. Mayor (she has a Ph.D. in anthropology) appeared on “Ultimate Explorer” as well as on her own show “Wild Nights with Mireya Mayor” on their channel WILD!

Some of her accomplishments:

–in 2000, co-discovered a new species of mouse lemur in Madagascar

–worked with leopards in Namibia

–one of four explorers in 2009 to retrace the nearly 1,000 mile trip in Africa of Staney & Livingstone for a television series

–Jane Goodall wrote the forward to her new book

In spite of all her travels, this dedicated anthropologist-primatologist’s love is the rain forests of Madagascar. She worries that this natural laboratory could vanish in our lifetime.

“Until I can walk away in good conscience, knowing it’s going to be okay, I just can’t leave,” Mireya told the National Geographic. Now, that is dedication!