New Yorkers are seldom impressed. That is why when I heard the heavy buzz on the street for the Metropolitan Museum’s exhibit, Alexander McQueen: Savage Beauty, I grabbed my MetroCard and bussed it over to the rarified atmosphere of Fifth Avenue to see what it was all about.

I have a love-hate relationship with haute couture. I absolutely love to look at the clothes, but wearing them will ever remain a fantasy for me akin to space flight. Many of my fashion-unconscious friends cannot believe that I religiously attend the exhibits at the Met’s Costume Institute. But the truth is I would not think of missing one.

Yet whether you love fashion or loathe it, I guarantee that you will not easily forget the McQueen show. The London-based designer had a staggering vision which evolved throughout his eight successful years in the fashion industry. His life ended tragically through suicide in 2010 at the age of 40.

“You’ve got to know the rules to break them.” Alexander McQueen

If the name Alexander McQueen rings a bell it’s because Sarah Burton, the creative director of the McQueen label, designed Kate Middleton’s bridal gown. But let me tell you, what you see in this show is not going to end up at Buckingham Palace.

That is except for the Phillip Treacy hats which are a favorite of the young British royals. You no doubt remember Princess Beatrice’s iconic piece worn to Prince William’s wedding. Doesn’t everyone? This exhibit mixes the hats liberally with McQueen’s designs to great effect.

McQueen is a rare paradox, a finely trained designer, who apprenticed with the best in the world from Saville Row tailors to the House of Givenchy, but who was also a renegade. The son of a British housewife and a Scottish taxi cab driver, he seemed out to prove himself to the world and yet also driven to break every rule which that world imposed.

He once said, “You’ve got to know the rules to break them. That’s what I’m here for, to demolish the rules, but to keep the tradition.” McQueen declared about his work (and possibly his life), “There is no way back for me now. I am going to take you on journeys you’ve never dreamed were possible.”

And through this exhibit he does. It’s all there: death, romance, sex, sado-masochism, woman as warrior, woman as muse, woman as object, melancholia, goodness, evil, perversity, and the raw fruit of the earth itself.

His repertoire included a wide array of idiosyncratic materials such as hair (inspired by Victorian times when prostitutes would sell their hair for kits of locks to be bought for lovers), razor clam shells, feathers, Tartan plaids, and animal skins along with the more conventional leather, lace, jewels, brocades and silk.

Buy you cannot really talk about McQueen unless you talk about the cut. Of that he was a master. His designing was done mainly during fittings in which he would constantly change the cut.

He explained his work, “[Through cutting, I try] to draw attention to our unrelenting desire for perfection. The body parts that I focus on change depending on the inspirations and reference for the collection and what silhouettes they demand.”

Mc Queen didn’t design clothes as much as he constructed them. One need only take a look at the array of black jackets from his early career to see that.

Also his steel spine-corset and silver plated torso covering convey something hammered rather than spun. But in the end, it is his poetic paen of death in his Romantic Gothic collection that one is left with. McQueen once said, “It is important to look at death because it is a part of life.

It is a sad thing, melancholic, but romantic at the same time. It is the end of a cycle —everything has to end. The cycle of life is positive because it gives room for new things.”

After the Met and McQueen, it was a short walk to the Plaza Hotel and the adjacent Paris Theatre now showing the French documentary, L’Amour Fou (Crazy Love). This film is a look behind the public life of designer Yves St. Laurent. 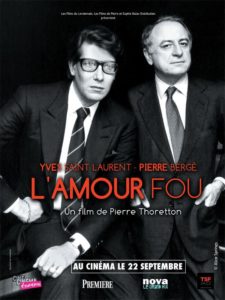 It is directed by Pierre Thoretton, Catherine Deneuve’s former son-in-law, and framed around the 2009 auction of the priceless art collection the grand couturier amassed with Pierre Bergé, the man who shared his private life and the creation and management of his fashion empire for almost 50 years.

Held after St. Laurent’s death, the auction broke all records at Christie’s Paris raising 483 million dollars in sales for the St.Laurent-Berge foundation which is devoted to AIDS research. L’Amour Fou is the story of much more than that auction.

It is a portrait of two privileged men, the life they shared, and the end of their long relationship. It shows a relationship which endured St. Laurent’s substance abuse and his depression. Yves St. Laurent had a genius for fashion which made him undeniably one of the world’s most famous designers.

He met everyone he wanted to meet and did everything he dreamed of doing. L’Amour Fou includes a remarkable scene filmed in the Sixties in which the then young designer is showing his portrait done by a young, new painter named Andy Warhol. The group of friends casually listening to him includes a distracted Mick Jagger.

St. Laurent, who once said, “Fashion fades. Style is eternal,” made his early name in the Fifties as the design head of the House of Dior when he was just 21 years old. In the Sixties he introduced his memorable Mondrian dress.

But it was the Seventies that became the St. Laurent decade. He revolutionized the fashion world by creating trousers and broad-shouldered suits that were images of power for women.

His focus on an androgynous look was extremely influential in that he popularized the tuxedo for women. He broke racial barriers by being one of the first designers to use women of color in his shows. His empire of clothes, accessories and fragrance grew to be a world-wide phenomenon.

As a young man, St. Laurent had sad eyes that eventually grew to become his jaded worldview. Throughout, the movie portrays a tortured man who in the end found pleasure in little, not even the fashion he devoted his life to creating. If you’re a Franco-phile or a fashion-phile you might find L’Amour Fou of great interest.

And if you catch the McQueen show and the St. Laurent film together, as I did, you will no doubt be struck by the distinctive contributions each of these men brought to the fashion world (a world besotted with its own beauty) and the palpable sadness of their stories linking their lives like a golden thread.

These offerings are not merely about style; they are fitting tributes to the work and legacies of two princes of fashion that are well worth seeing.

About the author…Sue Podbielski has worked as a writer, a producer, and a humanitarian. She says she is blessed by wonderful friends who have given her every good opportunity she has ever had.