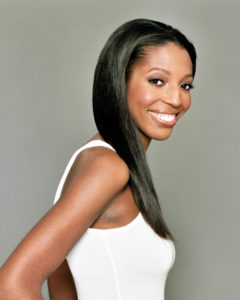 She has an eye for pinpointing the hot button issues in today’s political discussion. Commentator Keli Goff has been called “fearless” and “a breath of fresh air” since she emerged from the 2008 election as a voice for the hip-hop generation.

If you follow politics, you’ve read her editorial blogs on The Huffington Post and loop21.com or listened to her on radio and TV shows across the country. She has an opinion and isn’t afraid to share it. 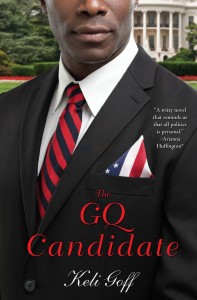 Now Keli’s experience in following Presidential campaigns and elections has inspired her first novel “The GQ Candidate,” a page-turning look into the inner circle of an unlikely man running for president, an African-American who was raised by a multi-racial family.

She comes by it naturally; after all, her passion for picking presidents began as a preteen. With the 2012 election campaign underway, I wanted to check in with Keli to see what’s on her mind these days…

EYE: When you were nine you picked your first presidential candidate -Richard Gephardt -and announced it at dinner. Why?

KELI: According to my parents “I liked his commercials.” I actually think that I liked his red hair. Being a kid it probably made him stand out to me from the crowd of other candidates running.
EYE: You started out working as an intern for Hillary Clinton. Did you always want to work in the political arena?

KELI: Since I picked my first presidential candidate at nine, it’s safe to say I’ve had an interest in politics since childhood. My mom would always take me with her when she would volunteer as a poll worker or on campaigns.

I’m sure that had an impact, and once I was in high school I knew I wanted the opportunity to work on a campaign myself. I eventually did, interning on the Clinton campaign and others while in college.

…it is much easier for misinformation to spread quickly, which is a problem.

EYE: Is social media running campaigns now? Is that a good thing?

KELI: Social media is certainly helping to shape campaigns today. George Stephanopolous has noted that when he worked on the Clinton campaign, there was essentially one to two news cycles. Today, thanks to twitter, there is theoretically a news cycle every minute.

The fact that we as voters and members of the media have access to so much more information, so much more quickly, is great. But there is also so much more clutter to distract us, and it is much easier for misinformation to spread quickly, which is a problem. There are pros and cons but I would say for now the good outweighs the bad.

EYE: Your first book “Party Crashing, How the Hip Hop Generation Declared Political Independence” struck a nerve. Talk about the impact of young black voters on the electoral process. You interviewed many of them for the book.

The 2008 election was really a defining moment for young, multi-cultural voters, or as I call them in my book, Generation Obama. It really put them on the electoral map.

EYE: Obviously you were born with the ability to write well. But you didn’t start out as a novelist. “The GQ Candidate” is your first fiction, and you write about a man named Luke Cooper. Who is this man?

KELI: Luke Cooper is African-American. He’s charismatic, well-liked, handsome, and he’s a candidate for president of the U.S. He comes from a multi-racial family…not that any of this sounds familiar in the slightest. Ha!

“I became fascinated during the last election with this issue of racial-versus-religious identity.”

EYE: But you thought of this before a certain person ran for president, right?

KELI: I did start working on it during the last presidential campaign, although the Luke Cooper character is adopted and was raised Jewish. I wanted to do that because I became fascinated during the last election with this issue of racial-versus-religious identity.

I thought it was interesting that I have older family members who grew up during segregation who never thought they’d live to see a black president in their lifetime. It was inconceivable. And then our country finally gets a black president, and a quarter of the population says they are pretty sure he is a Muslim and therefore can’t vote for him.

It struck me as funny in a bad way. Now you look at someone like Mitt Romney, who ran before, and I know many people who really like him and think he is qualified, but what is fascinating is that they find him
unelectable because of his religious identity. 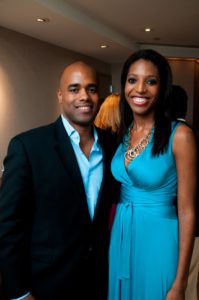 EYE: Do you find it frustrating that the perfect person could be running for office, but because they pray differently, that really makes a difference with the voting public?

KELI: Absolutely, and the reason I wanted to tackle that is the million dollar question: Has religious identity officially trumped race as the biggest obstacle to the White House? A real case can be made that it has.

I wanted to explore that issue in my book. I don’t know what that says about our country, and I’m not judging people who make their decisions based on that, but I think it bears having a conversation about.

EYE: Do you think that we owe a lot to older generations?

KELI: We owe everything. When there is evolution, however, there are often differences in perspective. I’ve written quite a bit about it, particularly in my first book “Party Crashing.” What we’ve seen time and time again is that age really does color your perspective on many things especially if you’re talking about something like race.

Research has shown that in study after study, the younger you go, the more open-minded people are. So all of that does impact political differences, and I think that’s where some of this tension has existed historically.

“People think I’m lying, but I really do consider myself an independent.”

EYE: Do you think you’ve become the voice for many people: young, female, African-American…?

KELI: I’m always hesitant to embrace any labeling of that kind because I know how frustrated I feel when I see someone on television who I’m told is speaking for all these people, and I’m saying, “She’s not speaking for me. I don’t agree with a single word coming out of her mouth!”

What one of my publisher’s said to me is that he doesn’t always agree with me, but the reason he likes my writing is because he never knows what I’m going to say. I always want to stay that person. People think I’m lying, but I really do consider myself an independent.

I’m really an issue-by-issue writer, and if you ask me what I think of a particular issue, I’ll probably tell you and if I don’t tell you, it’s probably because I don’t feel educated enough to form a strong opinion. So I hesitate to say that I speak for all women.

EYE: You are a pundit but you can’t be pegged. You don’t like to be pigeonholed…

KELI: I found an enjoyable experience on “The Dylan Ratigan Show” on MSNBC. I write my columns every week, and they let me come on and talk about my columns. That’s a great forum for me because I’ve never once felt pressure to lean one direction or push a particular agenda. I push the opinion I have on that issue on that day.

I think more voters are heading in that direction. You look at all the polling. Most Americans are sick of both parties being ridiculous. They are sick of things not getting done. So I think we’re going to move into a direction where people are more accepting of voices that can’t be pigeonholed.

EYE: You’ve been described as fearless and a breath of fresh air. What do you think of your “role” as a political pundit?

KELI: Writing is my favorite medium. I like editorial blogging, and I think it reaches more people — I have no proof of that — but I like it because you actually have a chance to expound, not just a soundbite, on what you really mean and how you really feel and to have a substantive conversation on specific issues.

I feel I’ve done my job best when someone says they didn’t know about something until they read my column and took action…to make a difference. And that’s when I feel I’ve really excelled at my job.

EYE: What are your thoughts on the 2012 election? Will it be close? I won’t reveal what happens in your book with Luke Cooper but do you have a thought about who will be president in 2012?

KELI: Unless the GOP starting lineup drastically changes, I think the Obamas won’t be ordering moving vans anytime soon. I’m astounded that the GOP has had a tough time lining up a viable, credible candidate against someone who’s approval rating isn’t that high.

I think John Hunstman and Mitt Romney are both incredibly strong, credible candidates, and unfortunately, for all the reasons we spoke about earlier, I don’t think they can get through a Republican primary. Some one asked me, “You don’t think anyone can beat Obama?” And I say, I do!

I think the people who can beat Obama just can’t beat their competitors in a GOP primary. That’s a problem for them. Polling shows ¼ of registered GOP voters don’t want to vote for someone who is a Mormon. I don’t know how you change something that has been that way since the 1960’s.

“I do empathize with any spouse, family member or close friend of any candidate anywhere.”

EYE: You’ve written about the First Lady and your book deals with the people surrounding a political figure and what their lives are like, especially under the microscope. Do you empathize with Michelle Obama, and do you think she’s happy?

KELI: That’s a great question, but far be it for me to answer it since I don’t know her. But I do empathize with any spouse, family member or close friend of any candidate anywhere. I can’t imagine what that must be like. You made the one mistake of falling in love with someone who decides I think I want to become one of the most scrutinized human beings on the planet!

What I tried to convey and make clear in my book is to keep in mind that marrying, dating and being friends with a presidential candidate is not the same as being friends or married to Tom Cruise, Meryl Streep or Jlo because no one knows what Meryl’s husband’s religion is. And no one cares. It’s not relevant.

If you run for president, people want to know where your spouse used to go to church. It’s a scary, terrifying tradeoff. I can’t empathize enough.

EYE: Thank you, Keli!!! We’ll be watching and reading your blogs!