Playwright Eve Ensler, Founder of the V-Day Movement, On the Power of Emotions 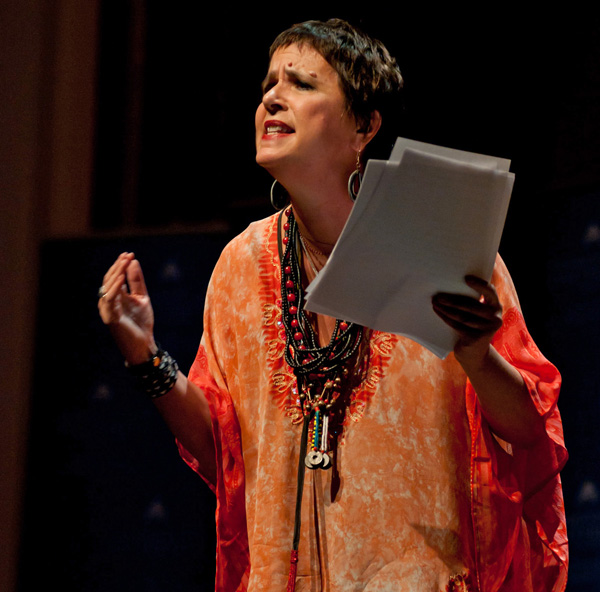 Eve Ensler changed my life. She did it in fifteen minutes from halfway around the world–she in India, I in northern California. Ensler is one powerful woman. 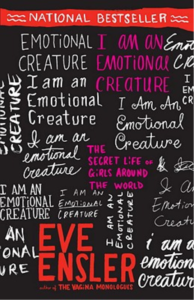 So when I heard she was going to be speaking in my neighborhood as part of the Dominican Institute for Leadership Studies’ Lecture Series* in Marin County, CA, I could hardly wait to see Eve in person, to feel her immense-intense-common-sense energy and to thank her.

And I wanted to hear about her latest book and play, I Am an Emotional Creature: The Secret Life of Girls Around the World. The book is already a national bestseller, and the play will make its world premiere at the Berkeley (California) Rep, June, 2012.

Ensler is best known for her play The Vagina Monologues and as founder of the V-Day movement, which has raised more than $85 million to prevent violence and protect abused women and girls. (V-Day is observed around the world on February 14th; the “V” stands for Victory, Valentine and Vagina.)

Ensler herself is a survivor of incest, cancer, and horrific physical violence. She has earned many awards including honors for playwriting, performance, and anti-gender-violence work.

I had been blown away by Ensler’s “Embrace Your Inner Girl” TED Talk, recorded in India, in which she used the metaphor of a “girl cell”–your inner girl, and mine–to celebrate the power of emotion, compassion, ambiguity, vulnerability, intensity, doubt… and other “girly” traits. It was a new idea for me.

I grew up in a typical mid-western household in the 60s, not religious, but with heavy Puritan undertones nonetheless. My parents believed that man’s ability to reason was what set him apart from the rest of the creatures on earth. Since emotion was the opposite of reason, it followed that overcoming emotionality was essential to being human, and that teaching a child to suppress emotions was one of the most important tasks of parenting and of “civilization.” 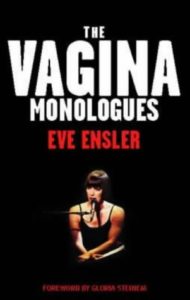 Ensler delivered a different message at the event: Emotions have their own inherent logic. They are essential to balance and wisdom. They are vital to healing ourselves and the world and central to the evolution of our species and the continuation of the human race.

Ensler knows we must own our emotions. She knows how powerful they are. “Being a girl is so powerful that we’ve had to train everyone not to be that,” she said.

I loved Eve’s talk about emotionality as an essential component of humanity! Hearing her speak, I finally understood that my emotions were an essential part of me, that they make me wiser, more powerful, more connected, more complete, more alive. And in understanding that, I have, in a small way, helped my culture–and civilization itself–to evolve beyond patriarchy and towards a more compassionate ethos.

And what did Eve have to say about men? They need to help each other, to give themselves and each other permission to be emotional, to care, to cry, to admit when they’re frightened or sad or lost. What happens to boys who cannot cry? They become violent. “Bullets,” Ensler says, “are hardened tears.” Boys, too, need to embrace their “girl cells.”

But Ensler has done much more than liberate me–a white American with plenty of food and clean water and shelter and work–to be more comfortable with my emotions. She has done more than suggesting that boys and men show grief, tenderness, and vulnerability.

As she traveled the world talking with women about The Vagina Monologues, Ensler heard story after story about rape and gender-related violence. For the past five years she has been hearing firsthand from girls who were sold into slavery, forced into prostitution, raped, circumcised, and brutalized in other ways.

Visiting the Democratic Republic of Congo in 2007, Ensler learned that rape was being used methodically and extensively to destroy family relationships, which, in turn, destroyed communities and which left the area ripe for plunder by militias charged with taking over the mines. Raping girls had made way for raping communities, and then for raping the earth.

Ensler spoke passionately about her latest project, City of Joy, which grew from her own emotional, creative, and defiant response to what she heard in the DRC. Established by her V-Day organization, supported by UNICEF, and created from the Congolese women’s own vision, City of Joy is a place where victimized girls and women can go to be safe, educated, and healed.

It opened in July, 2011, and its first class graduated January, 2012. The graduates have each committed to returning to their communities and sharing what they have learned.

The healing goes both ways. “I don’t think I would have lived through the experience of cancer if I hadn’t been living for the women of Congo,” Ensler said. “Serving is what makes me happy. I know how easily one person can change another person’s life. If I can be that person … to give a person a reason to go on in their life…I can’t think of a better thing to do.”

She does it with joy, compassion, devotion and ferocity. As Eve says, “I love, love, love being a girl!” She finished the lecture with a call to action: for women around the world to participate in a general strike next V-Day, February 14, 2013, to walk off their jobs, out of their kitchens and schools to demand an end to violence and to dance.

The global strike is sponsored by One Billion Rising so named Eve said, because one billion is the number of women on earth who will be beaten or raped in their lifetime. After the lecture I was privileged to shake Eve’s hand and thank her in person for changing my life. I did it with a song in my heart and tears in my eyes–because I am an emotional creature.

*This was a cooperative effort between Dominican University’s Institute for Leadership Studies and the independent bookstore Book Passage.

Laurie McAndish King is an award-winning essayist and photographer with a knack for finding adventure all around the world. Her work has aired on public radio and appeared in Smithsonian magazine, The Best Women’s Travel Writing 2009, and other magazines and literary anthologies. One of her photographs was on exhibit at the Smithsonian Institution for six months.