A Good Night Sleep and Humble Design, an organization we featured earlier this year on TWE, are two non-profits striving to help those without the simple things in life that so many of us take for granted each day.

They teamed up in July to deliver 100 beds to 46 families in the Detroit area, but this recent effort is only the beginning. A Good Night Sleep will be making bed drops later this year to the Los Angeles Downtown Women’s Center and across the country.

We wanted to find out just how the idea for A Good Night Sleep came about and what it takes to organize this kind of charitable effort.  Founder Jennifer Kenning and director Leigh Ann Lanaux explained what they are hoping to accomplish…

EYE:  What is A Good Night Sleep?  How does it work?

LEIGH ANN:  AGNS was created out of the vision that every person should have the benefit of a good night sleep in the comfort of his or her own bed. We are tackling this issue on a national front and have located partners across the country that all have a great need for beds and bedding essentials.

We know a good night sleep can help people conquer the challenges of transitioning out of homelessness and get to a place where they can thrive and contribute in society.  There wasn’t one organization just focusing on beds or trying to conquer this aspect of homelessness.

“Everyone deserves to have a bed to sleep in at night…”

EYE:  Is AGNS a unique concept?

LEIGH ANN:  As Jennifer tells in her story below, she was looking for a non-profit that gave beds away so she could just make a financial contribution.  She could not find any that were donating to the homeless population.  So, yes, essentially AGNS is the first of its kind.

AGNS will either seek out the partnership and need or agencies can submit a Bed Request Form through the website at www.agnsfoundation.org. There are certain criteria that must be met in order for the request to be considered. No one person’s need is greater than another.  Everyone deserves to have a bed to sleep in at night, but in order for us to logistically fulfill the needs we must have a few guidelines. 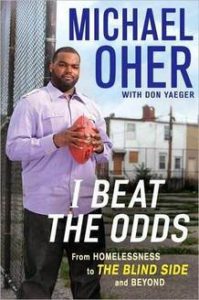 EYE:  How did this non-profit begin?  Where did you get the idea, Jennifer?

JENNIFER:  Can you imagine not having a bed to sleep in? I pondered this after watching the 2009 blockbuster movie, The Blind Side. A scene in the movie particularly moved me where Michael Oher had just been shown his new room by his guardian mother, Leigh Anne Tuohy.

During that scene he tells her that he had never had a bed before. In that powerful moment, she realized that she had taken for granted having a bed her entire life. As the days and weeks went along, I was searching for a way to make an impact for those without beds and to bring awareness that having a bed is a privilege.

EYE:  What else sparked your interest in starting the organization?

JENNIFER:  My initial search on a way to get involved encompassed looking for an organization that I could write a check out to that focused on delivering beds to people trying to break the cycle of homelessness. To my surprise there wasn’t a single one with this purpose.

During my search for a way to make a difference, I also revisited a book I had recently completed called Wide Awake by Erwin McManus. I was reminded of a question that Erwin posed, “Are you sleep walking through life or are you living Wide Awake?”

EYE:  How and why have you partnered with Humble Design?

LEIGH ANN:  The partnership with Humble Design which was co-founded by Treger Strasberg and Ana Smith began after I saw their story on HopeMob, a social media based website that unites generous strangers together to bring hope to people with immediate needs.

It was a natural fit.  Our missions align with one another, and the clients that they serve are the same people that AGNS seeks to serve.

EYE:  What impact do you think you’ve made since its inception?

“Until recently Detroit had the largest homeless population in the nation…”

EYE:  Why target the Detroit area?

LEIGH ANN: Until recently Detroit had the largest homeless population in the nation.  The majority of those homeless were adults and children in families with children representing over half the total number. Since Humble Design is based in Detroit, AGNS felt like this was a great opportunity to make a significant impact.

EYE: You are addressing a problem that is affecting many across the country. Are the numbers rising, maintaining or decreasing?

LEIGH ANN: Although reports are showing a slight decrease (around 1%), it’s likely due to funding of the Homelessness Prevention and Rapid Re-Housing Program through the American Recovery and Reinvestment Act of 2009.  The program helped nearly 700,000 at-risk and homeless people in its first year but will sunset this September.

EYE:  Will there ever be a time when homelessness won’t be a concern?

LEIGH ANN:  It will always be a concern.  Even in the best economies, extenuating circumstances can cause a domino effect in a person or family’s life that eventually leads them to being on the street.

The HPRP (mentioned above) is due to phase out this fall causing concern that the help these people are now able to receive will no longer exist.   That will make  it more difficult for them to get into permanent housing.

EYE:  Describe the event on July 28th.  What took place?

LEIGH ANN: The Humble Design team along with their volunteers convened at their warehouse in Troy, MI.  Volunteers loaded 100 beds, box springs and frames onto delivery trucks and delivered the beds to 46 families all over the metro Detroit area.

Humble Design also held a bedding drive so the recipients not only had new beds to sleep in but also new sheets, comforters and pillows to adorn them.  These families were those that Humble Design had worked with to decorate and furnish their new homes.  The beds were the finishing piece all donated by AGNS out of Los Angeles.

EYE:  What do the recipients of these beds say?  How do you think it affects their lives?

JENNIFER:  They are extremely grateful as it gives them hope and a new lease on life. They perform better at their jobs, re-entering society, being parents, and believe they have a chance to make it this time around. The testimonials we have received are extremely personal and inspiring.

EYE:  Who are the volunteers?

JENNIFER:  AGNS as well as other organizations we partner with get volunteers from all over to help in facilitating our cause. They are people just like you that want to make a difference and usually are inspired by the story.  They realize that they, too, have taken having a bed for granted.

EYE:   Describe who the homeless people are in need?

JENNIFER:  They are people like you and me. They come upon hard times. They lose their jobs and have trouble finding a new one. First they lose their home, move into their car, then eventually the streets.

Where they differ is they don’t have a social network or family support, so they have nowhere to turn. They are often veterans, disabled, or domestically abused. They go through rehabilitation and a program to get back on their feet.

They move from emergency housing to transitional and finally permanent housing which is where AGNS will come in. Usually they are on Section-8 housing vouchers or other government support as well as having full time jobs.

EYE:   What have you learned about those who receive the help?

JENNIFER:  They are very much like us and then life unravels. They are courageous and determined to get back on their feet, but often not given a fair chance. When you hear their stories, you can relate and it breaks your heart.

We believe that you can cure a problem one step at a time so instead of tackling homelessness as a whole, AGNS is tackling one aspect of it. The people we help often turn around and pay it forward.

EYE:  What are the future plans for the organization?

JENNIFER:  With the Humble Design gift, we will have given away 629 beds.  Our next project is to deliver 25 beds to The Salvation Army’s Haven Program for Veterans at their West Los Angeles Healthcare Center.

We have a 48 bed project with the Downtown Women’s Center for Jill’s Place opening November, 2012, which is a permanent center for 48 women.

We are also doing 75 beds for the PATH permanent center opening in December, 2012, in San Diego. We’re in the process of completing additional projects from the ones mentioned above throughout the U. S. from September and beyond in ten different cities with an estimate of an additional 100 beds. Again our goal is to get to 1000 beds by the end of 2012.

EYE:  Best of luck to you and A Good Night Sleep with your goals for 2012.  You are doing fantastic work!