Farzana’s Blog from Pakistan on Malala: This Time History Will Never Forgive Us

On a day when CNN is reporting that nine people have been arrested for the vicious attack on Malala Yousafzai in Pakistan, our Women’s Eye contributor Farzana Ali, a correspondent for Aaj TV in Peshawar, has sent us her blog about meeting this courageous young student:

In early 2009 when I went to Swat in the north-western part of Khyber Pukhtun Khwa, to report on a situation there, the Taliban held control of Swat.  The civil administration just stayed in their offices.  And after the ban on girls’ education, the Taliban continued to destroy schools in the area.

I was searching for my interviewee but no one agreed to say anything about the situation, especially the destruction of schools and women’s education.  At that time my Swat reporter, Fyaz Zafer, told me about a girl living in Mangora, Swat. Maybe she would talk about the situation because she was against what was going  on there. 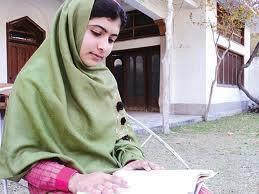 So Fayaz and I went to her home but our camera-man took another way because he didn’t want to take any risk with the Taliban.  At that time reporters were not allowed to do anything against them so they avoided doing things that would make an issue.

When we  reached her home, a little 11-year-old girl came to me and said,  “I am Malala Yousafzai.”  Her face and intellectual attitude seemed very bright. I was happy to find a very brave girl who had the courage to face all the challenges and do everything for education.

But at the same time I was afraid for her because I knew she was living in a place where women can’t express their views.  She told me that education is the right of every human being.  Why, she asked, were these people trying to stop her from her basic right?  Why were they trying to impose their evil thoughts which were against humanity and also Islam?

I came to realize in my first meeting with Malala that she was very clear about her dreams and future.  To me she was the hope for our future. When I came back, I made a report about Swat and included her interview. People liked her views and her bravery. 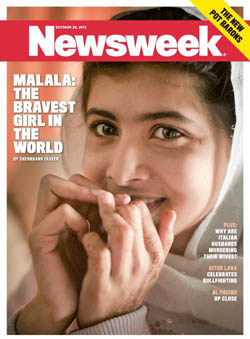 During and after the army’s “Operation Rah-E-Rast“ against terrorists in Swat,I met with her and her father many times, but in every meeting her boldness and  intelligence made me little bit worried.  She told me she was ready for every sacrifice but would not bow her head in front of people who were the enemy of  humanity.

That was the time when Malala gained the attention of the world.  She started writing a diary for BBC Urdu about life under the Taliban.  Using the pen-name Gul Makai, she wrote about the suffering caused by the Taliban who had taken control of the Swat Valley in 2007 and ordered girls’ schools to close.

During these three years, she and her father did a lot for the education of their homeland people, especially for girls.  People always were saying that her father was trying to use this little girl for his own interest, but I disagreed because to me everybody who is working for big causes or on the way of truth are always blamed for their honesty and hard work.

Malala and her father never cared about, or were afraid of, these personal attacks.  During these three critical years, they not only faced the people who blamed them but also got many threats from the Taliban. But they did not stop working  for education.

Although the Taliban were ousted from Swat after “Operation Rah-e-Rast,” her family had regularly received death threats. Many people told them to leave this town, but they believed they would be safe among their own community.

But they were wrong, and my fears came true.  On Oct. 9, 2012,  she was stopped as she returned home from school in Mingora and shot in the head.  To me that attack was not just on Malala but on  the ideology of Islam because in Islam the first lesson was to learn, which was also Malala’s dream.

That’s why after that attack, the respect, fame, sympathy, and love for Malala was indeed something beyond imagination. I was satisfied, also, that at least Malala’s sacrifices united the nation on one point, standing together in outrage.

Everybody was blaming the Taliban and defending this little brave girl, but after three days the situation totally changed. Malala became a spy and agent of  America in their minds, and the nation was divided into two portions.

One part was in favor of Malala but other part was against her.  The Taliban issued a detailed statement against her and although a large number of people in the country did not agree with it, they became silenced due to their fear of them.

I don’t know what will be the fate of Malala but for me Malala is the mirror which shows us our real face and how ugly we are.  Unfortunately, again we have made a shadow on that mirror and given safety to the enemy of our generation.  But this time history will never forgive us.

Farzana has been involved with giving seminars in Peshawar and Islamabad on the Malala attack.  She’s now in Berlin attending the 10th International Dialogue on Population and Sustainable Development.

Below is part of the documentary the New York Times did on Malala in 2009 that includes her father and shows the dangerous situation they both faced in getting and giving an education.