LISTEN TO OUR LATEST PODCAST: Sarah Benken founder and CEO of The KNOW Book + Tribe 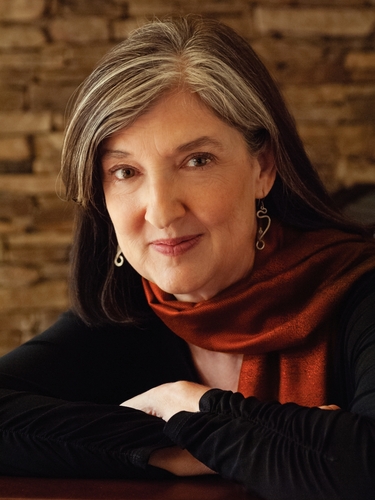 “The very least you can do in your life is to figure out what you hope for. The most you can do is live inside that hope, running down its hallways, touching the walls on both sides.”  –from Animal Dreams by Barbara Kingsolver

Barbara Kingsolver understands the importance of hope. And, for the benefit of her readers, Kingsolver does run down hope’s hallways.  She does touch the walls on both sides–and the floors and ceilings and doors and windows, too.

I heard Kingsolver recently at Book Passage in Marin County, California, where she read from her new novel, Flight Behavior, which is currently number one on IndieBound, the prestigious list of best-sellers at independent bookstores across America.

I loved Animal Dreams and several of Kingsolver’s other novels, so I couldn’t wait to hear her read from her latest book.  Since the author believes there’s a special place in Hell for people who give away the endings of books–or even important plot points–I’m not about to disclose too much.

But in Flight Behavior Kingsolver does, once again, what she does best.  She looks at an issue from multiple points of view, empathizing with characters who disagree with each other, turning a question over and over like a pebble in a tumbler until the hard edges are worn away and the result is something you want to carry around in your pocket, to touch and turn and rub for days and weeks, until you know every part of it by heart.

Flight Behavior is about global climate change, which Kingsolver says is “the great undiscussed topic of our time. How we talk or don’t talk about climate change. Why we believe or don’t believe in climate change.” It’s also about hope. 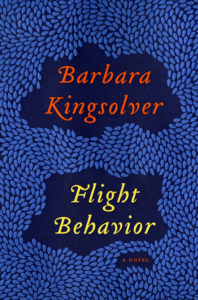 “I live in southern Appalachia,” she told the standing-room-only audience. “We are mostly a community of farmers.  We suffer first and hardest from climate change. We’ve been declared a disaster area so many times that we have to figure out a new name for it.” Yet some of the people who have been hit hardest by climate change don’t believe in it. That’s the conundrum Kingsolver wanted to explore in her latest novel.

“The book is about catastrophe and disaster and the psychological triggers that lead us to look at evidence and accept or deny what we’ve seen,” Kingsolver says. “It’s about how we see what we see and how our preconceptions influence what we see. We would like to believe that given the same evidence we would all see the same thing. But that’s not true. The book examines how we decide what to believe.”

We’ve seen Kingsolver tumble questions before, and loved her for it. In her 1998 bestseller, The Poisonwood Bible, she explored the results of colonialism in the Belgian Congo and the various ways people respond to situations for which they are not directly responsible, yet which have a direct effect on their lives.

The Poisonwood Bible, she says, “is about presumptions, arrogance, and the terrible things one country will do to another. How, in the aftermath, do we make our peace with that? I don’t believe there is one single answer to that question; there are many. In the four Price daughters and their mother, I personified attitudes crossing the spectrum from Orleanna’s paralyzing guilt to Rachel’s blithe ‘What, me worry?’ I wanted to create a moral conversation. That’s what literature can do.”

“I was reading chapter books before I started school. It wasn’t my goal to be a writer–I just loved words and books so much…. I just had to write.”

Literature has been “doing it” for Kingsolver since she was a child. “I started writing as a little kid. Books and words held a magic for me. I remember when I read my first word. The word was ‘orange.’ I was four years old. I saw a flash of orange and I got the mojo.” 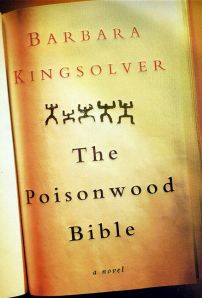 No matter how she approaches it, though, Kingsolver always seems to be thinking about social justice. In 2000, she established the Bellwether Prize, a $25,000 grant awarded every two years to support “serious literary fiction that addresses issues of social justice and the impact of culture and politics on human relationships.”

And Kingsolver has earned a few awards herself. The Poisonwood Bible was chosen as an Oprah’s Book Club selection, won the National Book Prize of South Africa, and was shortlisted for both the Pulitzer Prize and the PEN/Faulkner Award.

Nine of her books have been New York Times bestsellers, and in 2011 Kingsolver became the first recipient of the Dayton Literary Peace Prize Richard C. Holbrooke Distinguished Achievement Award. She has also been awarded the National Humanities Medal and the U.K.’s Orange Prize for Fiction.

Winning all those awards must have been difficult because Kingsolver is by nature a private person. “All public exposure is harrowing for shy people like me,” she explains, “especially in a culture that treats celebrities–even lower-order, literary ones–as objects…. The major work of my life has been learning how to accept the ‘fame’ package with a smile and then scribble a forwarding address on it as quickly as possible.

“I believe I can do my best work for the world by devoting myself to writing, attentive motherhood [she has two daughters], and being an active citizen of my community. Since public life directly conflicts with those tasks, I rarely travel for speaking engagements or public appearances.”

Although I enjoyed the opportunity to hear Kingsolver in person, I’m happy for her to stick with what she loves best and keep on writing. “It’s a fair enough vocation to strike one match after another against the dark isolation,” Kingsolver says, “when spectacular arrogance rules the day and tries to force hope into hiding.” You just keep striking those matches, Barbara. We’ll keep reading. 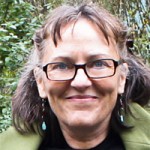 As an award-winning travel writer and photographer, Laurie McAndish King has a knack for finding adventure all around the world. Her work has aired on public radio and appeared in Smithsonian magazine, The Best Women’s Travel Writing 2009, and other magazines and literary anthologies. You can contact Laurie here.