“I like to think of each creation as an extension of what nature has given us.”  Kimberly McDonald

The world was waiting with bated breath to see what Mrs. Obama would wear Inauguration evening…and who the new designers would be. As we now know, she fooled everyone by sticking with Jason Wu, the designer of her smashing 2008 Inaugural dress whose star continues to rise, and that popular shoemaker to the stars, Jimmy Choo. 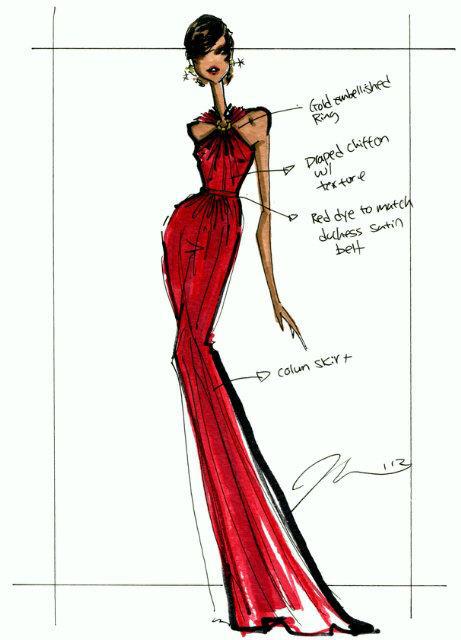 What we weren’t necessarily thinking about was the jewelry she would adorn. Now Kimberly McDonald has surfaced as the new kid on the design block with the First Lady’s blessing. It’s the earrings, bangles, and “ring” she designed that are getting a lot of attention. I kept thinking why would a ring be getting this kind of publicity?

It turns out it’s just not any ring. All eyes were focused on the ring that accentuated and pulled together the halter neckline on Wu’s spectacular some say fire engine red some say ruby red dress. The descriptive words on his ball gown sketch are “gold embellished ring” as you can see here.

Kimberly’s jewels have been worn by Mrs. O before notes jckonline.com. They could be seen at the 2012 Democratic National Convention, at an Operation Homefront Ceremony and a Hollywood initiative. 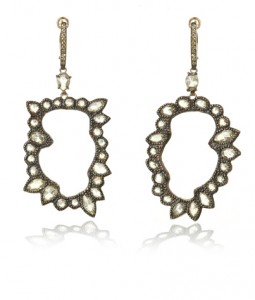 Understanding now exactly what this ring was all about, I had to find out more about the designer. It turns out that Kimberly is a native of  North Carolina, has lived in New York and has had a shop in Los Angeles since November. You can find her jewelry in fine stores around the world. ABC reports that prices range from $1,800 to a hefty $100,000.

Her website bio says she is committed to honoring nature by using reclaimed gold and wood as well as recycled diamonds and other precious stones. As she explains, “I like to think of each creation as an extension of what nature has given us.” To reuse rather than reap seems to be her mantra. Take a look to the right at the finely crafted earrings the First Lady wore to the balls. 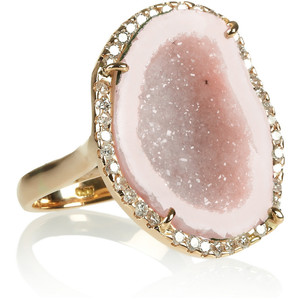 The show-stopping bauble to the left found on net-a-porter.com is further proof to her ingenuity and reverence of nature’s wondrous materials. It’s a one of a kind 18-karat gold ring with a light-pink agate geode and diamonds.

And now to those bangles on Mrs. Obama’s wrists. These unique bracelets with geode-outline shapes [all diamonds] were made by hand in New York as is all of her jewelry. 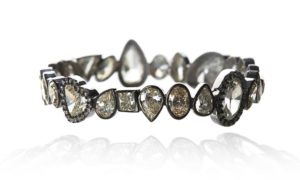 These are breathtaking designs by a rising star in the jewelry world! The baubles are not easily affordable but are eye-catching to say the least. The fact that they are eco-friendly using recycled and reclaimed materials is to be applauded. Here’s kudos to FLOTUS for introducing us to Kimberly’s beautiful artistry.

The New York Post reports that McDonald was walking her four Chihuahuas in the Hollywood Hills when she heard the news of her inaugural jewels’ unveiling. The phone started going crazy and that soon after her computer network crashed. Her tweet from the Inaugural evening says it all:  “Thrilled and honored to have Mrs. Obama in our creations tonite.”