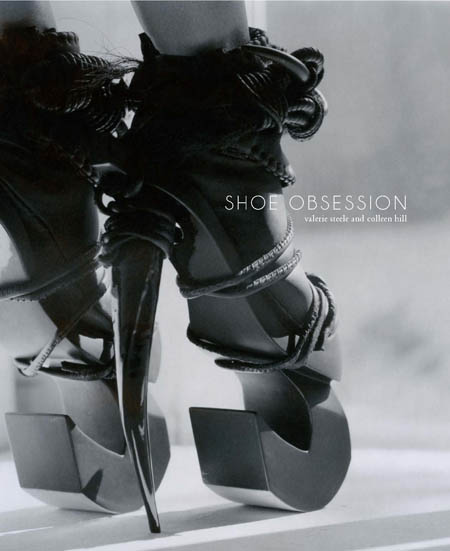 “There is a little bit of Imelda Marcos in every woman.”

The stars were out en masse at The Museum at the Fashion Institute of Technology (@museumatFIT) in New York City recently. Names like Blahnik, Louboutin, Vivier and Kirkwood beamed, twinkled, stood tall and even shocked some viewers!! Up-and-comers like Charline De Luca were there as well! The stars were shoes–all 150 pairs of them!  I must admit trotting in with my studded black suede clogs humbled me in this stratosphere of design. However, it did not deter me from thoroughly enjoying mingling with the “stars,” the guests and fashionably perfect curators.

The reality is that there are shoes and then there are….. SHOES!!! Function has moved to fascination and now to SHOE OBSESSION, the title of this amazing collection of footwear. Museum Director and Chief Curator Dr. Valerie Steele and Assistant Curator of Accessories Colleen Hill drew on the last 10-12 years to exhibit some of the most beautiful and interesting modern shoe designs.

They also wrote essays for the like-titled book, SHOE OBSESSION, published by Yale University Press,which captures the 21st century shoe styles. Royalties from the sales will benefit the Fashion Institute of Technology (FIT).

In a darkened room, the designers’ shoes were spotlighted in rows of tall glass tower columns. Guests meandered through the corridors of showcases smiling, oohing and ahhhing. Overheard were some quizzical hmmms.

Some of the shoes were from the designers themselves; others were from private collections. The highest heel belonged to Noritaka Tatehana’s Lady Pointe Shoes with 18″ platforms. Those were most talked about along with Louboutin’s Fetish shoes.

According to Dr. Steele, women shop for shoes that express their personality.  Shoes are central to fashion, not just accessories. They are the main story. And, just within the last ten years they found the average American woman owns 20 pairs of shoes, double what it was 20 years ago. In a totally informal survey of ten friends, I indeed found they all had at least 20 pairs of shoes, including sneakers and boots, of course.

But what about the always popular handbag, clutch? Well, as pricey as shoes can be, they are still less expensive than the “IT” bag. Shoes can be very functional, very wearable and comfortable and have great artistic, fashionable appeal. Dr. Steele says it’s now all about the shoes with a nod to one of her favorite quotes, “There is a little bit of Imelda Marcos in every woman.”

Charline De Luca, one of the up and coming shoe designers from Rome, Italy, says her high heels and sleek look are a signature. She was an architect, working for Fendi before being encouraged to pursue shoe design. Charline is inspired by the art world, thinking about new collections every day and even taking notes on napkins when she’s out to lunch. She loves the linear, clean and the feminine look created by Chanel.

When I asked Colleen Hill about the soaring heights, diverse materials and avant-garde shapes, she said that the modern designs are “all about experimentation. The increased popularity of shoes has allowed for that.” As far as the high, sky high heel, designers seem to be paying homage to history. “High heels are the prime sartorial symbol of femininity,” she added.

Colleen also sees shoes as investment, similar to what an art piece would be. “In fact,” Colleen goes on to say, “women are buying what may be trendy this year, wearing them a little longer, and then bringing them back out years later for their outfits. They get a lot of wearability out of their shoes.” They also found women are buying their shoes first and building their outfit around them. Right now, she says, “We are seeing more subdued clothing with extravagant shoes in high fashion.”

And where do shoes go from here after all these sky-high heels, platforms, studs and straps? According to Colleen, “We are seeing a return to the sexy shoe which is basically a single soled shoe, more like the Manolo Blahnik but continuing the embellishment and craftsmanship and exquisite materials.”

The fun fact I learned was that probably the most knocked off, imitated designer is Louboutin–the platforms, the very high heels and of course the red sole and embellishments.

The idea of unique shoes popping up for the Fun Stuff column on TWE is nothing new, but this exhibit certainly showcases an extraordinary collection of shoe designs beyond some of our wildest imagination.

This fascinating Museum at FIT was founded in 1967 and is one of a very few museums in the world devoted to the art of fashion. It now has 50,000 garments and accessories from the 18th century to present day as well as textiles and other fashion related items. The Mission Statement states that the Museum serves as a “think tank for scholarly publication, new initiatives, and research opportunities for students, scholars and designers.” We can’t wait to come back and be inspired by future exhibits.

Azzedine Alaia, 2011 from the collection of Lynn Ban  | Photograph ©The Museum at FIT