Impressionism Meets Fashion at the Metropolitan Museum of Art

By Pamela Burke/May 26, 2013
Photographs provided by The Metropolitan Museum of Art

We didn’t walk, we ran to the Metropolitan Museum’s Impressionism, Fashion & Modernity exhibit in New York City recently. Where would you ever find over 80 major figure paintings by the likes of Manet, Monet, Degas, Cassatt and others on display with the fashion of the day? We thought it would be a one of a kind experience, and the show did not disappoint.

The galleries were organized to feature different categories of costumes, beginning with the British, French and American Day Dresses of the 1860s. The fabrics were what caught the Eye, everything from crinolines to cotton piqué to piqué with soutache.

Soutache was a new word to us but we found out it simply meant flat, narrow braiding inspired by military uniforms.

A room with exquisite White Dresses the likes of which could be seen in the paintings of Edouard Manet, James Tissot and Berthe Morisot followed.  The fabrics again stole the show, including a dress in bleached linen with matching sash and a seaside ensemble in cotton with machine embroidery.

The Black Dress gallery followed with garments known as the staple of fashionable 19th century women. An Afternoon Dress and one in organza worn for receptions were on display. A quote on the wall by Pierre-Auguste Renoir said it all: “Black is the Queen of color.”

Our favorite costume was the actual summer dress worn by Madame Bartholomé in the famous Albert Bartholomé  painting In the Conservatory, 1880. This white cotton frock with its purple dots, stripes and precise pleating was a showstopper. This treasure of a dress was preserved by Bartholomé in memory of his wife.

We were drawn also to the beautiful accessories of the day in rooms with straw-trimmed bonnets of the 1880s and French fans with lithographed prints. Dainty pink shoes in their original form with accompanying etchings were a statement in femininity. There was much more to see including the exquisite modern “urban” wear and evening dresses, but it was difficult to take it all in during one visit.

Unfortunately, the show is ending its New York run May 27, but will continue on to Chicago, opening June 26 at the Art Institute. If you love fashion and long to see exquisite designs of centuries past, this show is a must.  Just to see these special paintings is a treat in itself.

If you can’t visit the exhibit, you can view it all in a beautiful book, Impressionism, Fashion & Modernity.  Because we feature so many stylish hats on this website, we wanted to include a favorite painting on display, Edgar Degas’ The Millinery Shop, 1879. He was known as a close observer of women’s fashion. You can see the subject of his special interest below. 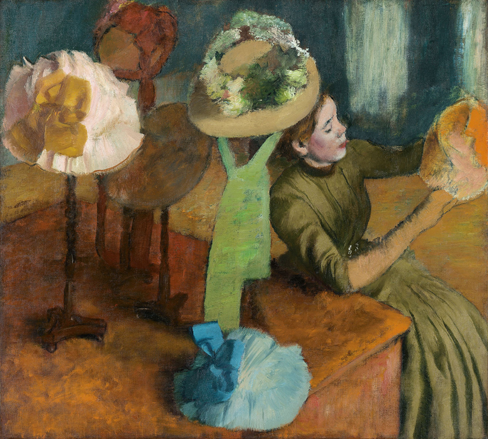