“In the early days, the chimps ran away every time they saw me–they had never seen a white ape before. ” Jane Goodall

Dr. Jane Goodall–who in her twenties left the comforts of her home in England to live in Africa and study wild animals–was one of my childhood heroes. I leapt at the opportunity to hear her speak about her new book, Seeds of Hope: Wisdom and Wonder from the World of Plants, as part of Dominican’s Leadership Lecture Series with Book Passage. 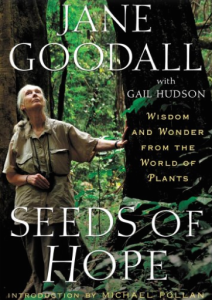 Jane spoke to a packed house about the early days of her now-famous chimpanzee research in Tanzania. After moving to Africa in 1957, with little more than an ardent desire to live and work among the animals there, she began what would become her 45-year study of wild chimpanzees.

She discovered that non-human animals make and use tools, which forced scientists to redefine the relationship between humans and other animals. And she has become a preeminent and persuasive force for improving animal welfare around the world.

So I was surprised to hear that Goodall was lending her impassioned voice to the cause of saving plants, and further, that she did not advocate the widely-accepted adage to “think globally; act locally.” “If you think globally,” Goodall advised, “you don’t have enough energy left to act.”

She should know. Goodall has visited a lot of the globe, traveling to countries as diverse as Argentina, China, France, and even North Korea with her urgent message about the importance of conservation.

Around the world, and especially in Africa, she has seen far too many of what she describes as the devastating aftereffects of colonialism, including habitat destruction, plundering of resources, and (she says it almost under her breath) slavery. “Some multinationals today are pretty much the same,” Goodall observes.

Traveling in Africa, Goodall met youth who were apathetic and depressed, or angry and violent. When she asked about their attitudes, they told her the truth: “We feel you have compromised our future, and there is nothing we can do about it.”

She knew they were right; the youngest generation had a good reason to feel hopeless. But Goodall had grown up in an atmosphere of hope and hard work, and she had a vision.

So in 1991, along with twelve Tanzanian high-school students, Goodall founded Roots & Shoots, a “youth-led community action and learning program” aiming to create positive change. Each local group works on three service projects of their choice: one for people, one for animals, and one for the environment, with an emphasis on determining what projects will be most helpful locally.

Today, Roots & Shoots engages more than 150,000 members in 136 countries, with projects ranging from preserving monarch butterfly habitat to baking homemade pumpkin pies for people who are hungry at Thanksgiving. And every project reinforces Goodall’s hopeful message: “Every single one of us makes a difference, every single day.”

At 80, Jane Goodall is still making a difference. Her recent birthday wish was to move 100 chimps from the Tchimpounga Rehabilitation Center to three pristine, forested islands where they would be able to live nearly wild.

Many of the rescued chimps had been orphaned as youngsters; their mothers had apparently been killed for bush meat. The Wildlife Conservation Network decided to host a birthday party for Jane to raise the needed funds, and Jane’s friend Dave Matthews joined in to serenade Jane and her birthday revelers.

Together, they raised $1.25 million that evening–enough money to move the rescued chimps and allow them to live in freedom on the islands, but still have access to medical care if needed.

A Chimpanzee Hugs Dr. Goodall after being released into the wild.

As the video above shows, Jane not only cares deeply about the chimps–she also communicates with them. Although she was not the primary caretaker for the chimp shown in the video, it is Jane who receives a heartwarming hug from the primate, after she speaks a quiet “word” or two as the chimp sits atop its cage.

These days, Jane she sees herself primarily as a communicator.In response to a comment from an audience member about her being a world teacher, she emphasizes, “I love writing. I seem to be able to have an impact. I try to develop the gifts that I have. You say teaching; I say communicating, sharing, telling stories.”

“One of the most important things is to work with the people living in the area. We have become partners with them. That is the only way to get conservation to work anywhere.”

Jane also understands that the only way to save chimps–and the many other species that are endangered–is by saving their habitat. That is one reason why the latest book from this champion of chimps is about plants: their beauty, their healing properties, their adaptability and most of all, the essential role plants play in supporting life on earth.

Seeds of Hope (Grand Central Publishing) is a joyous paean to plants, and it’s fun to read. Jane shares her enthusiasm about plants’ awe-inspiring diversity: “Some seeds germinate only when there’s a fire. This is really interesting–it took people a long time to realize that … certain plants only grow if there’s rain coming through the smoke of a fire. That’s part of the beauty of this book; it makes us rethink.”

Seeds of Hope also encourages us to rethink other subjects Jane Goodall feels passionately about: the use of genetically modified plants, for example, and the importance of growing our own food rather than banking on a future dictated by corporate mega-farming, bioengineering companies, and big pharmaceuticals.

“Medicinal plants are being patented! I’ve always been utterly shocked that you can patent life. That actually can be done. Somebody went to court the other day–they wanted to patent a chimp. The proponents will always talk like this [bioengineering] is a very precise science; but it isn’t,” Jane explains.

What is her best suggestion for decreasing the environmental impact of food production? At this question from the audience, this passionate vegetarian pulls her diminutive frame to its full height. Her shoulders have a distinctive slope–which one might expect from a scientist who has spent decades hunkering down as she observed wild primates.

Her voice is clear and strong, almost a shout.

“It’s easy. Stop eating meat! We have the gut of an herbivore–a very long gut to maximize [the ability to absorb nutrients]. Carnivores have very short guts, so they can get rid of the meat quickly before it starts rotting.”

In fact, Jane insists that the health benefits she gains from being a vegetarian are the only way she can keep up her rigorous schedule of traveling 300 days a year, giving lectures, sharing her stories, and advocating for a more harmonious and sustainable world.

She introduces us to her traveling companion of the last 26 years, named “Mr. H.” It’s a stuffed animal that is meant to be a chimp (except that it has a tail, which chimps do not) and was a gift from admirer Gary Horn. Although Mr. Horn (the man) is blind, he has followed his dream to become a master illusionist, entertaining and inspiring children around the world.

He inspires Jane, too, reminding her to “Never give up. There’s always a way forward.” Mr. H (the chimp-with-a-tail) works his own kind of magic: “When you touch him, the inspiration rubs off,” Jane says.

At the end of Jane’s lecture, our host brings out a surprise birthday cake to celebrate her 80th birthday. The full house sings an enthusiastic “Happy Birthday” and Jane blows out the candles. Then the beloved primatologist–ever the communicator–rewards us with a very particular rendition: She imitates the excitable call a chimp would make for “Cake!”

We give her a standing ovation.