PERSON OF THE DAY: Author Kristi Ling’s 3-Step Plan To Being Happy

When I sat down to read Operation Happiness: The 3-Step Plan to Creating a Life of Lasting Joy, Abundant Energy, and Radical Bliss, it made me happy. And it was not because it promotes the “11 Habits of Happy People,” or that it comes with a “happiness tool kit.”

This part memoir/part self-help book made me happy because my friend Kristi Ling wrote it. I’ve known Kristi for many years. She was always a bubbly, positive, glass half-full kind of gal, but I never realized during that time, she was also on a mission: to help others find true happiness that had eluded her for years.

“I never gave up. When you’re on a path to giving and sharing whatever it is you have to share with the world, the doors will open.”  Kristi Ling

Over the past decade, Kristi endured a devastating divorce, a soul-sucking corporate position and, most frightening of all, a rare illness that left her unable to use her left shoulder, arm or hand for over a year. But instead of wallowing in self-pity, she got to work.

Kristi poured over happiness research, scientific brain studies and other books on “how to be happy” full-time. Four years ago, she was “heartbroken and thought her life was over.” She says now of those difficult and painful years, “It was a means to get to where I am today along with everything else I’ve been through in my life.”

Kristi’s Book Trailer
This is her first book and after its release last month, she was overwhelmed by the positive response from “old and new friends and many, many, many people she never met before.” She says she invested countless hours into getting her message out.

“I did not want this to be the tree that fell in the forest that nobody heard. I wanted it to be out there helping people — those nuggets of wisdom, or that one thing, that helps create that shift that puts others on a new path,” says Kristi.

This happiness strategist and life coach is now a successful speaker as you can witness in this TEDx talk.


I got to hear her latest talk at a book signing in Las Vegas at The Writer’s Block surrounded by friends and happiness seekers. I am a proud supporter – Kristi was there for me once when I was having my own big life crisis – so I want to share some of the important nuggets I learned that night.

KRISTI ON GRIEF AND LOSS:

“Is there anything in the book about divorce? Oh, yes! That was the first time in my life I experienced that bone-crushing grief that comes from losing somebody who you love so dear, who is a huge part of your life. I realized that grief is a personal thing.

Before my divorce, I started writing a proposal for a book on happiness. I was a ‘happiness’ blogger at that time, and then all of a sudden, my life exploded. Sometimes I felt like a fraud. But I thought this is going to be my greatest opportunity for transformation.

So what that kind of grief did for me in my life was made me so much clearer on two things: #1 — I thought I was the last person to write a book on happiness.  But I realized all the work that I had done in the practice to change my own life had supported me so greatly during that time of grief, that I came through it much better than I would have if I hadn’t done all that work.

And #2 — I learned a book on happiness without a chapter on grief and loss is like a car without windshield wipers. Everything is great until it rains. Then you’re stuck. So many books I had read on happiness did not include this so I knew when I started writing again, the book had to have a chapter about happiness through dark times. Even the happiest people have grief and loss.”

ON NOT GIVING UP:

“I knew I had something different to say. It came from my gut and my heart and kept me moving forward. And when the time was right, the book happened. I never gave up. When you’re on a path to giving and sharing whatever it is you have to share with the world, the doors will open.

They may not open when you want them and it may not be your ideal time, but you have to trust. For me that was the biggest thing I learned: trust life.”

ON FINDING THAT “THING”:

“Let’s go back eight years. I worked in a corporate environment. I was 31 years old. I was depressed; the job was robbing my soul. I felt empty. No matter what I achieved, I still was empty inside. But one morning, around 4 a.m., I was shaking; my heart was pounding out of my chest. My body was telling me this is it. I can’t keep going or there will be consequences.

I quit the job and started my own boutique PR business. I also continued my studies on happiness. I devoured everything but I still hadn’t reached that level of happiness that I was looking for or that I knew existed. I saw other people that had this thing but I didn’t know what that thing was.

Then, in 2008, I woke up and wasn’t feeling right. Within 24 hours, I completely lost the use of my left shoulder, arm and hand. A doctor told me the good news is, it will go away. The bad news: it will take one to three years.

I thought, ‘What am I going to do with this?’ I couldn’t work; I had to do everything with one hand. I had to go within. It was very humbling and taught me not to take anything for granted. During this time, I decided to use this time to really dive in and make happiness my top priority, every single day. It was such a painful condition — the pain reminded me to focus on myself.

Fourteen months later, I came out of the illness and started working again. I had changed as a person not just in my mind, but in my cells. I was a different being. The way I was seeing the world was different than I’d ever seen it before.

I now had a sense of how to handle things and so much more happiness than I ever imagined possible. Was life perfect? No. But life was so good. It stopped me in my tracks. I found that thing!”

ON HOW SHE GOT HERE:

“I knew my transformation was important but I was determined to find out how I did it so that I could put it into sharing it with other people. I learned two things: #1 — I read a quote by Aristotle, who said: “Happiness is a state of activity.”

All the experts say happiness is a choice. But no! There is action involved. That’s when I realized happiness is a skill. We can learn and practice and get good at it. When I started approaching happiness this way that’s when everything changed.

And #2: I learned about a new science called ‘Neuroplasticity.’ In a nutshell, it is our brain’s ability to rewire itself based on changes in our behavior patterns or changes in surroundings or thought patterns. When I learned about this, that was exactly what I did when I was sick. 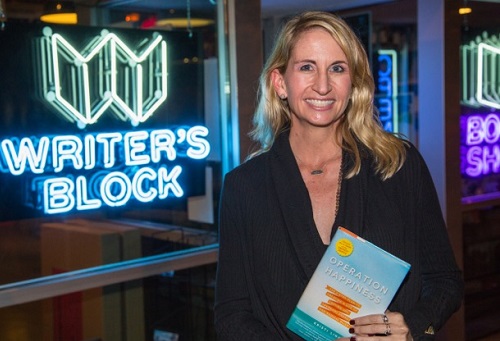 I dedicated myself to be completely focused long enough on happiness, self-care and self-love that when I came out of that illness and time period, it all came naturally because I had rewired my brain scientifically. The book touches on neuroplasticity on only two or three pages, but the essence of the book is about that.

Those two things combined with many of the tips in the book – done regularly, for long enough – will help you make the same transformation that I made.”

“The book is broken down into three parts. Part One is Change Your View. Happiness is not just a choice or feeling but as a skill that we can learn and be good at.

And Part Three is Create New Habits. What we want to do is lose some of the habits that drain us. Then think of the things that you can add more of into your life that bring you joy and create habits out of them so they are there to support you and elevate your happiness to a new level.”

“How can we get back to treating ourselves with the love that we deserve to be treated with? So many times we treat ourselves in a way that we would never treat other people. Learning to treat oneself with love and compassion is such an exercise. It takes such dedication and is so important to living our happiest life.

Kristi says she is ready to launch Operation Happiness: The Online Course followed by a workbook and one-on-one courses. She already has another book in the works that will explore love-based choices that come from your soul.

In the meantime, she hopes we all will take the time to rethink happiness and retrain our brains. It takes a little work but it’s all worth it. Kristi, I’m on it!!!