Author Kelly Corrigan on the ‘Glitter and Glue’ of Motherhood

UPDATE 2/20/15; Paperback edition of Glitter and Glue is out!

“The coolest thing about the coolest people I knew was that they had made great families. Families with inside jokes and nicknames and dance moves. And that’s the shore I set out for.” Kelly Corrigan

Let me put Kelly Corrigan up on a pedestal for you. She’s on one for me. Kelly survived breast cancer and chemo and an ominous ovarian growth, and braved it through her beloved father’s cancer and her young daughter’s meningitis.

She has a page on Wikipedia and is, in her own somewhat surprised words, a “YouTube sensation”–a video of Kelly reading her essay about women’s friendships over time, Transcending, went viral with nearly five million hits.

Kelly co-founded Notes & Words, a charitable organization that features bestselling authors and top recording artists on-stage together, and has raised more than $4,000,000 dollars for Oakland’s Children’s Hospital and Research Center.

Oh, and she has written three New York Times bestselling memoirs. Three memoirs–and she isn’t even fifty yet! I loved Kelly’s coming-of-middle-age story called The Middle Place, so I attended Dominican University’s Leadership Lecture Series with Book Passage recently to hear her speak about her latest book.

The first time I heard Kelly speak it was at this same venue where I covered her interview with another bestselling author, Elizabeth Gilbert, just a few months ago for TWE. Their discussion ranged from science to shoes to spirit, so I was eager to learn what Kelly would choose as a subject. 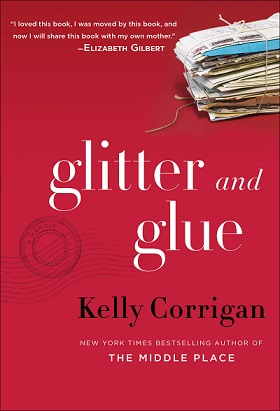 The evening began with a video of Kelly saying a few words about her new book, Glitter and Glue, A Memoir (@randomhouse), which explores the emotional intricacies of parenthood and the bond between mothers and daughters. I was surprised to learn that such an accomplished woman was fascinated with the minutia of family life.

“Your father’s the glitter, but I’m the glue,” Kelly’s mother told her years ago, summarizing their roles: father as a fun friend, mother as tactician and disciplinarian. Glitter and Glue is ostensibly about that difference–between adventure and life experience, fathers and mothers, fun and responsibility.

But the truth is that Kelly has reconciled the two with her understanding that everyday family life is the greatest adventure of all.

“The coolest thing about the coolest people I knew,” Kelly said, “was that they had made great families. Families with inside jokes and nicknames and dance moves. And that’s the shore I set out for.” It took Kelly less than five minutes to elevate domesticity to an existential art form.

“This abstract performance art called family life is our one run at the ultimate improv, our chance to be great for someone. It’s happening right now, whether we attend to it or not. This is it. This is the great adventure.”

At the end of the video the audience erupted in applause, and Kelly–not yet officially on-stage–peeked around the curtain, grinned, and waved like an over-eager five-year-old at her first school play.

The audience is immediately captivated with Kelly’s we’re-just-a-bunch-of-girlfriends brand of charm. She shows up in a simple navy blouse and skinny jeans–very skinny jeans–telling us she’s been on tour for twenty-eight days, and is so glad to be back home in the Bay Area, which she swears has the best food, the best people, the best clothes.

Then Kelly starts dishing on her mom.“My mother’s a little like the Maggie Smith character on ‘Downton Abbey.’ She has what my friend Betsy calls a BRF–a Bitchy Resting Face–and she’s fiercely devoted to her family.” Kelly puts on a bitchy resting face, so we can see what she means. A little later: “Mom loves sauerkraut, anchovies, and pearl onions–pearl onions! If you were writing a villain, wouldn’t you have her love them?”

But this is just to set the stage. In the same way that Kelly has reconciled her one-time longing for “a huge odyssey” with a deep appreciation of the grand adventure that is domestic life, she has also reconciled with the mother who battled her for years over blow-dryers and spending money and curfews, over political views and making wedding plans and baptizing babies.

Most of Glitter and Glue is a flashback to the five months in 1992 when Kelly worked as a nanny. As a twenty-four-year-old she had gone off on a backpacking adventure, a global odyssey that would surely make her an Interesting Person.

But finding herself in need of money, Kelly took a job in a suburb of Sydney, Australia, looking after two young children whose mother had recently passed away. The experience of caring for children–for the first time in her life–brought an appreciation of her mother’s expansive skills and mighty competence.

What about her own family, now? Is Kelly the glitter or the glue? Although she wouldn’t mind glittering, it turns out Kelly is the glue, just as her mother was. She is the one who supervises homework, keeps a watchful eye out when the girls are on the ski slopes, and manages “the unsettling situations that often bubble up right around bedtime.”

“I’m the CEO,” Kelly says. “Edward [her husband] is like the chairman of the board. He only comes in for board meetings, and he gives me some tips, like, ‘I just came up with a few things when I was flying across the country first-class, some ideas that might help.’”

But it’s her mother that Kelly calls on when she needs “tips,” advice, perspective, or encouragement. “I have come to admire [my mother] so much for so many things… She had so much stamina. She had so much fortitude and grit, to stand the constant negotiation.”

“Now,” Kelly says, “give me almost any situation–termites, refinancing, or back pain, allowance, mean girls or sibling rivalry, a child’s despair, a husband’s inattention, or my own spikes of rage and regret–and watch how fast I dial her number.”

Kelly may still be dialing her mom, but she has come into her own as an author, a philanthropist, and an inspiring figure for anyone attending to the Great Adventure.